On most days, I'm a pretty honest guy. But for the past few days, I've been considering turning to a life of crime and planning a heist. I knew when and where there would be several truckloads of Girl Scout Cookies. And since the Girl Scout Pledge start with the words "On my honor," clearly there was going to be no security.

Each local troop was assigned a time to load up on their cookies. We were there for two troops whose orders filled two pickup trucks and an SUV. Took about 15 minutes to load everything. The truly impressive sight was seeing large moving vans filled to the brim with cookies. To borrow a phrase from the Profussor, one truck was filled with a shit-ton of Thin Mints. This is one troop's allotment of Thin Mints. 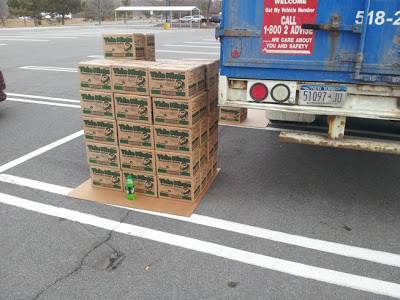 Other cookie varieties shared space on the same truck. 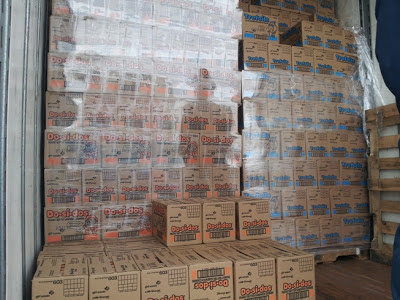 I didn't pull the trigger so I've got a year to come up with a plan of attack. I'm considering going the Thomas Crowne Affair route. Any co-conspirators out there? Taking cookies from little girls would be almost as easy as taking candy from a baby. I wonder if we'd be able to hit a milk truck that afternoon....

As with last year, here is the extremely scientific survey of Girl Scout cookie popularity. 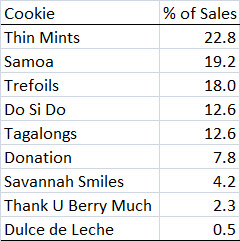 This year the Thin Mints took a hit but still remained king. Two large orders may have skewed the results. My brother Mike switched his case order of Thin Mints (he gives them out as gifts - at least that's what he says) to Trefoils. Plus a friend from the curling club ordered an additional 10 boxes of Trefoils (he's definitely not giving them out as gifts).

One thing that is interesting to note in the stats: more boxes of cookies were donated than the combined sales of Savannah Smiles, Thank U Berry Much and Dulce de Leche. I think that pretty much sums up the quality of those cookies, although there are people out there that really like Savannah Smiles. I don't get it. However, these Savannah Smiles lovers are probably very nice people that would never dream of stealing truckloads of Thin Mints and Samoas, unlike certain other people we know...
Posted by Jon in Albany at 11:00 PM