I was on my own in an unfamiliar city. I vaguely remembered hearing about good Neapolitan place awhile back on Twitter.  So I tweeted off to OG Woodfired Pizza in Buffalo for his recommendations. He suggested Fiamma e Vino but he also passed on my suggestion request to some people he knows in Rochester. Here's the list (in order of strength of recommendation) I got.

1. Fiamma e Vino
2. Fiorella
3. Branca
4. Amore (but that recommendation came from word of mouth, no visit)

Fiorella is closed on Tuesdays so I was left with 3 places. Looking at the map, the easiest order would be Fiamma, Amore, then Branca. This route would give me about a 15 minute drive between places to recuperate.

Fiamma looks like a nice neighborhood restaurant. It's a little bit dark inside but nicely decorated and has an open kitchen. I asked for whatever pizza they thought was best that had sauce. I could see the waitress punch in the order at the servers stand and then the ticket came up at the pizza station. Then my waitress disappeared. The place wasn't crowded so the server should have known that the pizza was going to be ready within 5 minutes of placing the order. The pizza came out of the oven, the pizza maker rang the bell and then went off to do something else.

The pizza sat...I wasn't timing it, but it felt like at least 3 minutes.
I almost went to get it myself but thought that would be pushing it.
The pizza maker came out, saw the pizza, rang the bell and went away. The waitress still wasn't in the room.
This happened one more time. Still not there.
Then she appeared, gave me some bread and cleared another table still not realizing the order was up.
The pizza maker called over another server and told him to let her know and put the pizza in back.

He wasn't going to serve it. It sat too long. He made me another.

This time she was waiting for the pizza when it was plated. It was the Capricossa - sauce, parma cotto, mixed mushrooms, mixed olives, mozzarella,  basil and olive oil. I thought the dough could have used a little more flavor but the topping combination was really good (going to steal it) and I inhaled the whole pizza. I liked the way the pizza was served too, uncut on a plate with a pizza cutter tucked under the pie. I'd sow you a picture but the restaurant was too dark and I'm not brave/stupid enough to take flash pictures in a dark restaurant.

I figured I'd try one of their white pies too. I got the San Danielle - mozzerella, cherry tomato, baby arugula, San Danielle prosciutto, shaved parmigiano reggiano and a balsamic cream. Now this pizza maker clearly isn't screwing around...when he was brought the freshly sliced prosciutto he showed the person that did the slicing what was wrong with it (I couldn't ell what he said but he held up a slice and pulled) and then sent him back to slice more. If he's not happy with a pizza, it's not going out. This pie was also very good. I liked the way the crust was cooked a little better on this pizza - less (but still some) char on the crust and more of an even browning. I only ate half of this one and took the rest to go. I'd like to come back with 10 people and try a lot of the menu. A few items look really delicious. But there was more pizza to try and I was on the clock. Amore closed at 9:00 and it was almost 8:00.

When I looked up Amore, I saw the full name was really Amore Italian Restaurant and Wine Bar, by Wegmans. Are you kidding me? A Wegmans restaurant. What I didn't realize is that Amore is tucked in the corner of a really big Wegmans grocery store. But once you are inside, you are in an Italian restaurant. No idea that a produce section is 50 feet away on the other side of the wall. And it's nice inside too. And at 8:00 on a Tuesday night, the place was jumping. The food being served around me looked good. The guy to my left had a steak and there was a pork chop special with speck and pancetta. This looked like a decent restaurant. 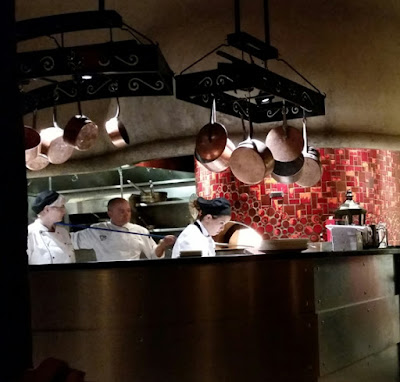 I considered going with their prosciutto/arugula pizza to compare but went with house made sausage instead. I was served this in a freakin' Wegmans. 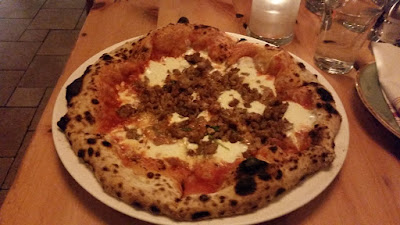 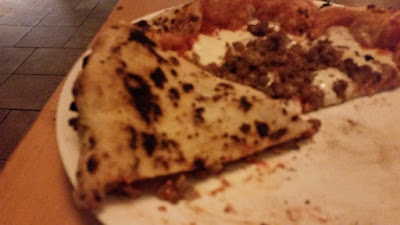 And it was good too. Not great but good. I've paid more for worse. The sausage was flavorful and salty in a good way. A few spots went past char to burnt. So now there are two restaurants in Rochester that I want to go to with 10 people so I can try everything. I considered popping into the grocery side for a bottle of seltzer to help with the quest, but at this rate I was going to get to Branca around 9:30 and they closed at 10. Back into the car and off I went.

Branca is in kind of a fancy looking building. I think there was a salon there too. I could see a bunch of people still sitting at the outside tables as I walked in hoping I wasn't too late for a pie. Turns out I wasn't so I sat down at the bar. The bartender recommended The Branca - mozzarella, basil, house made spicy pork sausage, pecorino romano and San Marzano tomato sauce. Once the order was sent in I started talking to the bartender and bar manager, both really nice guys. We talked booze and pizza. They both like the idea of a pizza quest to kill a night alone in a strange city. Here's The Branca: 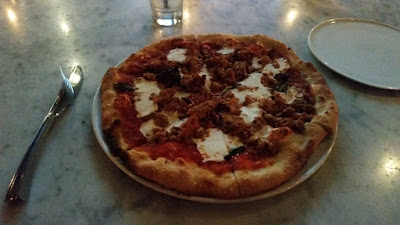 I feel a little bad comparing this one to the other two. It definitely had some good qualities. The topping were good. The sausage had good flavor with a little bit of zip. The texture of the sausage seemed like it was braised Bolognese style which was unexpected. But the crust was crunchy and felt a little oily. I don't mean to imply there's something wrong with a crunchy crust, it's just not the same style of pizza. For what it was, it was OK, not great. Branca had a fancier, special occasion dinner feel to it. I was told the chef that opened Branca left for Amore and took his pizza with him. Then Branca's pizza evolved to its current form based on customer preferences.

After Branca, I went back to the hotel to pass out. I had a bar recommendation and they were even running a PBR and PB&J special with trivia - how could that not be interesting? But I was on my own and this bar was not within walking distance of the hotel - technically I guess it is but I was not up for a 12 mile round trip walk although I probably could have used it. Maybe next time.


At the end of July, I had the oven stand pretty much laid out. Time to work in august was a little hard to find but eventually every other core was filled with concrete 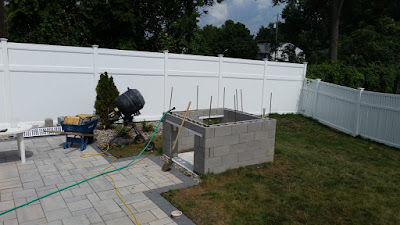 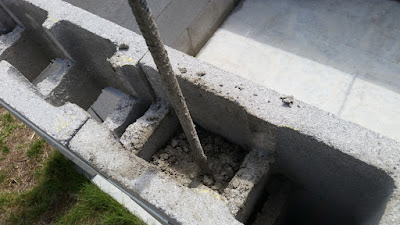 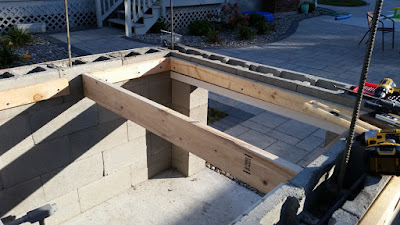 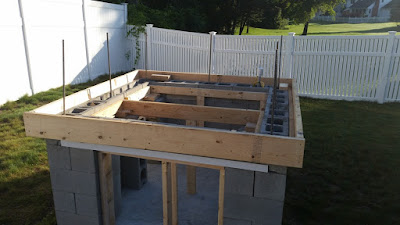 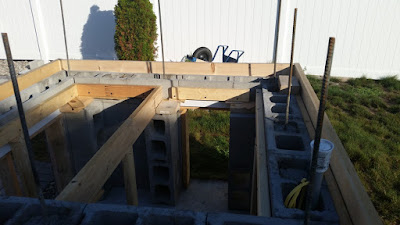 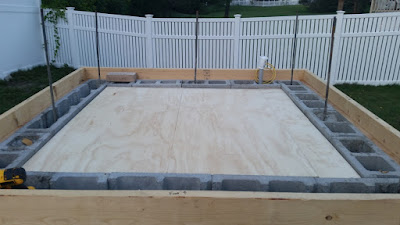 I put in some rebar 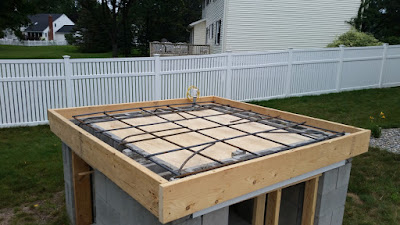 and concrete was poured 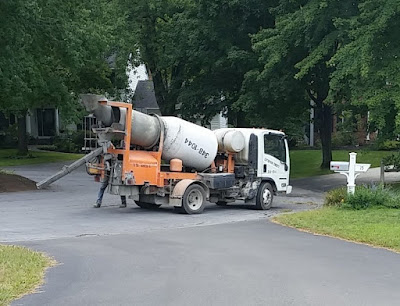 Yeah...i probably over paid a little for the concrete, but I know my back appreciates it. The right amount of concrete in 50 pound bags from Lowes on sale right now would have cost a little over $100. But, to get that back to the house in my van would have required at least 6 trips and a lot of handling of 2500 pounds of dry mix concrete - put the bags on a cart, wheel the cart to the van, load the van, unload the van to a dry spot, move each bag to the oven, lift and empty each bag into the mixer (which is a little of a balancing act), empty the mixer to buckets, lift buckets into the form.

Instead, for $250, I got more concrete than I needed delivered off a little mixer from Clifton Park Concrete. Plus the owner/operator of the company is incredibly nice and on time...actually a few minutes early.

I bought a cart at tractor supply. My idea was to put six, 5 gallon buckets half filled with concrete and wagon them over to the oven. It worked out great, the pour went pretty smoothly and we only lifted concrete once. If I get I chance tomorrow, I want to take down the rest of the form work. Hopefully the bottom face of the slab looks good. If not, I'll crawl in there and pretty it up. And big thanks to Ryan who showed up after work to help with the pour. 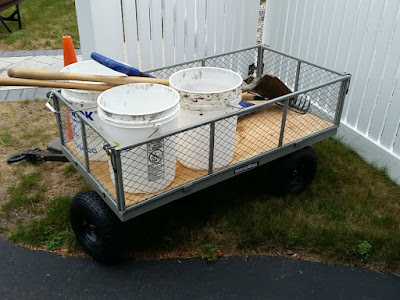 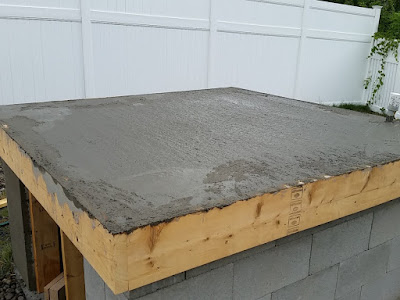 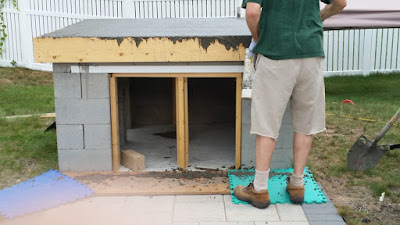 Then this weekend I poured the base insulation. It is a 5 to 1 mixture of perlite and Portland cement. You add enough water to make it look a little like oatmeal. After 12 hours of curing, I was starting to wonder if it would ever harden up. It was still pretty flaky. After 24 hours, the perlcrete was starting to feel solid. 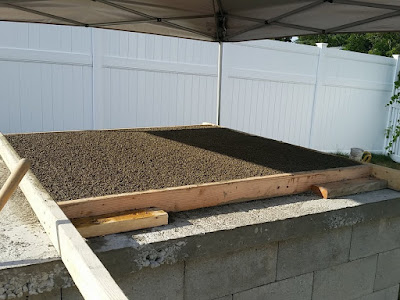 I've got a few more things to run down. I was planning to get everything from Grimm in Green Island but the don't have a supplier for fire clay anymore. I think I found another place to get some. But while I was at Grimm I did pick up Round 1 of bricks and a bag of high temperature mortar. I still have another question or two to ask the forum guys about the build but it's almost time to stop drawing sketches and start cutting bricks.
Posted by Jon in Albany at 11:22 PM 6 comments: