Tomorrow afternoon, our two steers will be slaughtered. I'm not the best writer or communicator (just ask my wife) so it is difficult to express how I feel about it. I wholeheartedly believe my participation in raising these animals has changed the way I look at food and the way I cook. I would argue the experience has improved both. And even though I have already participated in slaughtering steers, it is still...the anticipation is really strange.

UPDATE: The weather has postponed the slaughter to a date still to be determined.
Posted by Jon in Albany at 11:31 PM No comments:

Earlier today there was a giveaway at the Table Hopping blog for a grilling book. As usual, Steve Barnes asked a question to be answered for entry into the giveaway. Today's question : "Gas or charcoal? Why?" There were 83 comments left as entries to win a grilling cookbook. Being a nerd and a charcoal guy, I had to see how the votes fell. Some people didn't fully commit and reported using both and others said they used gas but preferred charcoal. In the end, about 55% use gas, 40% use charcoal, and 5% use both or didn't really state a preference.

I was surprised that 40% use charcoal. I didn't expect that many pro-charcoal responses. I was thinking more in the 25% range. Well done Capital Region. Here are a few things that might help convert a few more people to lump charcoal.

A chimney full of lit coals is screaming hot. The Ove Glove or welding gloves help out.

Wondering if the brand of lump charcoal you saw in the store is any good? These guys have probably tested and rated it. They have also compiled user ratings as well.

And finally, if you are like me and don't really care for the lump charcoal sold at Home Depot or Lowes (usually Cowboy brand), you can order Royal Oak lump charcoal from Do It Best and it can be shipped to a local hardware store for free. The Phillips Hardware store on Central has handled this for me several times. Very nice people there and it is a good hardware store too.

Now invite someone that uses gas over in the middle of the week and show them how easy it is to use charcoal.
Posted by Jon in Albany at 10:10 PM 4 comments:

I am off to spend the weekend in Boston. Should be fun. Good friends, good food, no kids (my mother in law is a Saint). How bad could it be? Before I go, I'm going to wrap up Project #4 - Smoke. The kielbasa was just below eh. 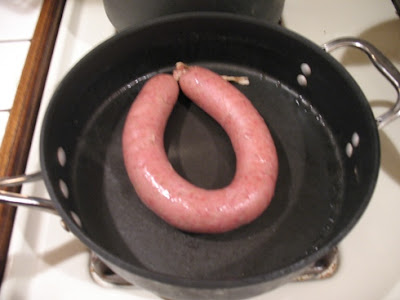 I grilled a bunch of it and it was way too salty. I tried simmering the rest in water to remove some salt, but it didn't work. The other issue was the texture. It was strangely spongy. Didn't really work for me. I had a similar problem the one time I tried to make my own hot dogs, so it is possible that the texture issue is operator error. 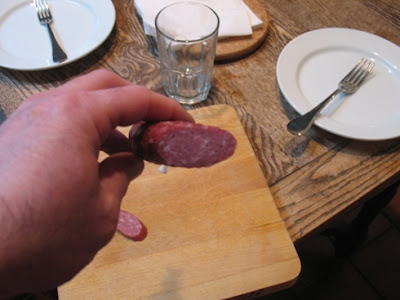 The summer sausage, on the other hand, was a hit. Kids liked it. I liked it. Wife like it. Neighbors liked it. A success. I thought it was better at room temperature than cold. It also took nicely to Dijon mustard. I might add a little more smoke next time and I will be making this one again sometime. I ordered some more sawdust for the little cold smoker. I didn't realize it earlier, but that got shipped from Olean, NY. Which is one town over from my favorite bartender and her spit cup. Small world.
Posted by Jon in Albany at 12:34 AM No comments:

I saw this video today over at Ruhlman's blog. It is a Grant Achatz describing the origins of a dish. I just love the way chef's think. Very impressive. There are a bunch of other videos featuring Chef Achatz and his restaurants over on youtube.

This month's Charcutepalooza challenge is smoke. The suggested projects are hot smoking salmon, making Canadian bacon, a spiced pork loin or tasso. Well, I hadn't seen any salmon that looked good lately although I saw some wild salmon that looked pretty good at the Fresh Market yesterday. I've made Canadian bacon and while the spiced loin and tasso look good, I think they would be a hard sell to the family and I'd end up eating it all. I had some beef I wanted to use before getting fresh beef next month so I went with a smoked kielbasa and some summer sausage - both ripped from the Charcuterie cookbook.

I started Sunday after everyone went to bed. Not my best move since this ended up taking a little longer than I had anticipated. The summer sausage cures for a few days. I prepped that first. You've got beef from a top round roast on the left. The pinkish powder is pink salt, dextrose, and salt. The yellowish powder is Coleman's dry mustard and dry milk (the recipe calls for "Fermento" but I'm not in Buffalo right now so that wasn't handy). The seasonings in the little green cup are coriander, granulated garlic. Then on the right is some left over pork belly from the bacon project and pork fat. 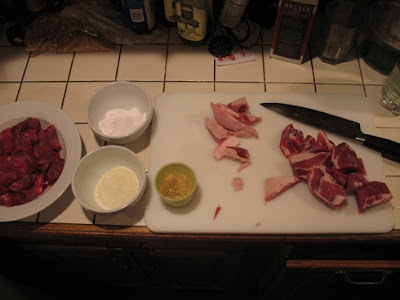 The meat got a coarse grind: 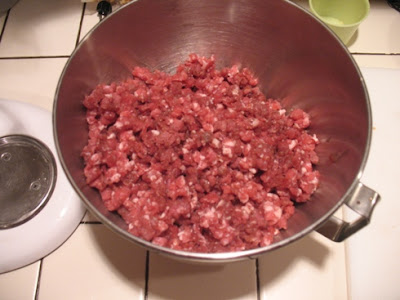 Then the spices got mixed in, the fat was diced and mixed in and it all went to the fridge. See you on Tuesday, Summer Sausage. 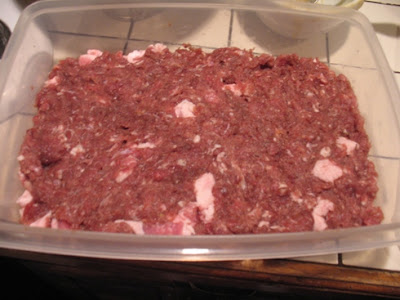 In kind of a stupid move, I cleaned up and moved onto the kielbasa. I have made the fresh kielbasa in the book before (it's really good). In this recipe, the meat is closer to being emulsified before stuffing. The other great thing about this recipe is that it call for some chipped ice. That means I get to break out the Magic Hostess and I love the Magic Hostess. My parents have been married for 51 years. They got this as a wedding gift. 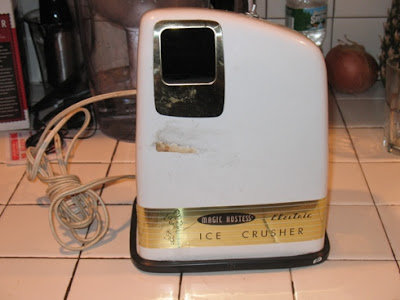 I should mention that you need to keep everything cold while doing this. Most of the meat still had a partial freeze while being ground so I didn't always use the recommended ice bath. Beef and pork fat back were coarsely ground onto a cookie sheet and then put back into the freezer while the spices were weighed and the ice was crushed. 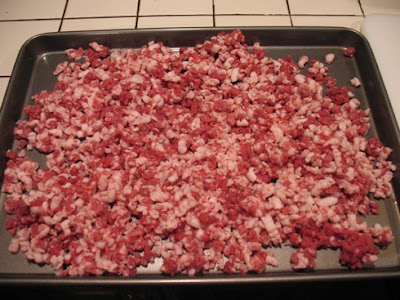 When you first turn on the Magic Hostess, there is a little whir. The grows and the there is a hum. Once it is done humming, it settle into a low sounding wubba wubbba wubba. It is then ready for ice. Ice goes in the trap door up top... 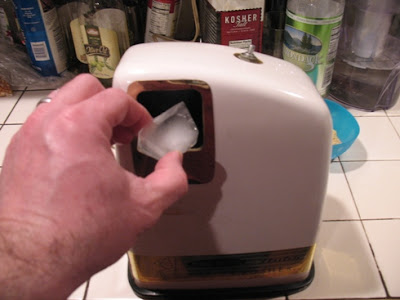 A mild wood chipper noise is made and crushed ice comes out in a little tray at the bottom. So cool. 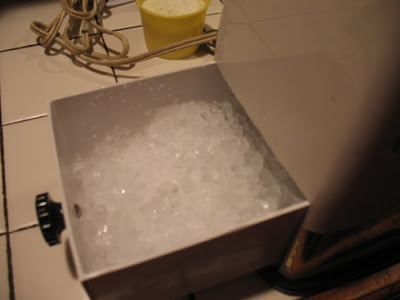 The crushed ice, salt, pink salt and dextrose get mixed with the coarsely ground meat before going through the fine grind. 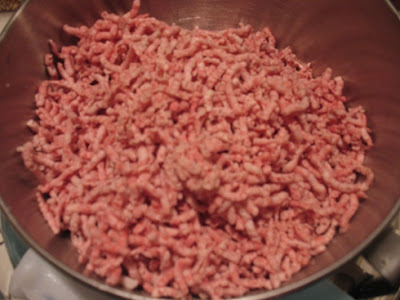 It gets stuffed into hog casings, tied up, and refrigerated on a rack to dry over night. 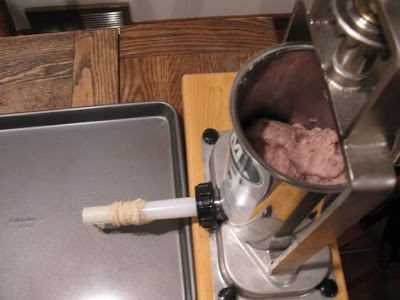 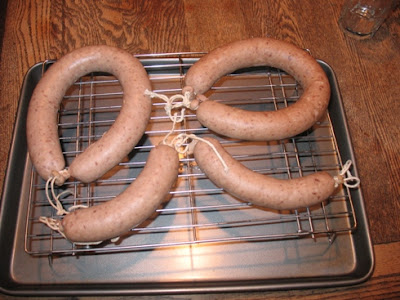 By the time this was all done, it was 1 AM. I had a beer on the couch and Anchorman was on TV. There are some really funny parts to that movie. Crashed around 1:30. I had a meeting on Monday night, but I left early to watch the basketball game. Just before tip off, I lit my new smoking toy and hung the kielbasa on this old skewer I have (also a hand me down from my parents). The new smoking toy is basically a square with a winding path through it. You fill it with sawdust and lit it with a tea candle. Once it start smoldering, you remove the tea candle and you have relatively cold smoke. Filled, this thing can allegedly last for 10 hours. I just filled it to where some photos online said the ashes were after 2 hours. I don't have a very good method of controlled hot smoking yet. The plan was to cold smoke for 2 hours and then put the kielbasa in a low oven to cook. Worked pretty well. Here's the gadget. 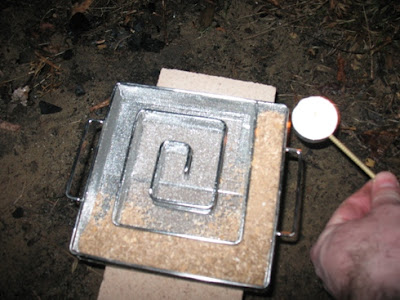 And here it is after 2 hours. 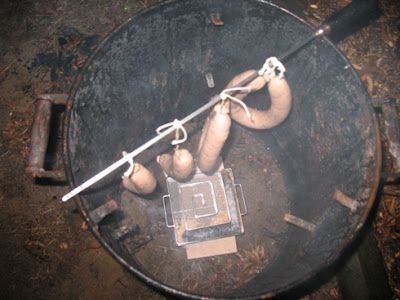 Then I put the kielbasa in a 180 degree oven to finish cooking. 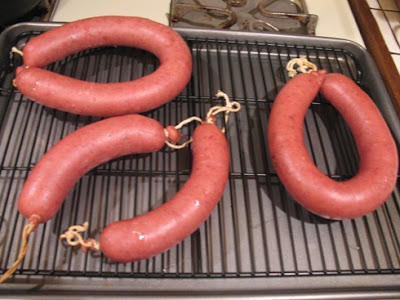 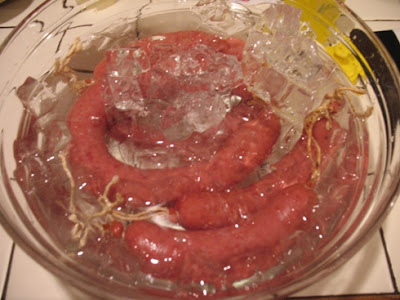 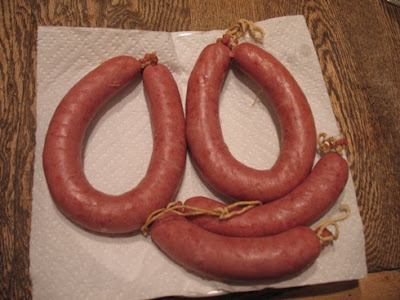 These are going to get grilled this weekend. Between cooking these and talking on the phone with my brother about being National Champs, it was another late night. Onto Tuesday. I had originally thought about stuffing and cooking the summer sausage in one night. That was just silly. The plan quickly changed to grinding and stuffing on Tuesday, smoking on Wednesday. Here's the meat after two days in the fridge. 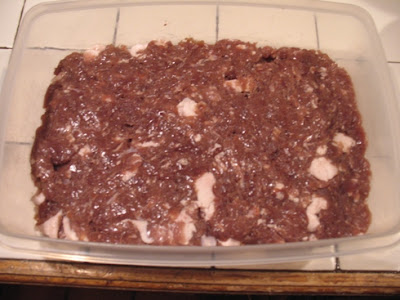 This goes through the fine plate of the grinder. 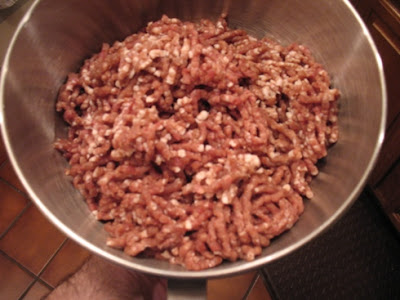 Insert your own casing/condom joke here: 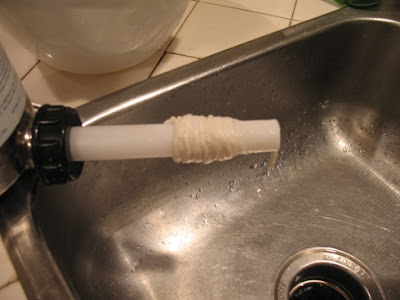 Not sure if it was me or the sausage stuffer, but these was not as easy as it usually is. Casings broke a few times and the handle was sticking. Everything seems to be working again but I was glad I wasn't staying up even later to smoke these on Tuesday. 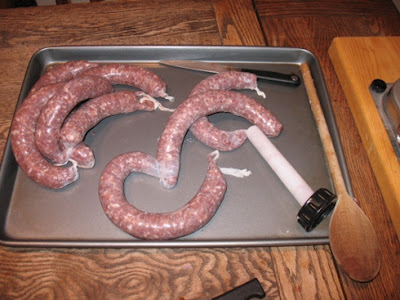 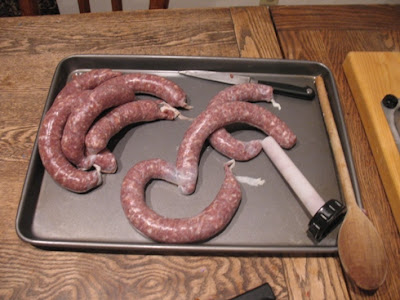 Once again, it was time for sausage in bondage. I had an old Family Guy on in the background to help pass the time. I really need to learn how to tie a knot. 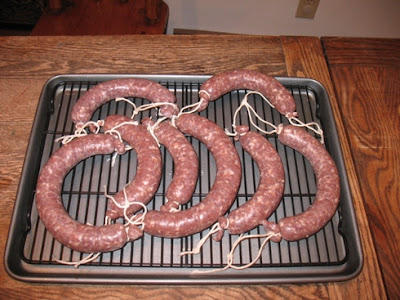 I finally smartened up and started the smoking when I came home from work. The 2 hour smoke started at 5:00 tonight instead of after dark. I used up the rest of my saw dust sample. I have to order some more. This saw dust is much finer that what I have been able to find locally. 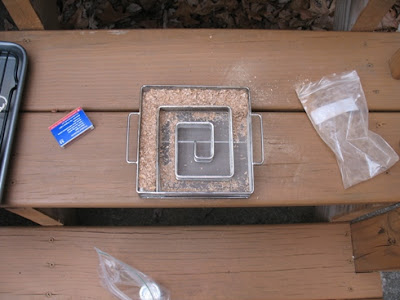 Had to use two skewers this time around. 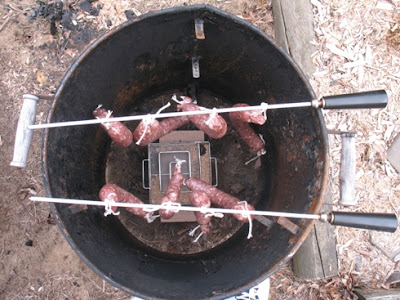 After a few hours of smoke, these went into a low oven too. And here they are coming to room temp. 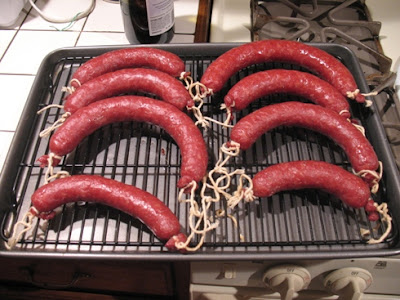 Not sure if I am done smoking stuff for this month's challenge. I'll have to see what kind of time I have this weekend. I am also thinking about curing and smoking the Easter ham. That will be after the 15th deadline though. Got my Charcutepalooza homework and taxes done before the 15th. What were the odds on that?
Posted by Jon in Albany at 11:02 PM 1 comment:

Tonight, the men's basjetball team is playing for the national title. The women face off tomorrow. If they both win, it will be the second time that a school has won both tournaments. UCONN has done it once before. I have a meeting to go to but plan to be home for the game. The plan is for my first of this month's Charcutepalooza projects of the month to be cold smoking during the game.


Update: Since I wrote this, the double isn't happening. Still a shot for men's team.
Posted by Jon in Albany at 6:10 PM No comments: