Every winter, we have a Summer in February party where we make a lot of summer/picnic style food and eat too much. Deviled eggs, potato salad, 7 layer dip…the works. The small family winter festival also goes by the name Rib and Pierogi Day. If ever there was a weekend to pretend it was summer, this Presidents Day weekend was it.

The low temperature at my in-law’s house Saturday night was -18. I watched the temperature rise pretty quickly Sunday morning and knew I’d be OK working the BBQ pit. I think it was pushing 8 degrees when I got going. And getting the pit going became much easier when we started filling the pit with coals taken from the wood stove in the garage.  Little side note in case you want to do this yourself: in the summer the coals can go directly on the ground. In the winter, the frozen ground thaws and then puts out the coals. In winter, I have this old cast Iron grate that keeps the coals off the ground. Around 11, armed with a pit full of coals and a burn going for future coals, the ribs went in. 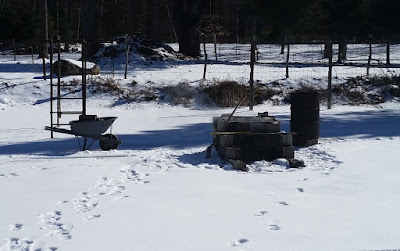 Around 2, I moved the ribs to the side and some sausage went in. At 3, everything got wrapped in foil and went for a rest in a cooler. Also at about 3, Aunt Carol began to work her magic frying up a lot of pierogi. 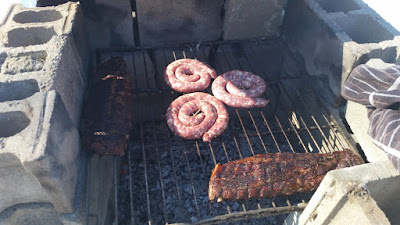 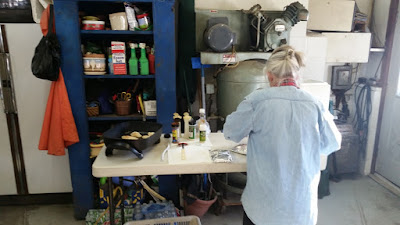 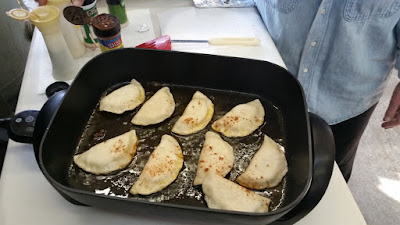 A little after 4, we ate, and ate. Here’s a rack of ribs and half (that’s right half) of the pierogi. 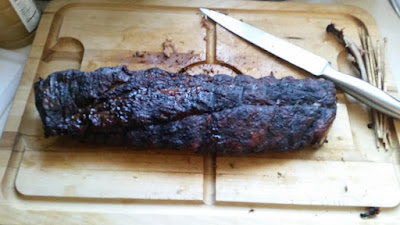 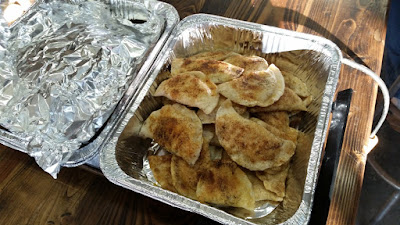 It was a good time. This year it wasn’t as desperately needed as in past years, but a Summer in February party really does help to break up the winter.
Posted by Jon in Albany at 7:15 PM No comments:


The All over Albany crew left Stuyvesant Plaza and headed over to Restaurant Navona on New Scotland. Navona isn’t strictly a pizza place like Blaze. It’s a restaurant that also has wood fired pizza. The restaurant is really nice and this could definitely be a nice neighborhood restaurant. So far, I’ve only had the pizza so I can’t speak to the rest of the menu, but many of the menu items have at least one element influenced by the wood fired oven.

My pictures came out pretty bad.  For much nicer views of the pizza, check out the All over Albany write up here.

On to the pizza: the Navona pizza looks to be heavily influenced by the Neapolitan style although I don’t believe they adhere strictly to the Neapolitan rules and regulations. Certainly not a problem because many of the rules seem to be rules for the sake of having rules and the VPN organization often seems to be more about money than pizza. The wood fired oven is from Mugnaini, a well known specialist in commercial/residential ovens and still had a front landing to be installed. Due to some delays, the oven had only been installed for about a month at the time of our visit.

We sat at the corner of the bar as the restaurant was gearing up for a busy Saturday night. The first pie I tasted was the Cheese Puddle with mozzarella, provolone, ricotta, roasted garlic and olive oil.  I liked the flavor of the dough but there was a little too much char around the outside of the bottom. I thought the cheese had combined and had a beautiful, almost brie flavor. I enjoyed the pie. Not sure this would be a topping combination I’d seek out again, but I certainly wouldn’t turn down a slice if you were offering. The second pie I sampled was the Valentina – Pecorino Bianco, ham, egg and black pepper. This pie has less char and very pretty leoparding. When egg yolk was broken, the yolk ran and added richness to the pie. I really liked the flavor combination.  Excellent pizza. I’d steal this topping but one improvement I’d suggest is to cook the egg directly on the pizza instead of in a pan. A nice presentation might be to slice the pie table side so the diners can dig in quickly after the yolk starts to run. 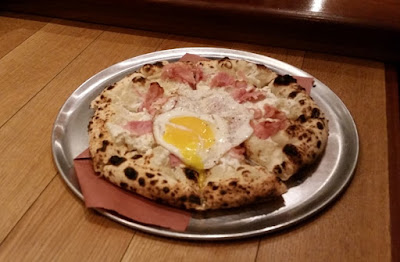 Pizza number 3 was the Navona which is essentially a Margherita. In speaking with Jay of OG Woodfired in Buffalo, he told me that what he loves the most about a Margherita is the simplicity. There is nowhere to hide. If anything is off, you know. This pie had a little bit of a gum line. The bottom of my slice was a little too charred – it’s a difficult line to walk, some char is delicious, too much is burnt. Even thought my pictures stink, you can see a big difference in char compared to the Valentina. I liked the sauce. It tasted like good tomatoes and salt, as it should be. The cheese and basil were good too. I would try this one again and I bet it is better in a month with more dough and oven experience. 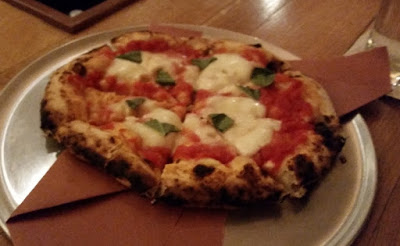 The final pizza was Fire Roasted Eggplant with tomato jam, roasted fennel R&G goat cheese and house harissa. There was a gum line again. I think there is a little bit of an oven/dough learning curve that will improve the pizza as time passes and experience is gained. I liked the flavors on this pie but I doubt I’d go pick it again with the other options available.This is the worst picture I took that day, either the camera didn't focus or I had a minor seizure. 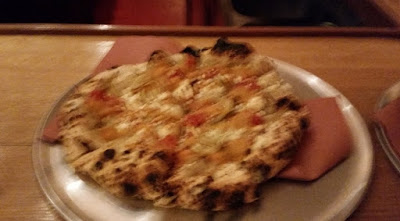 After the tasting we had a conversation with the chef. He clearly is passionate about the food he serves his guests. During this conversation, I felt like I put my foot in my mouth (for the 2nd time of the day) talking about the oven. The first time was at Blaze when I made a comment about the artichoke pizza before Deanna tried it. Kind of a judging faux pas. We were talking about the oven construction and the chef was describing the 9 inch concrete slab below the oven floor. I’m not sure if I made a confused face or what, it’s kind of a blur, but I said something like, “and insulation, right?” Nope. No insulation under that floor. From everything I’ve read on ovens, that’s a huge error. But I am unfamiliar with this particular oven, maybe an insulating layer is built into the floor. Or maybe it isn’t as big a deal for an oven that is fired daily. I don’t know. I can say with the oven I am planning, the oven floor with have a minimum of 2 inches of ceramic fiber insulation. I'm leaning towards 4 inches of insulation depending on how tall the oven stand ends up being. But that heat balance and the conductivity of the floor is very important for an even bake.

I think the pizza dough could actually use a little more salt. I’m taking a wild guess here, but I’d say the baker’s percentage of salt is under 2% and raising it a little to 2.5%, maybe even up to 3% would add flavor to the dough.

Overall, I really like what’s going on here. It’s good pizza with the potential to get better. In fact, if the restaurant was open on Sundays, I would have brought the whole family for dinner on Super Bowl Sunday to give some more of the menu a try. And the Mister Bill pizza too - meatball with fennel salami, tomato and mozzarella.
Posted by Jon in Albany at 10:18 PM 7 comments:


Last week I picked up a dozen full sized and two half sized concrete blocks to mess around with the stand layout of the oven. If this is how winter is going to be, I might as well get going. This weekend was perfect play with blocks outside weather. I had three options in mind. I laid out the first one, Option A, kind of a horseshoe pattern. The tape measure in the picture represents the size of a 2 foot log to be stored under the oven. 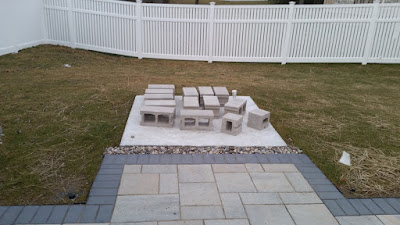 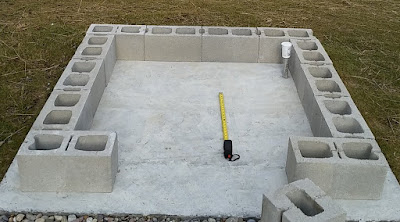 I thought this might be a good layout if I were going to use full sized bricks on the outside to cover up the blocks. There is just about the exact amount of space full sized bricks to sit the on the foundation slab. The wall also hugs the electrical conduit. The downside with Option A is there is a lot of wasted space in the back.

Option B takes up a bigger foot print but allows more access to the back. Because the walls are close to the edge of the foundation slab, the blocks would have to be covered with a veneer, which isn’t necessarily a bad thing. The electrical inlet might need a little protection but that should be easy enough to handle. Also, this set up is wider and I think forming up the slab the oven will rest on will be easier since it will be flush with the sides of the stand. 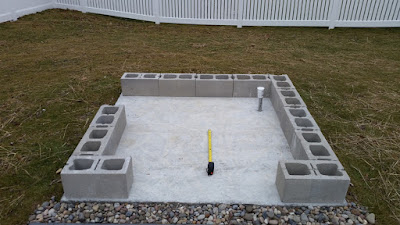 Option B1 is similar basically Option B but with the smaller foot print. 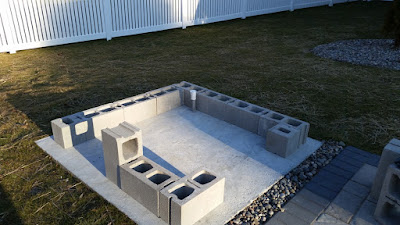 Option C is two “C” shapes of the left and right sides of the foundation slab – open in the front and back. I didn’t even set it up. After looking at Options A and B, I knew I didn’t want a straight flow of air under the oven. Wind mostly comes from the fence side of the pad. I could have added a wall in the middle, but that messed up the space for a two foot log.

Option B wins and it is kind of a relief to be able to focus on one layout now. When I was done, I stacked some blocks to look and the actual height of where the oven floor will be – 50 to 52 inches high. I’ve got to tell you, actually looking at the blocks is very different that looking at a scaled drawing. I was getting nervous at having to build the dome at that height. I’ll need to be on something, maybe a mini scaffold or bunch of small step ladders. To try and shake the nerves off, I broke out the arch I built out of wood a few months. It’s not centered and one of the glued joints is starting to fall apart. But that 2x4 is at the right height to represent the floor and the arch is a cross-section of the oven. 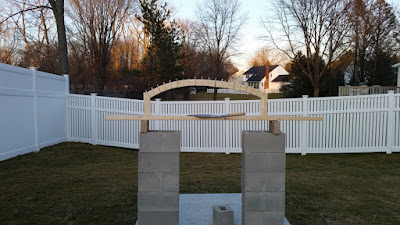 That view made me smile (even though one of my badly glued arch joins is failing) and brought me back to the task at hand. I found a supplier for the firebricks I want to use - Duke Concrete in Queensbury. It's a little bit of a haul but they are the only local supplier of Whitacre Greer low duty firebrick. All my research says that's the way to go, at least for the floor. Next step is finding the right used wet saw. I almost pulled the trigger on one, but I chickened out. And more planning. And reading. Lots of planning and reading.
Posted by Jon in Albany at 6:30 PM 2 comments: