"The Art of the Matter" The seamsters union try to make the grade as pupils when they join forces with art students to create artwork that will lend inspiration to garments.

Normally, I wouldn't write about Project Runway. Or really even consider watching it. I gave it a try last week weeks ago to get a little background for this Thursday's episode and couldn't sit through 10 minutes of it. So why would I recommend this Thursday's episode? My cousin's step daughter will be one of the young artists working with a designer. Her name is AJ. I have no idea what she has done on the show, but I'm pretty confident you'll be impressed by her. I can't say the same for the designers participating in the contest. But watch out for AJ. She'll be taking over the world in 10 to 15 years.


UPDATE: AJ was on the show for all of 11 seconds. The designer she was teamed with fell somewhere in the middle of the pack. As for the rest of the show...Project Runway, you're out.
Posted by Jon in Albany at 10:21 PM No comments:

Spent last week in New Hampshire. We shared a house with three other families. I went to high school with the father in each family. This is the squalor I had to live in for a week. 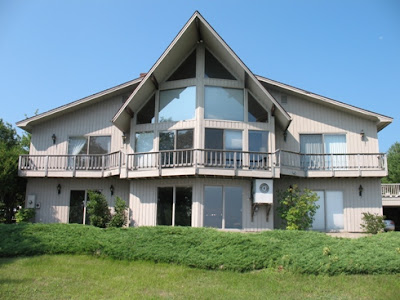 Somehow, we managed. Here's the view from the deck. It was a littl foggy this particular morning. The view is better than the picture. 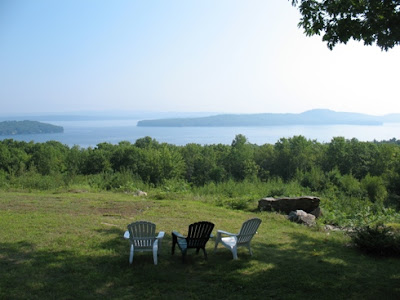 On the ride out to Lake Winnipesaukee, there was no good time to stop for lunch since the kids were taking turns sleeping. By about 1:45, everyone was getting hungry, but the signs on the highway were not very helpful. We had to get off I-89 in a few more miles and decided we'd stop at the first place we saw.
That place turned out to be The Flying Goose Brew Pub. We got a table, the wife and I started looking over the menu and the kids got busy coloring on their place mats. Off to my left I heard a voice say, "Jon and Amy?!?!" It was Jeanie and her kids. Jeanie was in our dorm freshman year at Northeastern. They were also heading to Lake Winnipesaukee for the week. Holy Small World, Batman! We exchanged cell phone numbers and managed to get together on the following Friday.  Made for a very nice day.
The kids loved the trip. I think the adults had a pretty good time too. Here's the group photo of the vacation house taken just before heading home. 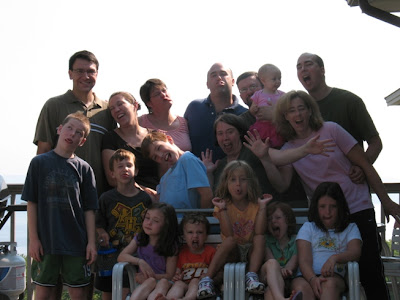 Going to get this one in a little early. We leave for a week in New Hampshire tomorrow. Been a little crazy around here but I managed some time to get this made. The project is country style pate (I don't know how to get the proper accents in type). I had always wanted to make my own for Thanksgiving and this was a good opportunity to give it a whirl before showday.

Made a stop at Dean's Whole Foods on Central to get the spices. Their bulk spices rule. Fresh Market only had veal liver but I was able to find some pork liver at the Asian Market on Central. Grabbed some pork at Roma's and picked up a itty bitty bottle of cognac at Newton Wines. The rest of the ingredients were pretty basic. And away we went...

Made a batch of the Charcuterie Pate Spice. It smelled pretty good which surprised me a little since it has cloves in it and I don't really like cloves. 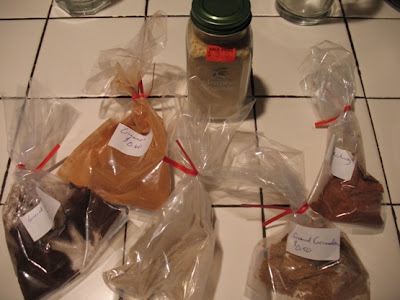 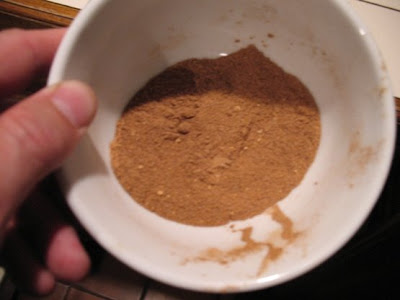 I started weighing out the ingredients. Isn't that the cutest bottle of cognac? 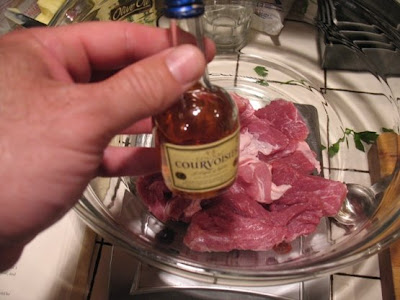 Got the panade ingredients together... 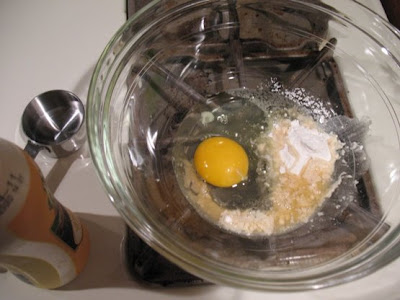 Little bowl of spices. I bought these little bowls the one time I was in an Ikea. The kids still use them, but once they are in bed, the bowls work great for mis-en-place. 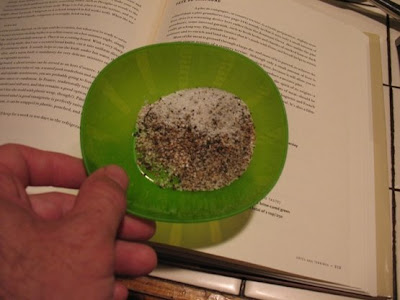 You run the pork through the coarse grinder with the coarse disk. Then combine onions, parsley, the spices and the liver with about a third of the ground pork and push that through the finer grinder disk. I was well on my way to making to truly spectacular mess in the kitchen. 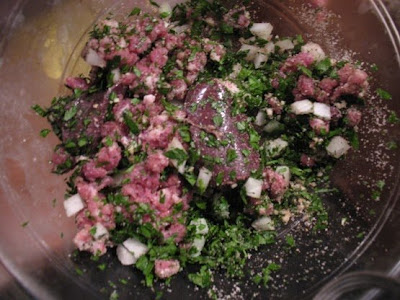 Everything goes into the bowl and gets whipped up with the paddle attachment. 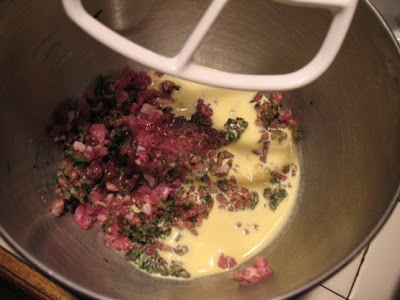 Then, I put the mixture into two small loaf pans. Pressed it all in. Put it in a water bath and off to a 300 degree oven. After about 40 minutes, I got a temperature reading on 150. I put the loaf pans on a rack and weighted the pate down with small pieces of scrap steel. Once the pate was at room temperature, I moved the pate to a fridge and added two cans of soda for additional weight. 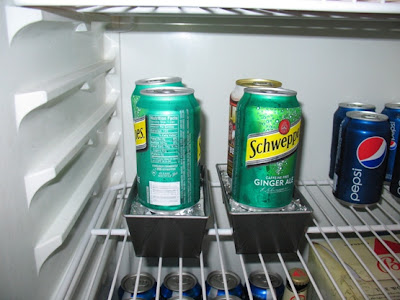 The next day, I had a baguette and small yet over priced cornichons  ready to go. I cut into the pate and.... 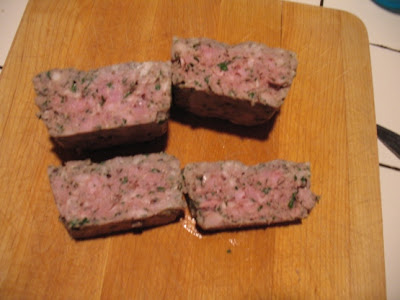 failure. This is the second loaf, the first one actually looked better but I didn't take a picture. It was a little pinker than I thought it would be in the middle. Kind of medium rare. And the cooked outer portion was pretty unattractive. But I knew I had seen a internal temperature of 150 degrees, with carryover heat it should have gone a little higher and that is a safe temperature to eat pork. So I had a taste. I did say failure, didn't I? Not good. Having already disliked the appearance, I was able to add disliking the texture and taste to the list. It was inedible, it just wasn't good. Never even opened that overprice bottle of cornichons.

If this wasn't part of a yearlong project, I doubt this post would exist. Plenty could have gone wrong - I made half a recipe. I used small loaf pans. Keeping everything so cold and going directly into the oven could be the cause of the nasty gray exterior. I was a little rushed, could have screwed something up too. The real problem is that I didn't like the flavor combinations.Someday, I'll try again...If you ever find yourself in Zabar's, their pate is significantly better than this. At least it was about 10 years.
Posted by Jon in Albany at 11:10 PM No comments: