Anyone remember that MadTV sketch about the video dating company "Lowered Expectations?"

Actually, anyone still here? It's been a few months.

I happened to be in the area of a recently opened pizza chain and with I figured if I go in with low expectations, I can't really be disappointed. And for the most part I was right.

The chain is Uncle Maddio's Pizza. Until they started to set up shop in the area, I had never heard of them. Where Blaze has been called "The Subway of pizza" meaning you follow you pizza up a line customizing it as you go, I would say this is more like "The Panera of pizza." There's a person taking your order and money, you get a number, and fairly quickly your order is ready. I suppose you could follow your pizza to the oven like Blaze. No one did while I was there.

I chose two pizzas. A plain cheese and The Big Max which is sauce, cheese, pepperoni, bacon, sausage and meatball. Also now that I'm typing it, The Big Max sounds like it is trying to be a play on The Big Mac, but maybe not. At Uncle Maddio's the pizza is hand stretched - but it was more like pulling than the over-the-knuckle dough stretching, an put on a screen. From there it gets topped. Once topped it goes into an air impingement/conveyor belt oven. From my angle it was hard to time a bake. There are a bunch of similar looking pizzas, mostly the same size, all being moved along a conveyor belt. So I was confused if the pizza coming out of the oven was actually the pizza I started timing. I'm going to guess the bake was in the six minute range. They also had bags of All Trumps (a very common pizza shop flour) and when they were opening a bag of shredded cheese I couldn't see any labels so maybe it is their own shredded cheese. 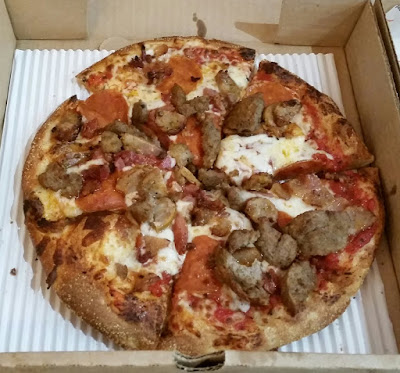 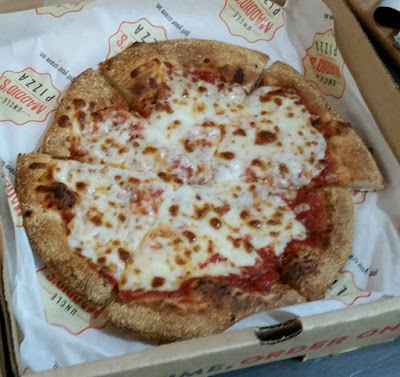 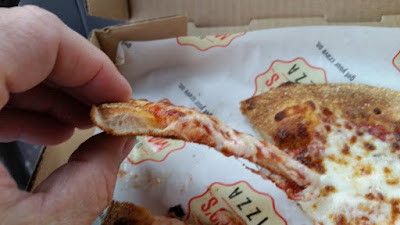 Profile of the cheese 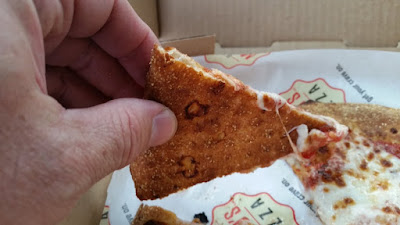 Bottom of the cheese

It tastes like chain pizza. Sauce is a little sweet. Bit oily. A lot of salt. Not much flavor in the dough. Not a fan of their meatball. Staff was very friendly and I was given some swag: two beer bottle coolie things, a deck of card and a Stella Artois cutting board that kind of looks like a paddle used to spank Kevin Bacon in Animal House.

When I see all these chains serving mediocre at best pizza, I feel bad for the generation of kids that are going to think it's good. This is what is served at their birthday parties. When their team has and end of season party, that's the pizza they are eating at the celebration. When I went on that pizza tour with people from the forum, the first stop was a place called Mama's Too. If you have Instagram, follow them because the squares they put out are just beautiful. Within a 5 minute walk of Mama's, there's a Domino's. Papa John's is a 4 minute walk. Unless price for quantity is an issue ($20 will go farther in a chain), I can't imagine picking the chain over Mama's Too. But I'm sure people do. A lot of people really like chain pizza. On the pizza forum, the most viewed thread is the Papa John's clone. So if you like Domino's and Papa John's, I'd say there's a good chance you'll like this.

I'm firing up the oven next weekend for a birthday party. Rain or shine. Don't care, although I'd prefer shine. There will be more pizza.  Looking forward to it.
Posted by Jon in Albany at 11:25 PM 8 comments: