I can’t believe my family routinely lets me do this to them. This weekend we were heading to Staten Island for my nephew’s birthday party. Why not extend the trip a little, spend Saturday night in a hotel and eat a lot of pizza on the way? And let’s bring the dog too. 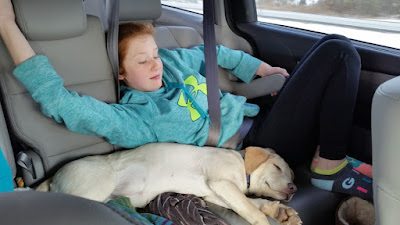 First, some background on the behind the scenes thinking of the very secretive Pizza Tour Site Selection Committee (PTSSC). Several very influential members of the PTSSC follow Pete Genovese on twitter. I’m not sure what makes his him an authority on all things New Jersey, but he seems to be the guy. He travels the state in search of the best diners, best bakeries and, of course, best pizza. He does a New Jersey Pizzeria Power Rankings which is a top 25 list. I think it is annual thing. There were several newcomers to the list that shuffled places around in 2016. Sources familiar with the recent meeting of the PTSSC tell me the committee wanted to see how Pete Genovese’s thoughts on pizza lined up with their own. The PTSSC finds it interesting to try a place a pizza critic has visited. The process kind of calibrates one’s tastes with the critic’s tastes. For example, if you find a movie reviewer with similar tastes that writer’s reviews should hold a little more weight than a reviewer who panned your favorite movie. All three places on this trip routinely make Peter Genovese’s Top 25 pizza places in New Jersey. The PTSCC also paid attention to location, travel time between pizzerias and total travel time.

I have been here before and should I ever find myself within 20 miles of the place, will come again. When I think traditional NY Slice joint pizza, it’s this slice. It’s crisp yet tender. I have no idea how they do that. Here’s what we got: a slice, a deep-fried calzone filled with ricotta and ham and a bag of zeppole. 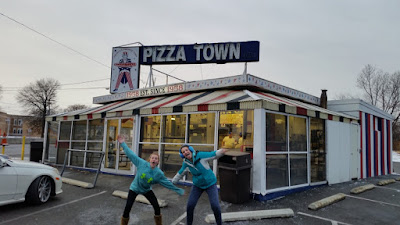 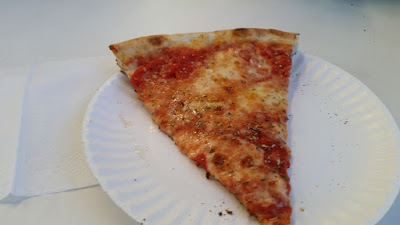 Look at the beauty of that slice 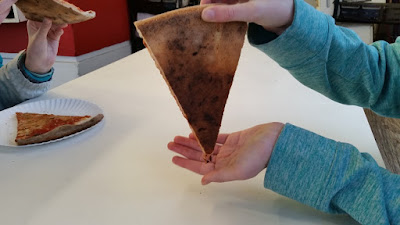 Seriously, look at it. 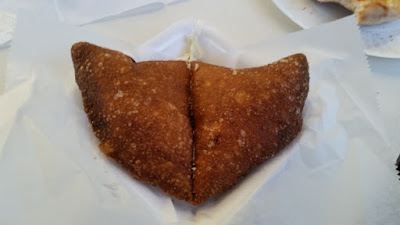 The small deep fried calzone is fantastic. The dipping sauce is good too. 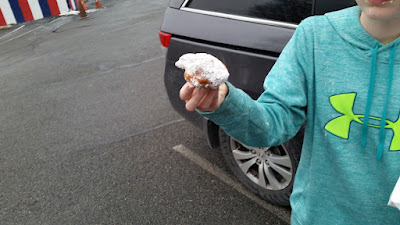 After this trip, everyone wants me to start making zeppole.

The kids loved everything about this place. Pizza was great. Calzone was great. Zeppole were great. My youngest wants to move closer. She once said, “All you need to survive is a Target and Bella Napoli (for their doughnuts).” She would be willing to forgo the Bella Napoli doughnuts for these zeppole. Plus, while we were there, I heard a thickly accented bee-you-tee-full. Plus-plus, this is the site of one of my favorite dough stretching videos (this is poetry in motion). Plus-plus-plus, I love this place. Pro tip: eat the zeppole outside so you won’t feel bad about powdered sugar going everywhere. If you’ve had a Bella Napoli powdered jelly doughnut, that is just a powdered sugar dusting compared to these zeppole.

Star Tavern is kind of the home of the Bar Pie. I have wanted to try this place for years. There is a very long thread about their pizza on the pizza forum. It’s very thin pizza that is meant to go well with beer. We got here around 4:30 on a Saturday. The parking lot was packed and there was a short wait for a table. When the pizza came to the table, the melted cheese was approximately the temperature of lava. 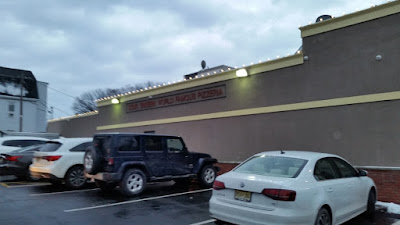 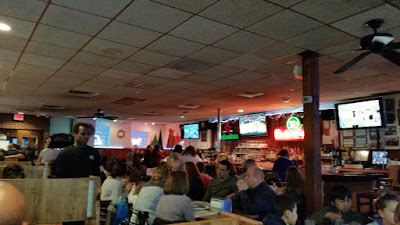 The joint was jumping at 4:30 on a Saturday. 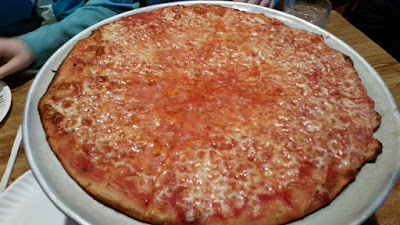 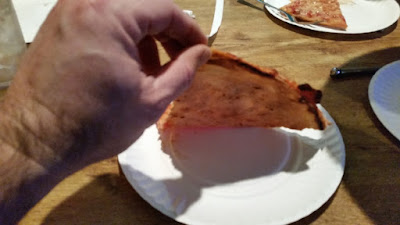 A peek at the bottom.

I am usually one that digs right in and takes a bite, roof of the mouth be damned. But not this time. Let’s give that a second to cool. The pizza was good. It was crazy thin. The texture of the crust reminded me of a better version of a Blaze pizza. The best bites were the crusty bits of melted cheese around the edges. This is the kind of place where the Pizza Cognition Theory is in full effect. The restaurant was full of families having dinner. The table next to us was two families going out together, with a total of 4 kids at the table, I’d guess the oldest was 10. When those kids come home after being away awhile, when they come home for a visit, Start Tavern is going to be the first place they want to go. Should this place ever change or (I don’t even want to say it) close, people will mourn it for a long time. A lot of people. All that said, it is a little too far away from my personal Pizza Cognition, so it isn’t for me, and there's nothing worng with that.

I was definitely looking forward to this stop. At one time this shop was at the top of Peter Genovese’s list. I think in the one of the more recent version it has dropped to Number2. On a busy Saturday night, this was a 2 person operation. It is take-out only. There’s a small place for customers to stand and at times while I was there, it was packed. Unfortunately, I’m not sure I got the best that Santillo’s has to offer. They have a variety of options to choose from, some of them are by year. I asked the person in front of me for their favorite. He was picking up three pizzas and seemed to have his own thermal bag to get them home. He recommended the 1964 but said everything is good. I took his advice. I spoke with a few customers and they all love this place. And I've got to tell you, if you are within a block of this place, it smells delicious. 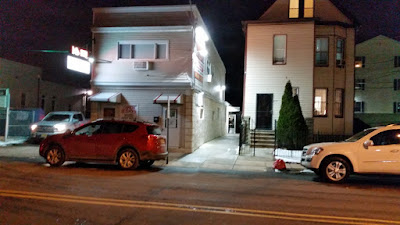 If you weren't looking for it, you'd miss it.  You need to go down the alley. 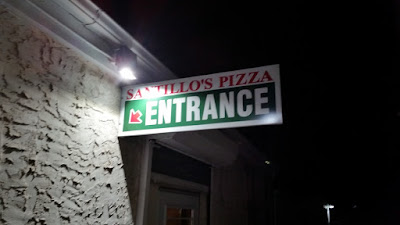 Near the end of the alley, this sign is over the door/ 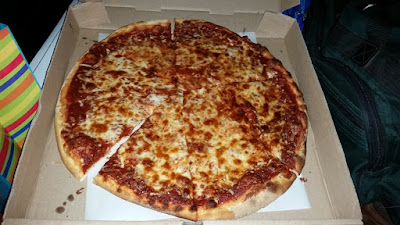 No tables, we ate this pizza out of the back of the mini van.

I thought the pizza was just OK. But again, I might not have picked the best of the best. I thought the sauce was a little too sweet and there was too much of it on the pizza. The crust was good but not amazing. If I lived closer, the menu would definitely require further exploration. All in all, OK, but I would have to disagree that this is the best pizza in New Jersey since it wasn’t the best pizza of the day. This certainly wasn’t bad pizza but I think I’d put the Gennaro’s tomato pie I had on an earlier New Jersey tour ahead of it.

After our last pizza stop we headed off to the hotel. The family consensus was that Pizza Town was the best of the day. It was fun tour and it left me feeling a little bit cocky. I felt like I could put my pizza next to a pizza some have argued is the best in New Jersey and I’d like mine more. I’m sure there’s a wee bit of bias in there. My last bake in the wood oven went well. Best one so far. I felt like I had the dough under control and could keep the oven floor temperature steady. Hopefully that wasn’t a fluke. This trip really made me want to fire the oven up again. Maybe on Saturday. We’ll have to see how the week goes.