I shouldn't have an opinion about this

If seven year's ago you asked me, "Jon, if you had to pick just one...would you go to a Sesame Street production or something put on by Disney?" I would have looked at you like like I had just found extra terrestial life and then tried to quickly come up with a smart ass reply.

Turns out I have a preference. The music, storys, costumes, sound, lighting and any other performace value you can think of are better at......wait for it...... Disney. We braved the remains of Friday's snow storm to go see Elmo at the Palace last night. While it was mostly empty due to the weather, it was also thouroughly under-whelming. When compared to similar shows put on by Disney that have come to the area (Toy Story 3 on Ice and some morning TV stage show for example), the Disney shows are actually impressive. There was one song/dance number that was impressive enough to make you wonder how they were physically doing that on stage. Elmo...not so much.

And while I handing out opinions I shouldn't have, Yo Gabba Gabba freaks me out.
Posted by Jon in Albany at 4:45 PM 2 comments:

Earlier today this month's assignment was handed out. This month were are working with brines. I've brined turkeys and pork tenderloins before with good results. On the docket this month: a brisket to be turned into corned beef or pastrami. I think I will also try beef tongue. Both will be from our cows. My brisket is a little on the small side, but I refuse to buy any beef. It will have to do. I took the tongues when we slaughtered the cows because they were going to get thrown out. Wanting as little as possible to go to waste, I froze them for a "one of these days" cooking project. I've never cooked it before. Don't even remember having eaten it before. Guess I've got a little reading to do... 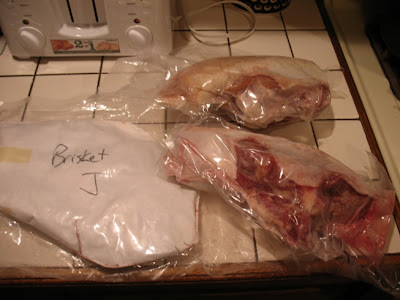 Bacon Explosion! 4 out of 5 cardiologists surveyed do not recommend this.

Way back in January of 2009, I read this article in the New York Times food section and knew that one day I would definitely make my own Bacon Explosion. What is a Bacon Explosion? On the outside, there is a bacon weave. Yes a bacon weave. Think lattice pie crust but bacon (a tutorial on how to make the nicest bacon weave I have ever seen is here). The weave is covering a mass of sausage. And pinwheeled inside this mass of sausage is some cooked bacon. This is the kind of meal that would be served in that Saturday Night Live sketch with the guys talking about "Da Bears" and drinking beer to work through their heart attacks.

Quick disclosure: My homemade bacon was not long enough to make the weave. I was bummed, but still moved forward. The cooked bacon on the inside is part of the Carcutepalooza project and I made the sausage. But the bacon for the weave was purchased.

First thing, make some sweet Italian sausage. My recipe is pretty straight forward -combine pork and fat, salt, pepper, and fennel. Grind. If you cut the pork into strips, the grinder grabs it and pulls it through by itself. 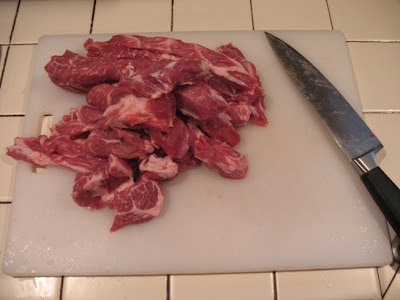 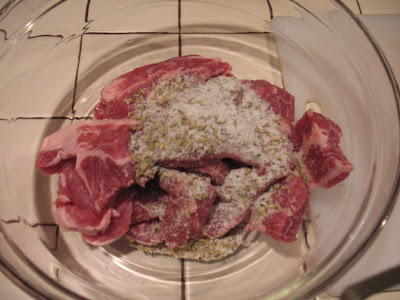 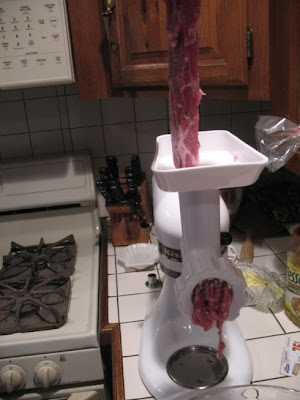 Then I fired up some homemade bacon. Couldn't resist a taste. It's good. 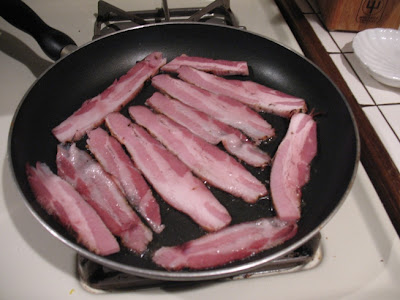 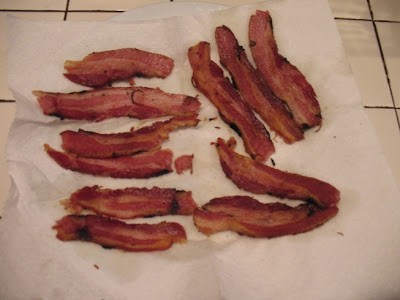 I made a weave out of the store bought bacon. As you can see, the pork belly I purchased to cure did not compare in size with what I picked up at the Fresh Market. I dusted the weave with some homemade rub. I left the salt out of the rub since there would be plenty in the bacon and the sausage. 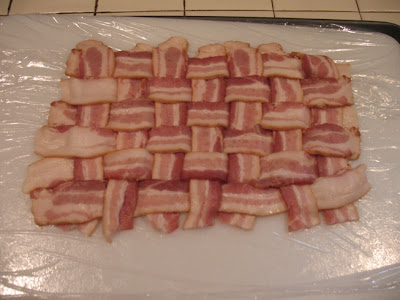 Laid out the sausage in a rectangle, dusted it with rub and topped with chopped fried bacon. Seriously, how bad could this taste? 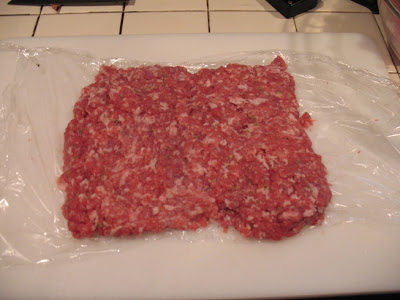 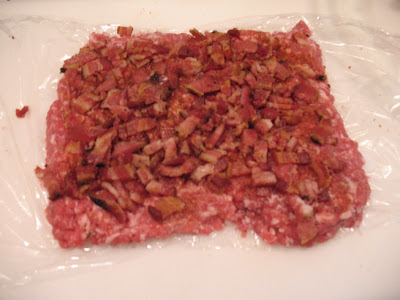 Time to make a log. I didn't end up going diagonally like Cowgirl. Maybe next time. I have never made anything like this so there was a little bit of a learning curve.I think I could have made the wave a little bigger and used less sausage. And the weave could have been tighter. In the bacon giddiness I was experiencing, I forgot to start the weave in the middle. Still, looking good though. 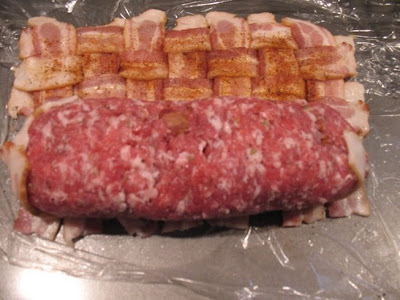 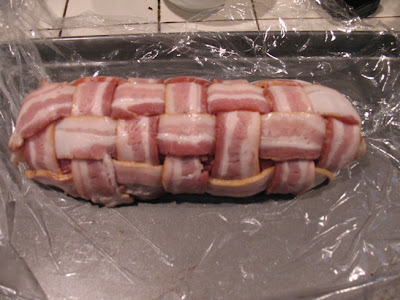 Dinner was going to be at my brother and sister-in-laws house. We fired up the Weber kettle with the coals on one side And set up a little foil baffle to cut down on the direct heat of the coals. 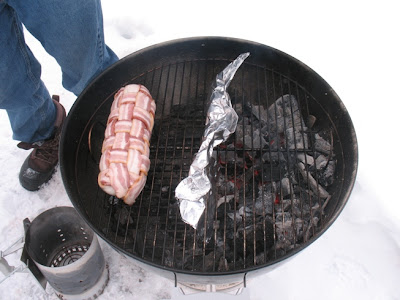 I flipped it wound twice and after about an hour and a half the inside temp was 160 degrees. I put the Explosion on a plate tented with foil to rest. 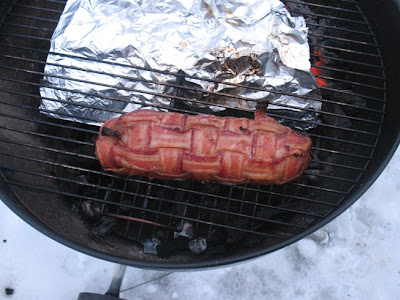 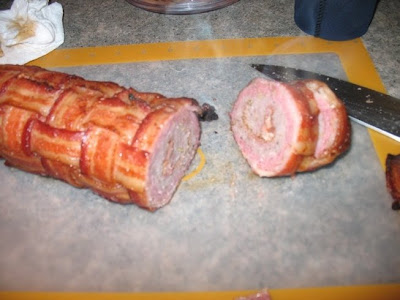 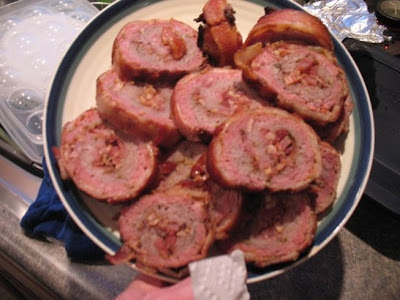 I thought it was pretty good. There was some room for improvement. Didn't get as much of a pinwheel effect as I wanted, but overall not a bad first effort. At times, I can be my own worst critic but a kid will always tell you like it is. My niece Abby has been a fan of my homemade sausage in the past. Tonight, she was at the kids table when she took her first bite. "Wow, the sausage is REALLY yummy! Allison (her cousin sitting next to her) have you tried the sausage?" Couldn't help to puff up with a little pride after overhearing that.

The pancetta is still drying out in the chamber. Probably will be done a few days ofter the 15th Chacutepalooza deadline, but it is on the way. Looks and smells good.
Posted by Jon in Albany at 12:04 AM 3 comments:

Not a typical Super Sunday here. Last night water started coming into the basement. Typically, we don't get water coming in under the living room floor. I'm not even sure how the water could get there. It is clearly leaking in from some sort of ice dam on the roof, but the path the water took to the basement is very confusing. Luckily, there is no visible damage inside the house. After a lot of roof shoveling (some by a contractor and a lot by us), the influx of water seems to have stopped.

Usually what I like to do is take the kids to a nicer than average restaurant for dinner. Gives them a good restaurant experience, but the restaurant is close to empty because everyone else is watching the Super Bowl. I had my eye on The Epicurian this year. Maybe a little too fancy but I checked out the website and they don't have Sunday hours. So then I was thinking Wine N Diner, but this year the Steelers are in the Super Bowl. Personally, means nothing to me. I don't get football and not getting it has really freed up a lot of Sundays over the years. My brother-in-law is a huge Steelers fan so the family went to a party he arranged. It was a very nice time and I ate way too much including a very unique and addicting kind of warm dip. It had shredded chicken, melted cheese and Frank's Red Hot. It was like cheesy buffalo wing on a chip. Strangely addicting. We left pretty early to get the kids home and to bed.

Between the shoveling and the party, there was no real time to make bacon. It looks like it is back to my nocturnal chicanery.

After spending a large part of the day shoveling snow off a roof, it was time to shovel something a little more fun. I thought I'd be able to get the smoker out, but that wasn't going to happen without breaking it. 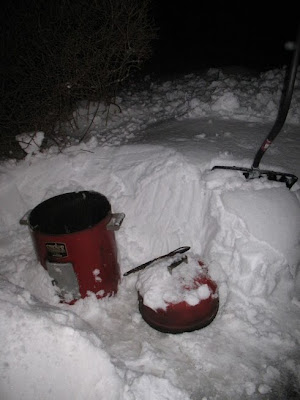 One slab of bacon, rinsed and air dried in the fridge for a day. 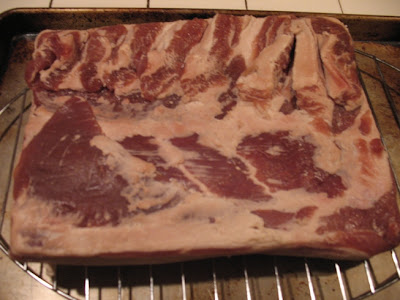 Got a chimney of charcoal going. 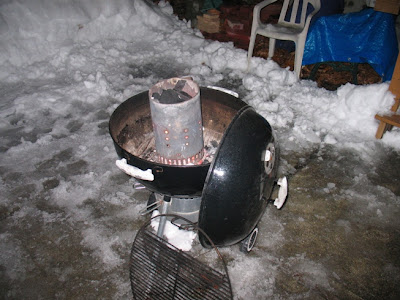 And this is what it looks like without a flash. 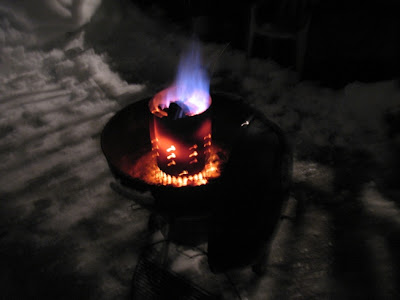 Dumped the charcoal into the smoker, put on two handfuls of apple chips, got the slab in there and wen inside. WE ignored the Super Bowl and watched something we had recorded. When the show was over, Here's what I had: 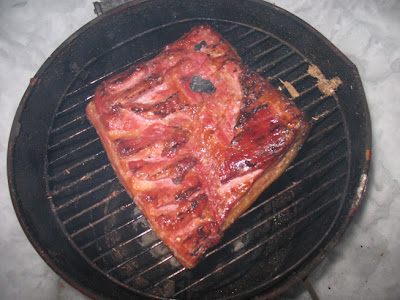 The pancetta is hanging in the makeshift chamber. The humidity is holding in the low 60s. I can't seem to increase it. I think I might have to move the chamber. There is a strange shaped closet under the stairs in the basement. I might end up refurbishing that in the near future. The space definitely has potential.

Here is the pancetta before a rinse. I gave it a dusting of black pepper before hanging it up to dry. It smells really good. I didn't roll the pancetta. I did once and it came out OK. I thought it was more work than necessary. Rolling the slab makes for a beautiful presentation, but I typically dice the pancetta so the presentation value is lost. 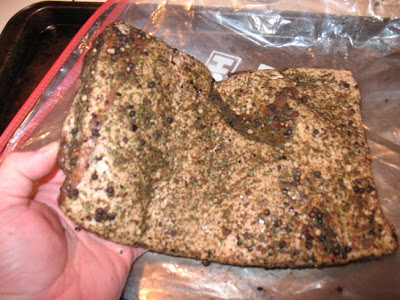 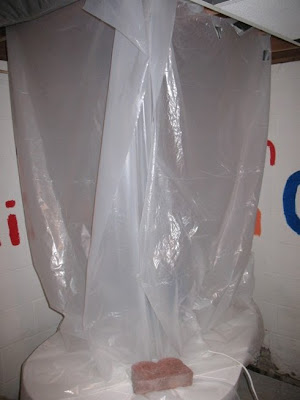 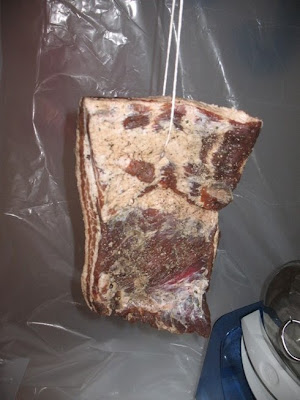