A Tale of Two Pizza Experiences

Another shout out to Mom. I think trying to provide her with a little something to read might breathe some life into this blog. No promises though.

I clearly have a problem with pizza and here are the tales of pizza experiences.

A bit in the past:
Back in February before the country shut down, we went to New York City for a show and then headed to Connecticut to visit my mother (hi mom). I don’t know when, but Colony Grill opened an outpost near her, so we headed over on a Friday night. I had never been and from what I had heard about it was that Colony Grill was one of the original places for a bar style pizza. They were also known for a hot chili oil.

The place was packed.

I mean mobbed. Busier than the New Haven Pepe's on a summer Saturday night. The waiting area was shoulder to shoulder and it was going to be 45 minutes to get a table for 5. Carryout boxes were constantly leaving the door. And bar pies are small so people were leaving with mini towers of pizza boxes. My expectations were getting higher. The crowd at this place was something out of the fantasies of most restaurant owner. Groups of 2, 4, 10 or more. Bar area jammed. Relatively fast table turnover. Plus, a good size crowd of people willing to wait for their chance to get seated at a table.

I hated the pizza. Really hated it. Like getting mad the longer you think about it kind of hate.

Here are some of the pictures I took. They have a very similar look to Start Tavern in Jersey, but Star Tavern is better than this. The photos look a lot better than the pizza tastes. 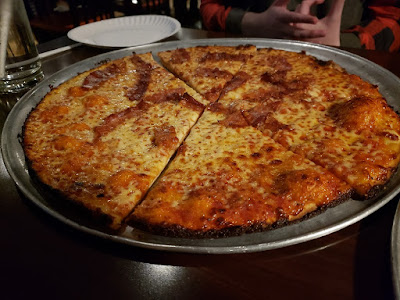 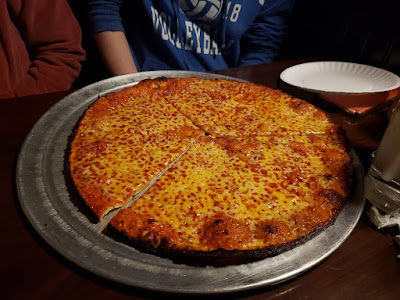 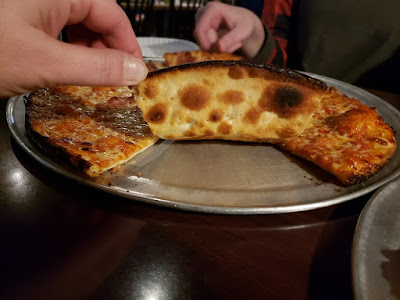 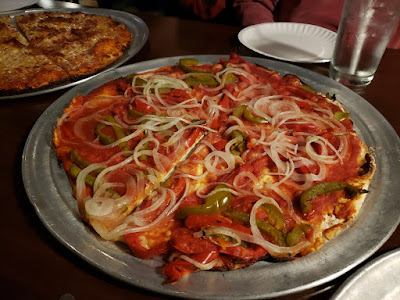 The dough was completely flavorless. It was like someone forgot to add the salt when the dough was being made. They have a salad pizza which is a lovey tossed salad on top of one of their pizzas with or without cheese. It would be better as just a salad. 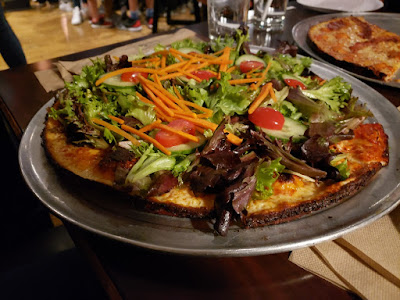 I can not believe the business this place is doing. This is a place that pizza nuts travel to try. It is straight up bad. And all those people leaving with carryout…the edible shelf like on the pizzas is less than 30 minutes. We took out leftovers home and they do not age well. I will give credit where credit is due. The hot chili oil is good, nice flavor and heat to it, but the oil would excel on a better pizza, 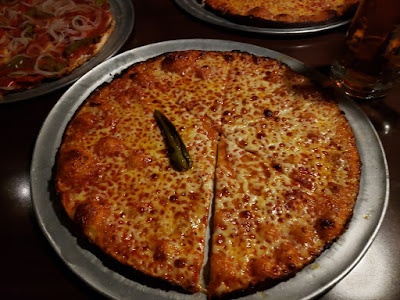 And they serve beer in those good mugs with the little nobby part for your thumb. I don't drink much beer but I like these mugs better than pint glasses. 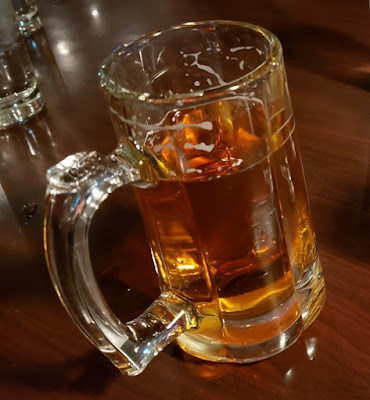 During a phone conversation with my mother I made a joke about getting some of their pizza to go. My mother said, “I think I’ll go back there never.” Pretty much sums it up. Five out of five of us are fine never returning...

A little closer to the present:
The pizza community is pretty cool. I'm definitely on the outside looking in but you can see how the shared pizzeria experience between people working in the field forge great friendships. I originally joined Instagram to keep tabs on my kids’ accounts. I quickly found there is a pretty large pizza presence. And like any other social media thing, once you find one there are more recommendations and then you find a few people from the pizza forum and it just keeps snowballing to include pizza makers in Italy and around the world. Plus, pizza people are some of the greatest people in general.

One of the people I followed when I signed up was Scott's Pizza Tours. Scott Wiener is by every account a guy with an incredible knowledge of pizza history and the Guinness World Record for most pizza boxes. From following Scott, I was introduced to The Za’Report (Miriam) who is one of the guides for Scott’s Pizza Tours. Since the quarantine started, Miriam has been making pizzas at home for first responders, out of work people and pretty much anyone wanting a pizza. She also does live pizza making things in her apartment in Brooklyn. They are entertaining to watch and they regularly coincide with when I am making dinner. So I prop the phone up and listen to her make pizza while I cook. It has been nice. She also occasionally does “bedtime stories” where she talks about something pizza related. The history of Queen Margherita and the origins of the Margherita pizza was great. Making a long story longer….

Miriam recently started working at the original Paulie Gee’s location in Greenpoint. A pizza maker that trained her there Chris, aka trunkbeer on Instagram, is currently in Albany for the quarantine. Miriam told me he was looking for some supplies (the Jon in Albany handle game me away) so I reached out to Chris to point him towards a few local places he could try.

Well, Chris now has a Ooni or Rockbox, not sure which, and a very pretty spiral mixer (I definitely have mixer envy).and when the mood hits, he has contactless pizza pick up in from of his house. The first few times I was too late to get a pizza. The available pies can go pretty quick. My time slot was 12:30 on Thursday. Now this is exciting, right. You’ve got a professional pizza maker personally making you a pizza at a designated time. 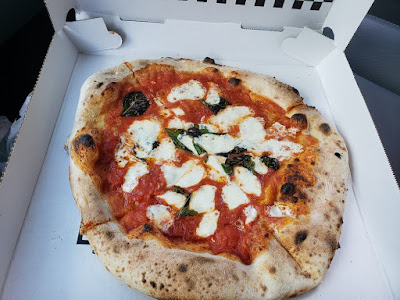 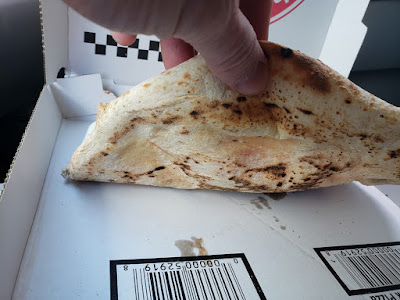 It was nice to meet Chris, even though we were both wearing masks. It was also nice to inhale some fresh pizza. The basil smelled so good. The pizza, already good, is going to get better as Chris continues to dial in the mixer and oven.  He’s started another Instagram account called trunkpizza. I'm guessing future pizza sign ups go through that account. Give both a follow if you want to try one of the Chris’ pizzas. You’ve got a little time. He’s taking this week off.

Posted by Jon in Albany at 5:32 PM No comments: 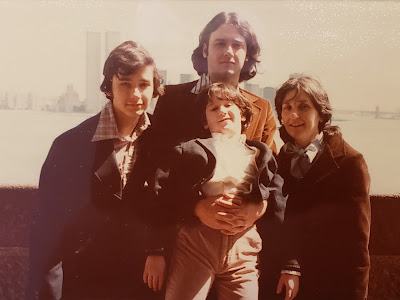