Blast from the past

I had told my kids about these, but I thought they were extinct. Removed by people who put "safety" above all other things. Recently, I saw what I believe to be one of the last of these in the wild: The Playground Merry Go Round. 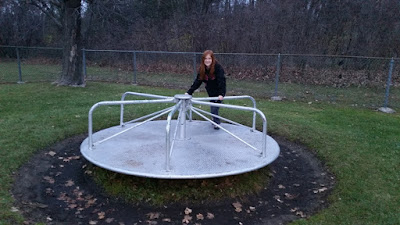 My old elementary school is across the street from my mother's condo. Every now and then when look longingly at the corner where the merry go round used to be. It's a little, plastic climbing wall now. I had told my kids about it and how much fun they were. I didn't think they would ever get to ride.

I first spied this merry go round after a rain. The trench caused by years of happy little feet running in circles was completely filled with water. Our fun would have to wait. Until today. I spun my youngest daughter around, took a few pictures and then hopped on too. 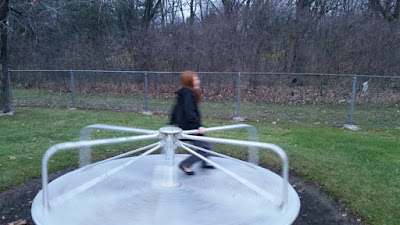 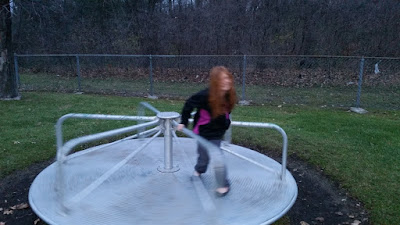 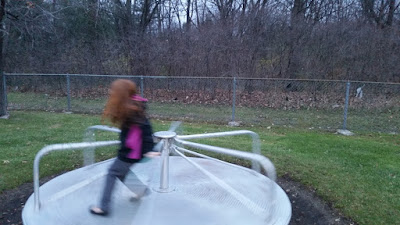 We laughed a lot and it took awhile for the merry go round to slow down. Then she spun me around and took some pictures of me. 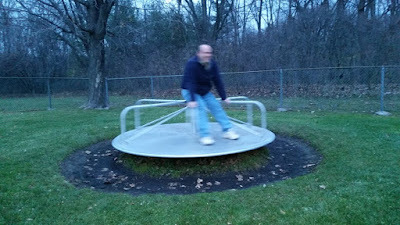 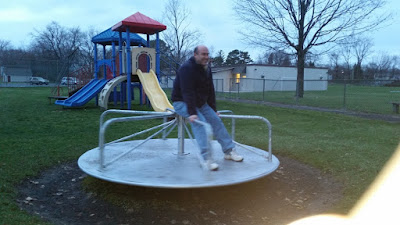 My older daughter was in a dance class during our fun. After the class, spun her around too. No pictures though, it was pretty dark by 5:30. I left pretty dizzy, but with no regrets. I'd totally do it again.
Posted by Jon in Albany at 6:47 PM No comments:

Not surprisingly, my view on sports championships kind of mirrors The Pizza Cognition Theory. In my opinion, when rooting for a sports franchise, no victory will ever be sweeter or more joyous than the first time your team wins it all.

Let me give you an example. I grew up in Connecticut and went to UConn. The UConn basketball team was slowly getting better and would make it into The Tournament. There was a miracle last second full court pass to a buzzer beating shot that basically caused the entire state to erupt. In Connecticut, this play is simply referred to as The Shot.  Unfortunately, two days after The Shot, Duke and freakin' Christian Laettner beat the Huskies with a last second shot of their own.

In the 1999 tournament, UConn went all the way. And they beat Duke for that title too. I remember everything about the night. We were at a co-workers house. I wasn't sure I wanted to go. I need space to pace and yell at the TV and generally support the team. I remember Duke coming back to tie the game. I remember being frozen and mumbling "not again, not again, not again." But UConn won. And it was thrilling. After the get together, we went home and I talked with my brother on the phone until a little after 3. That year, we spoke briefly on the phone almost every Monday night until the next tournament started. "How are you enjoying week 17 of being national champions?"

The UConn men's team has won the championship three more times. It's fun. We talk on the phone after tournament games. But it's never as good or sweet as 1999. And we don't talk about it all year long.

I was 15 in October of 1986. When the first pitch of the famous Game 6 of the Mets-Red Sox World Series was thrown, I was at a Billy Joel concert at the New Haven Colosseum with both my brothers and my buddy Rick. With Connecticut being the buffer between New York City and Boston, the crowd's loyalties were evenly split. Billy Joel would provide updates every once in awhile in between songs. There was a guy nearby watching the game on a itty bitty portable TV that probably cost a fortune - no smart phones in '86. The guy about died at one point. I'm assuming that was when Ray Knight made an error in the 7th. The concert ended but the game was still going. We hurried back to my brothers dorm at Southern Connecticut College and watched the end of the game in a common room. It was amazing. We jumped up up down. We hugged strangers. We celebrated with a beer in my brother's room (It was a long time ago so you can't be mad, Mom).

In the off chance you would like to relive that bottom half of the 10th inning, here it is, brilliantly reenacted in old school RBI Baseball.

The Mets went on to win Game 7 and their first and only World Series of my lifetime (so far). If they won it all this week, it would have been great. But it wouldn't have been as much fun as '86.

I don't watch much baseball. There really isn't time to follow the Mets. Instead, I follow a few people on Twitter who keep track of the Mets for me. Watching Daniel Murphy play was incredible. That was an amazing streak of home runs. Yes, he made some bad errors but without Murphy, there's no doubt Citi Field would have been dark this weekend.

This October was fun. And yeah the Mets lost, but they did it in classic Mets fashion - as painfully as possible. Maybe they'll make it back soon. I'm ok if it takes a little while. My kids will be older and could watch more than the first inning. You only get one shot at watching that first team victory. It would be nice if the girls could really enjoy it.

In other news, Chase Utley still sucks.
Posted by Jon in Albany at 11:20 PM No comments:

The Mets just lost so I'm going to complain about something stupid and petty and stupid and I would have probably let it go if the Mets didn't just lose. But I'm going to bitch and moan....about ketchup.

I like to think that I'm usually sympathetic to mistakes. I get it. Things happen. I already wrote about running out of stuff already here. I get it if a special sells out. And I get it if you thought you'd have enough but you misjudged and ran out. However, if there's an easy opportunity to restock what you're missing, I don't understand why a restaurant's management wouldn't just take care of it.

Tonight, the restaurant was out of ketchup. Our waitress explained that they were out and offered a bowl filled with some to-go packets of Sysco ketchup. As it turns out, the fries were good and I wouldn't have put ketchup on them anyway. Disaster averted...for me. I'm going to guess that 75% of the plates coming out of the kitchen come with fries. Other diners got stuck with crappy ketchup, or just had to go without ketchup. I know, tragic right?

At 5:30 on a Sunday with football games and a World Series game later, they're looking at some demand for ketchup with a night full of fries and burgers on the way. All they have is teaspoon packets filled with ketchup no one wants.

There's a supermarket across the street. They sell ketchup. So does Target, BJs, Walmart and lots of other places. Buy a few bottles, squirt some in a little dish and give it to people that request ketchup. If you got lucky and caught the hours right, Restaurant Depot would have cases of it. Problem solved until your next Sysco delivery, your servers don't have to uncomfortably explain that you're out of ketchup, and your customers will be happier without old packets of crappy ketchup.

There are many difficult aspects to the food service industry. Finding ketchup is not one of them.

Did I mention the Mets lost? And I may or may not be drowning my sorrows with adult beverages. The ends of games 4 and 5 were brutal.
Posted by Jon in Albany at 1:43 AM 2 comments: