Thanksgiving weekend was a blur. The meal didn't come off exactly as I had planned. The food was decent (scallops wrapped in homemade bacon were fantastic), but some the turkey was refusing to cook in the smoker. Also, at about 4 in the afternoon, it became clear that the kitchen refrigerator was not keeping anything cold. These two glitches threw my timing on everything off and in my own personal chaos, I didn't take any food pictures. I'll try to get it right next year.

The pancetta I hang last week finished drying over the Thanksgiving weekend. Here is a shot of the cleaned up slab. I squared up the edges to make it look nicer. I'm keeping the trimmings. The pretty piece will be split between co-workers Gina and Mike for their holiday cooking. 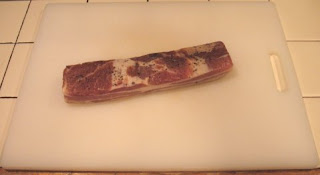 The Taste Of Childhood

I think everyone has one special taste, that one flavor guaranteed to make them feel like a kid again. For me, it is the taste of a "Grandma Cookie." Butter, sugar, vanilla, eggs, baking powder and flour are combine to make the dough. Logs of the dough are wrapped in wax paper and frozen. Once the dough is pretty solid, it is rolled out and shapes are cut with cookie cutters (the usual shapes are circles, moons, stars and card suit shapes - diamonds, hearts, spades, and clubs). The cookie is then topped with a cinnamon sugar and baked. The result is my personal heaven. Earlier today, my parents arrived for Thanksgiving with a big batch of these cookies. I'm writing this to get my mind off of eating them all tonight. 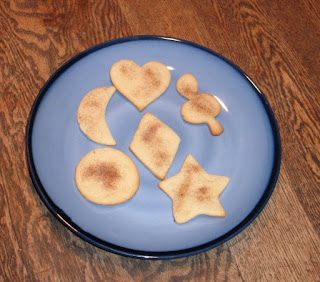 Whenever baking a batch of these cookies, part of the tradition is to use scraps from rolling out the dough to bake cookies in the shape of letters representing the names of the children that will be eating the cookies. My mother has taken that a step further in recent years and requests the guest list the week before Thanksgiving. If you are at the table, you get a cookie shaped like the first letter of your name. Here's my "J" cookie. Happy Thanksgiving. 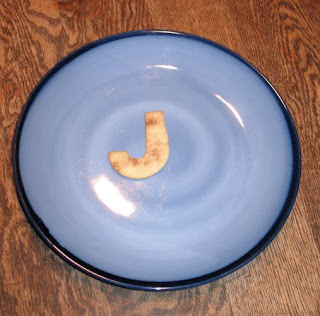 Here's what happened to the pork belly after air drying in the fridge overnight. I lit a chimney of lump charcoal and poured it into a "bullet" style cooker. They kind of look like R2-D2 and they are relatively cheap in the BBQ world. I got it about 10 years ago from a Home Depot. This came with a water pan, but I almost never use it. For some reason, probably a barbecue forum I followed during my formative BBQ years, I prefer to cook directly over coals.

So the coals go in, the bacon goes on skin-side down, a handful of apple chips gets tossed on the coals, and I head back inside to help clean the house for Thanksgiving. 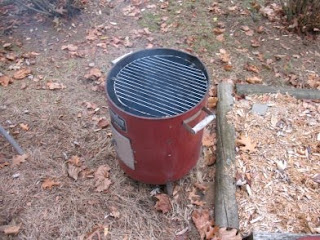 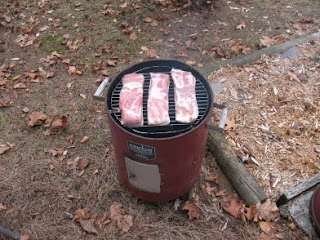 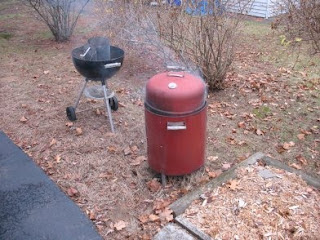 A little side note about the small kettle grill in the back. That is my first grill. It is an 18" Weber kettle that I got when I first moved to the Albany area. I was fresh out of college - sophomore year of college was the best 3 years of my life, unemployed, and living in a 2 room attic apartment with my now wife in Rotterdam. I was in a Fay's for some reason (remember Fay's? Only the best pharmacy ever) and saw this grill on sale for half off. I hemmed, then I hawed, then I decided half off was still too much. After all, what good is a grill if you can't afford anything to put on it? About 2 weeks later I was back in Fay's for something and the grill was still there. And the price had been cut in half again. And that was the beginning of my love affair with cooking with a live fire. And now that you've suffered through my stroll down memory lane...here's the finished bacon. I left the thicker, third piece on a little longer and it missed the photo shoot. 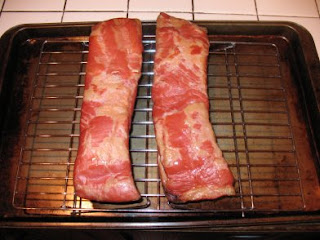 The bacon got chilled then put in the freezer for about half an hour before being sliced, packaged and frozen. I wanted to get a picture of the slicer I have on loan for my mother-in-law, but...my hands were a little bacony and you need two hands to run the slicer. I'll get a picture next time. It's bacon, there WILL be a next time.
Posted by Jon in Albany at 10:24 PM No comments:

I picked up some pieces of pork belly from the relatively new Asian market on Central Avenue in Albany. Four pieces weighing about 5 pounds in total. One piece went into a pancetta cure (salt, pepper, bay leaf, garlic dark brown sugar, some thyme and pink salt). This is what it looked like coming out of the cure. 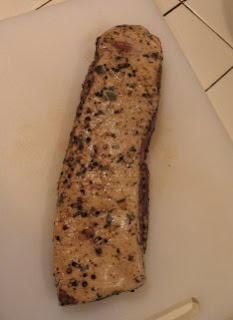 The pancetta was then wrapped up in cheesecloth and put into the makeshift curing chamber in the basement. I smile just knowing I have that set up down there. Simple pleasures...Anyhow, the pancetta will hang for about a week before I split it up and give it to some friends at work. 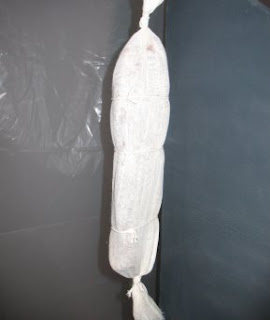 The other three slabs of pork belly just got rinsed too. They went into a simple bacon cure (salt, raw sugar, pink salt) and are going to air dry in the fridge overnight. They will get smoked tomorrow. I think I will use some apple wood. Some of this bacon will be used to wrap scallops on Thanksgiving. 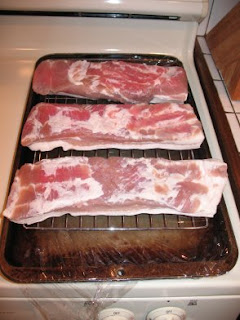 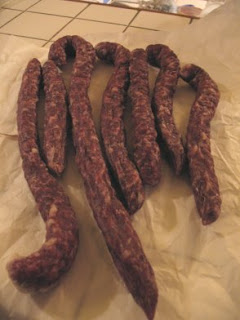 Took it down and weighed it last night. There was a 45% weight loss. I was nervous and thought it might be too much. Not a problem. I think it tastes pretty damn good. I would also say it is better than a lot of higher end salami that is available in this area. A while back, I used to be my own 'toughest critic.' That has changed and earlier tonight, I faced my current toughest critics.

My daughter Allison gave it the rating "I love it."

My daughter Casey gave it the rating "Yummy, Daddy."

The two of them ate the rest of the small salami I had been cutting for tastes. Needless to say, I was a wee bit proud of my efforts. 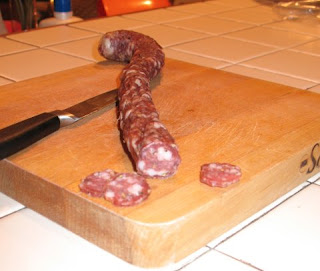 The next step was to set up a curing area. I had a 12 foot length of poly and decided to with something close to a 3 foot square shape. Instead of the original plan to use staples, i bought small hooks that I screwed into the floor joists. Using a punch I put holes in the poly and hung it like a curtain. This way, the chamber can come down a lot easier. I have a humidifier with a humidistat set at 70%. I also added a shark fin I had in the basement (it is a throwback to my younger parrothead tailgating days). The fin acts as a wall between the humidifier and the salami. I thought the humidifier fan moved to much air and the fin keeps the salami out of the breeze. Using the uotdoor part of an indoor/outdoor temperature/humidity weather gadget, I found that the relative humidity closer to the floor was pretty constant at about 70%. Here is a shot of the chamber, ironically located next to a home made dehumidifier (the duct work in the lower right of the picture). 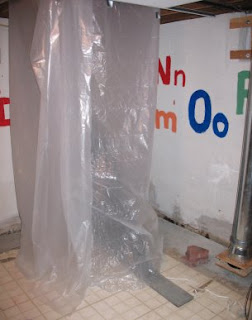 Now it was time to grind the salami. I Use the Kitchen Aid attachment. Fat was ground through the larger plate, meat through the smaller plate. Someday, I think I will upgrade to a dedicated grinder, but this attachment has been working for the amount of sausage I make. 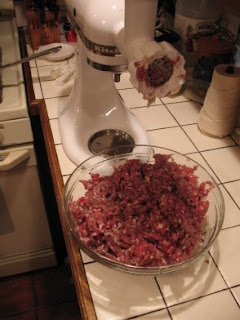 Toasted fennel seeds were added and every was mixed well. Then, it was into the sausage stuffer to get pushed into casings. 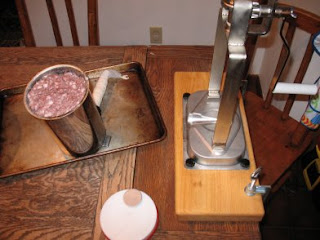 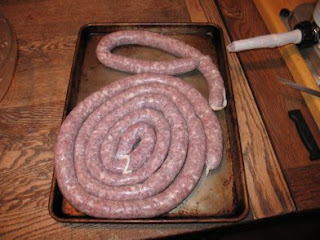 The hardest part of the prpject was tying the salami for hanging. I usually make a fresh sausage and twist it into links. Here, I had to tie them in a way where the know could support the weight of the salami. Then I used more string so the salami would hang low enough in the chamber. I ended up using what I would describe as a "bizarro" surgeon's knot. So far they have all held up. Here's a shot of the salami starting to age. 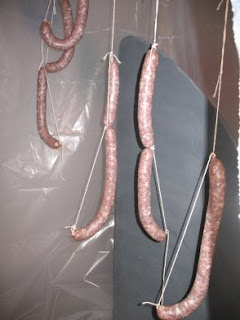 I have been meaning to make a Tuscan salami for a few months now. I decided to try and have it ready to eat for Thanksgiving. Not sure if I'll make it, but it should be close.

Chef Bob Del Grosso made a similar salami over at A Hunger Artist. I'm not sure how many times I've read the post, but I promise the count is over 10. I compared his recipe to the Tuscan salami is the Charcuterie book and they were pretty similar. I followed the Del Grosso formula switching Instacure#1 for Instacure#2. I also like the way Bob sets up his percentages of ingredients. Being the nerd that I am, I set everything up in a Tuscan salami spreadsheet. Once you enter the weight of the meat in grams, the spreadsheet calculates how many grams of the rest of the ingredients you need including back fat. I kind of cheated with the bactoferm. I've seen people use a gram of it, and I've read that you can't use less than 5 grams. I split the difference and went with 3 grams.

The rest of the plan is to build my version of a mini curing chamber Bob put in his basement. I picked up some 3 mil thick poly drop cloth at a Lowes. I'm going to staple it to some floor beams and place a humidifier with a humidity sensor inside. I'm going to skip the fan for now and just open everything up to circulate the air once in awhile. The basement is typically in the low 60s. Hopefully the humidifier will keep the humidity up. Here is the recipe I used and some pictures of the meat. The meat is going to see a 3 or 4 day pre-grind age. I'll use the few days to get the chamber set up. 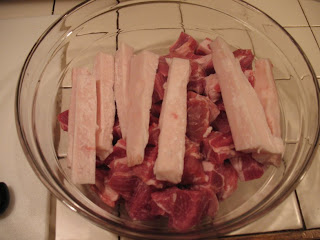 Ready for the rest of the ingredients. 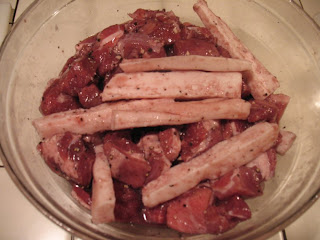