Randomness from the week

1. Last week the kids found out who there teachers were going to be this year. A few days later, the kids received a letter from the principal asking them to wear school colors on the first day of school for a big assembly. I wouldn't have thought it was a big deal seeing as they had worn school colors to a number of spirit days and other events each year of school...

But never on the first day. They had outfits picked out for the first day. Plans were made before being rudely interrupted. It's been a few days. They are still upset and stressing over the search for new clothes that meet certain set of first day outfit requirements and contain school colors.

2. I set off a little firestorm redirecting the kids' first day outfit anger at me. Allison came up with the idea of making some Italian ice. Unfortunately, there was no time to make Italian ice before the kids went to visit my in-laws for a few days. So on my way out, I told Allison I would have everything at the house when she got back and then asked if she wanted to keep scraping a pan like the recipe called for, or use the ice cream machine. She said she wanted to use the ice cream machine and I headed off to work.

Apparently, the kids didn't remember we had an ice cream maker. They were both there the last time the ice cream maker got used but that was a few years ago. It's one of those appliances that gets used twice a decade. On the ride to my in-laws, my wife was peppered with questions:

This isn't going to end well for me. I know that their imaginations have lead them to believe there is a full sized soft serve ice cream machine hidden in the basement when in reality, it is a small little Cuisinart thing the size of a toaster. I've already cleaned out the little freezer insert. I should go put it in the freezer immediately.

4. The bottom rubber thing (I believe that is the technical term) on the bottom of the side door to our garage was falling off. I took the door off the hinges to get a better look. Instead of being able to just replace the unattached bottom rubber thing, I found a lot of dry rot. Turns out the bottom rubber thing was supposed to be attached to wood that had disappeared. Not wanting to have to replace the whole door and deal with realigning hinges, I dug out all the dry rot and replaced it with two types of epoxy, some paint stirrers used as filler and a new bottom rubber thing. In the end, I think it cost about $25. Hopefully this particular "fix" will last a few years.

5. I spend a lot of time thinking about pizza. Probably too much time. Between vacation and a few other things, I haven't spent much time on the pizza forum. I went from being right on top of things to 26 pages of forum threads behind. I was surprised to have found a knock-down, no holds barred argument over leavening agents suitable for a classic New York Style pizza. I was actually taken aback by the fight having never seen anything that mean spirited on the forum. The main participants were two guys that I have never met, but I have come to respect and admire both of them. I was relieved to see it had kind of ended and one of the guys related it to brothers fighting. But still, I've got a shit-ton of catching up to do.

6. More pizza. All of of backyard plans seem to stall out because of pure indecision. We've gone around in circles several times. Doesn't look like the wood fired oven is going to happen in 2014. There's still a good chance we will make progress on the yard and maybe get the foundation set, but I don't want to race winter with a masonry project. I want to be able to take my time. Get it right.

On the other hand, I hate our oven for making pizza. It just doesn't get hot enough. So as a temporary band-aid, I bought a Black Stone pizza oven at Lowes. There's been a lot of beautiful pizza coming out of them on the forum. Hopefully I'll be able to make some too once I get it assembled.

7. Still more pizza. Back when I made the Firedome, I had to trim an inch or two off a peel so it would fit through my makeshift oven door. I've grown tired of only being able to make really small pizza and I'd like to learn how to form larger dough balls. During lunch today, I set off to Bed Bath and Beyond to check out their peels. Have I mentioned I take pizza too seriously?

The only pizza peel they had there was basically a pizza peel shaped cutting board for $35. C'mon. 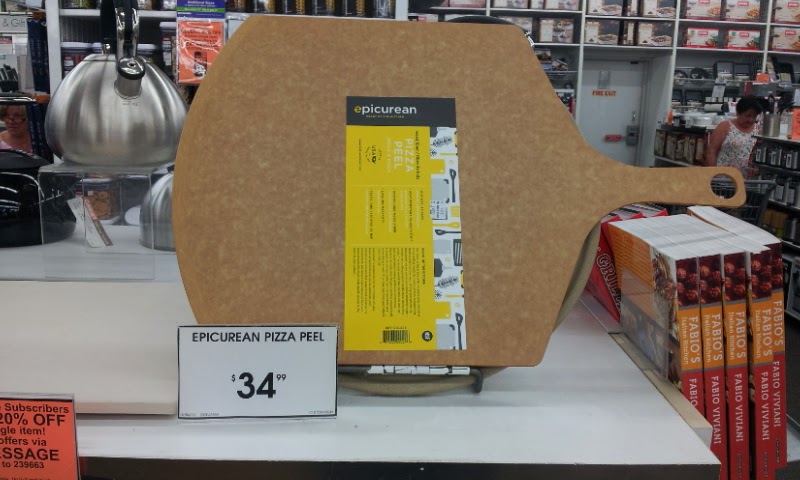 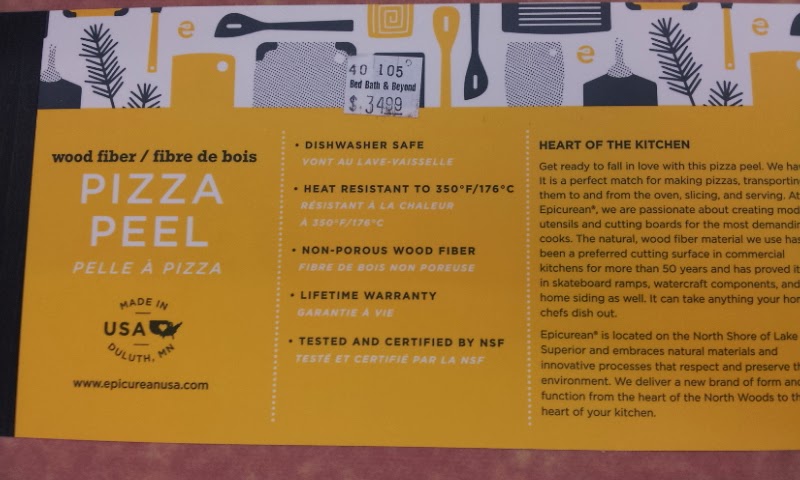 The peel is made with wood fibers and some kind of resin. It's also dishwasher safe. Not sure why you would want that, but maybe someone out there does. I don't know if you can read the "heat resistant" section out in the second picture. This $35 cutting board is "heat resistant"  all the way up to 350 degrees F. I can even get my crappy oven up to 500 degrees. I see this $35 piece of saw dust and glue melting all over someone's pizza stone or steel. I should be able to take a deep breath and move on, but instead I took pictures and then was pissed for the rest of the day. It's not healthy. I'll see if I can get to a restaurant supply store tomorrow.  I bet I can get a better peel for less than half the cost.
Posted by Jon in Albany at 11:56 PM No comments:

Vacation, all I ever wanted.

If ever there was a good week to be kind of unplugged from reality, last week was it. As luck would have it, we were on the road. In a rented minivan. Because of a fender bender. My wife got hit driving through a parking lot. Just in time for our road trip. Not a big deal, just a pain in the ass. The vacation began with dropping off a car at a collision center and bringing home the rental. We loaded that bad boy to the roof and headed south. Day one, we drove to Maryland and stayed in a hotel. Day two, we continued driving south to North Carolina. Now we knew we were heading through Goldsboro, NC and pretty close to the legendary BBQ joint named Wilbur's. Wilbur's has the best pulled pork I've ever had. We used to stop in when my brother and sister in law used to live in Raleigh. I haven't been there in 11 years. The GPS said we were going to be about 20 miles away. After sitting in a lot of traffic, it was going to take too long to stop in so we skipped it. Until, we came around a corner and it looked very familiar. and then there it was. 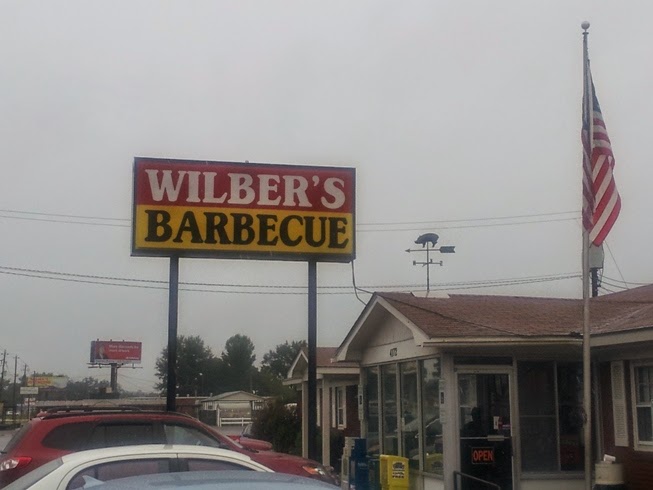 After swerving across a lane of traffic, we parked and went in. We had eaten lunch already so I picked up some pulled pork to go. A pound of damn good pulled pork, 4 buns, 2 dozen hush puppies, and a container of slaw...I got change from $11. From Wilbur's, we had about 2 more hours on the road. We checked into the condo and this was the view we were going to have to deal with for a week. 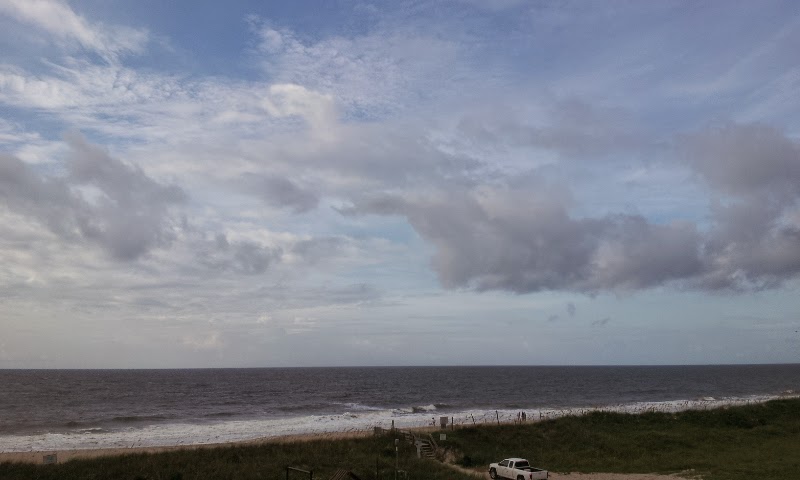 Rough, right? We were down there with another family and we had a great time. A lot of swimming in the ocean. There was a sand bar on this beach so you could be 40 feet out into the water and it was still only 6 feet deep. The waves would gently pick you up and put you back down. The weather was perfect all week and there was only one day that the waves were a little choppy. And this happened too. In front are my kids, my friend Joe and his kids. That little fin in the back is one of several dolphins that swam by. 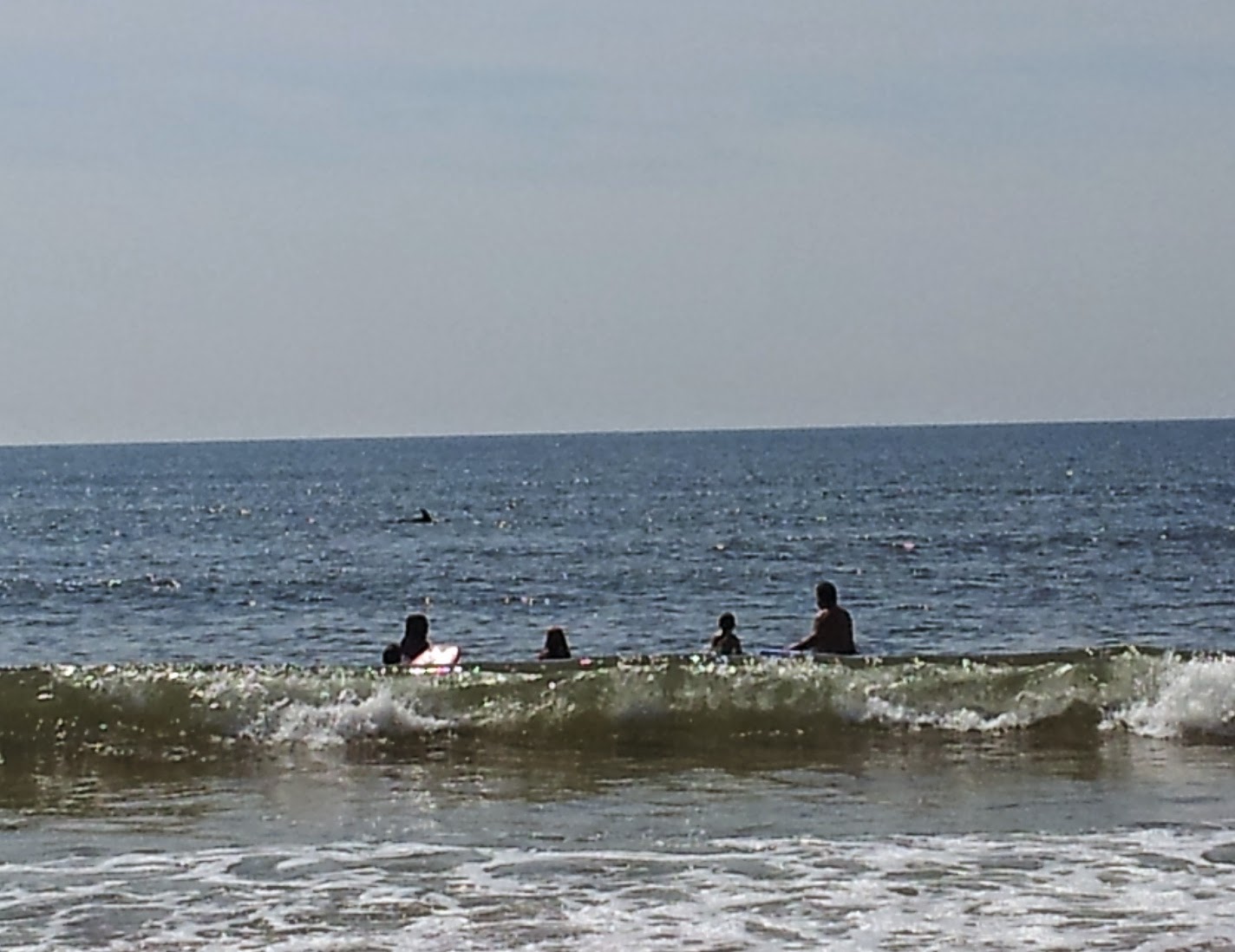 We saw sea turtles at a rescue center. 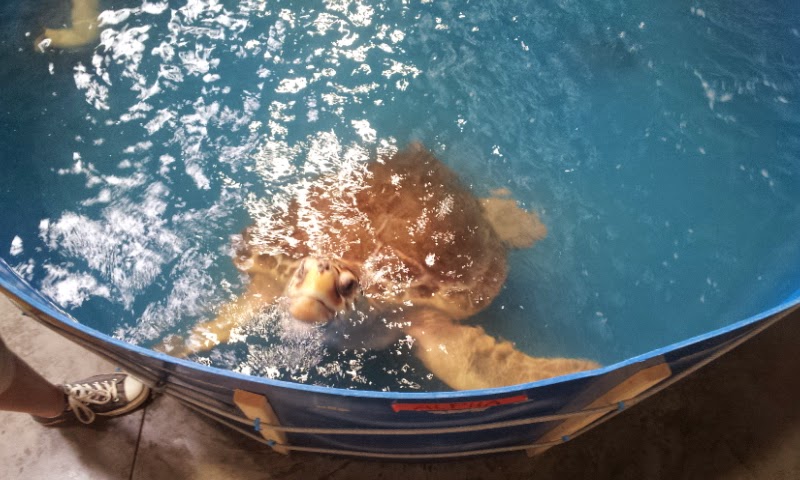 And this happened every day at 4:00. Nothing like some beach side grown up quiet time juice. 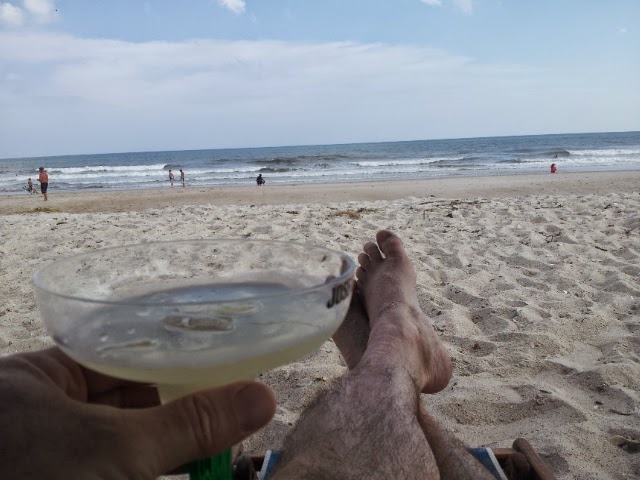 Margaritas are just better with sand between your toes. I had never heard of this, but apparently sharks go through a lot of teeth. These teeth fall out and then fossilize in the salt water. Once you know what too look for, you can find a lot of teeth.  Some are still pretty sharp and others have grooves. My friend Joe is a shark tooth hunter savant. 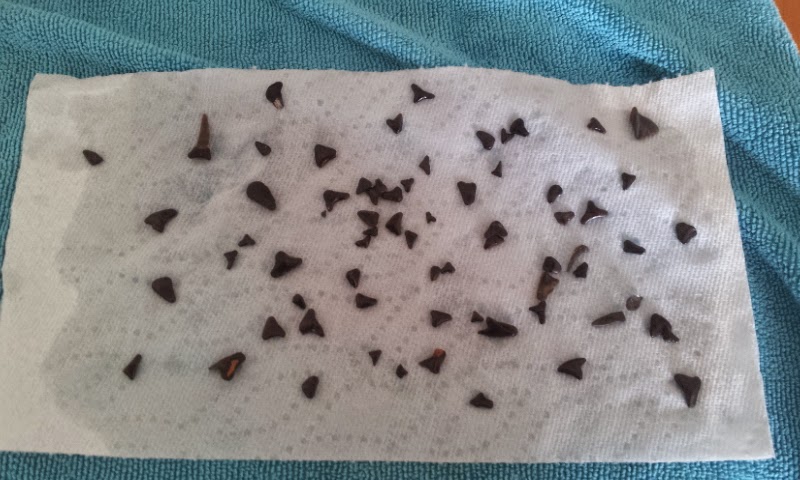 We also popped into an old peanut plantation. It was an interesting tour. The family that owned it was pro-union during the Civil War but had about 50 slaves. Here's an old peanut picker. Kind of looks like a Rube Goldberg contraption. 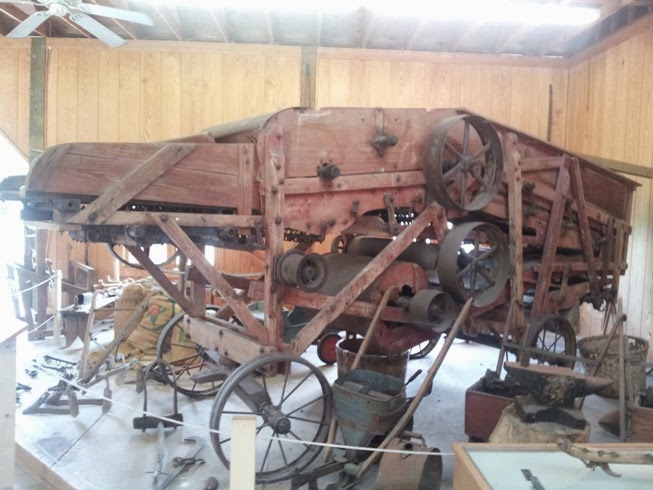 The plantation had a blacksmith shop too. Check out this huge bellow. 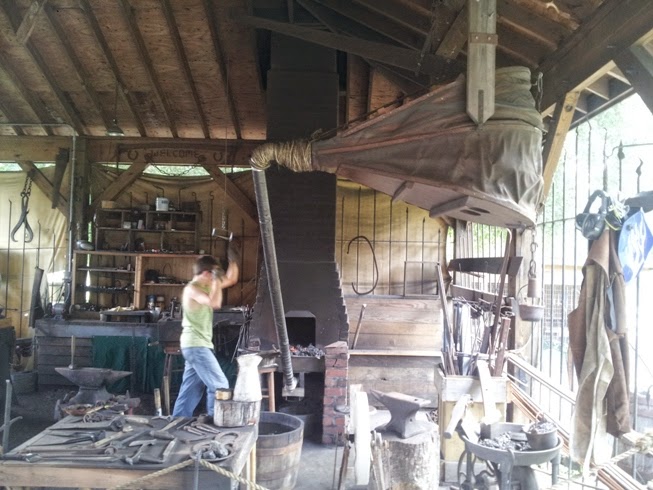 One last look at the beach before heading north. 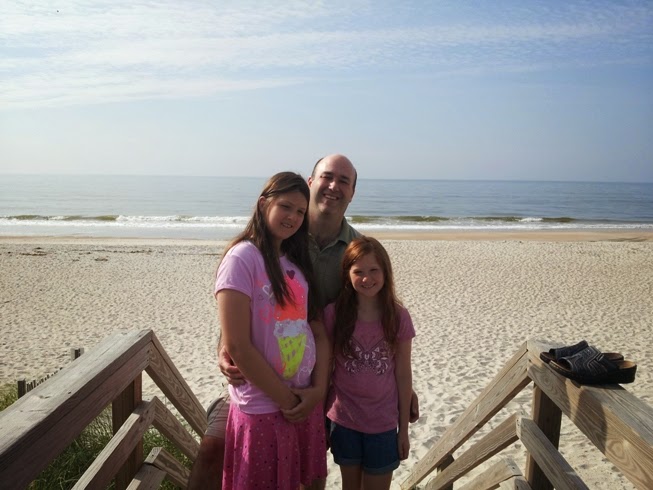 We spent the night in Newark, Delaware. In the morning, we headed to Citi Field for a Mets game. 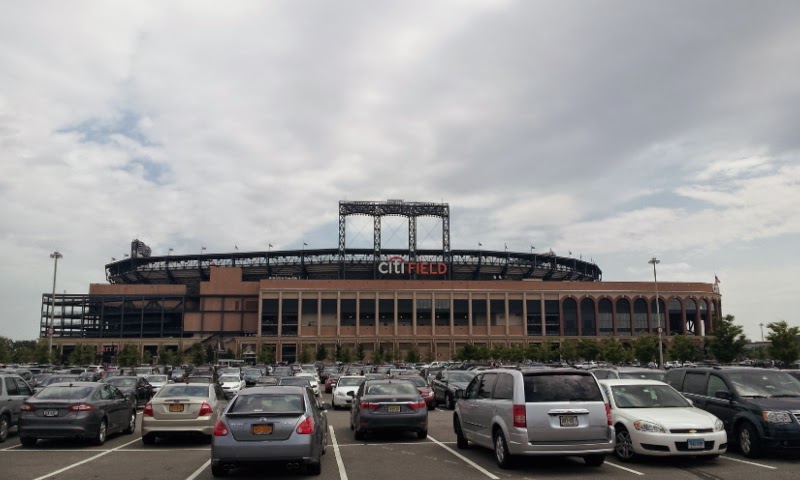 I'm not a huge baseball fan, but if I'm picking a team, it's the Mets. And while they might be in a new stadium, not much has changed. It was a close game with the Mets down 1-0 for most of it. They rallied in the bottom of the 8th to tie it up. They bring in their closer while blasting Journey's Don't Stop Believin' - possibly the worst song to pump up the crowd. They cut the song off just before the "Some will win, some will lose, some are born to sing the blues" line. Here we go. First pitch...home run. Then they get the next 3 batters out. The Mets go down 1-2-3 in the bottom of the 9th with the last batter being called out on a check swing. What more could you want from a Mets game?

It was a good time. I'd do it again. How's next week looking?
Posted by Jon in Albany at 1:02 AM No comments: