After Thanksgiving, I brought my mother back to Connecticut. After I pulled out and started the return trip home I had an idea. The road I take goes pretty close to a restaurant in Stratford. When I was a kid, the people running this place made the pizza that is my personal Pizza Cognition Theory pizza and are really the inspiration to the wood fired oven in the back yard. The obsession started there. The current restaurant is fancier than the original location. Pizzas are only to go which would be fine tonight.

I pulled over, looked up the number on the phone and ordered two pizzas. A cheese and one with bacon. My plan was to pick up the pizzas, then keep driving and stop in a VFW parking lot, eat and then continue on my way home. I got there and paid as the pizzas were coming out of the oven. The tops looked good and had that hypnotic cheese boil going on.

Off I went, basically adding no extra travel time to the trip. Perfect.

Well, the lights were all off at the VFW so I drove right past it in the dark. No worries, there was a gas station a little ways up. I'll eat in the lot there, and then run in for a drink.

I've had the pizza in the back and considered it kind of a hollow shell of it's past. It was never bad pizza and there were always a few bites that brought back memories of pizzas from long ago. Not this time. The crust had nothing in common with the historic pie. It was under salted and under fermented. The sauce was flat. The flourish of was oregano missing and even the cheese melt was different. And the worst part, was that the bake was completely unbalanced. The top was done but the undercarriage of the crust was blond and missing any browning or char the old pizzas used to have.

I wonder if the new oven isn't as good. I'm tempted to try a pizza from the original location. The photos don't look promising, but you never know. It is a Brazilian-Italian place now. Interesting combo. But I think I'm done trying to relive my pizza memories here. If I return, it will be for something else on the menu....but probably still a pizza to go. There's always a little bit of hope left.

Just like pouring a beer in a wine glass doesn't make it wine, roasting any cut of beef doesn't make that roast Prime Rib.

I don't get the upside of putting a sign for a politician in your yard. Is it supposed to change someone's mind as they walk or drive by? Is it just for name recognition? Why?

I've only had a political sign in the yard once. The few times I've been asked to put a sign up, I just say I live at the end of a dead end street. No one but me will see the sign. But the time I put a sign up, one of my neighbors was running, it was his sign, one house over had the opponent's sign and he wanted one of his near the opponent's sign. I avoided the awkwardness and said sure.

I voted for the opponent.

That was some time ago. Years before Trump's Republican party. These days I would have dealt with the awkwardness and said something like, "I suspect it will be a full generation before I even consider voting for you or any other Republican." And based on some political conversations in the time since, I don't think he'd ask again, to spare himself the awkward conversation.

I was left with questions.

Why even bother, there isn't much traffic past this driveway and the election is in 3 days?

You know voting for him is a vote against your daughter having decent healthcare in the future, right?

You've got signs for Zeldin and Velella, but skipped Liz Joy. She's too bat shit crazy for you but the other pair are OK?

The "Don't say gay" bill would lead to a lot of really, really bad, cruel things. You're good with that?

I was disappointed in my neighbors. Maybe I'm over reacting. Sure doesn't feel that way though. On the positive side, Zeldin and Velella both lost. No idea if the signs had any impact on the neighborhood vote, but they didn't work overall.

I get not being thrilled with Hochul. I'm not. The campaign donation followed by a big contract is sketchy at best. The football stadium is stupid. I guess that's her expensive bridge. Hopefully she doesn't name it after her father. Her election bid was one October screw up away from a loss. I saw something on elections recently that made a lot sense. Basically it said elections are like public transportation. You pick the candidate that is going to get you the closest to where you want to go. I don't want to go anywhere with Lee Zeldin.

Saw this from a Canadian election observer. It's got to be tough to watch. It ain't exactly fun being a part of the mess either. 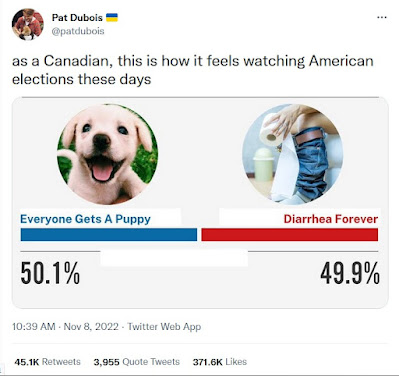