Remember back in the 80's when every good comic strip published books of all the comics? Far Side books, Bloom County books, Calvin and Hobbs books. In our house we also had pile of Doonesbury books. And while I might not have gotten every joke at the time I was reading Doonesbury, a few of the strips stuck with me. Probably most of what I know about Watergate is from Doonesbury. Not sure what that says about our education system or me, but there you have it.

When the brand new White House Press Secretary called a press conference to spend a few minutes complaining about crowd size, I was immediately reminded of Doonesbury cartoon from one of those books. Not sure why this particular cartoon stuck with me, but it did. Through the magic of the internet, I was able to look it up. Would you believe there is a Doonesbury search engine?

I remembered it was at the White House, I remembered the last two panels distinctly. And without too much effort I was able to find it. The strip originally ran on Sunday, April 7, 1974. Unfortunately, the image isn't very clear.

I had no idea who the two men were when I read this in the early/mid 80s. The voice on the left is White House reporter Hugh Sidney and the voice on the right is Nixon press secretary Ron Ziegler.

Panel 3: ...in sum, the information available to me at this time does correspond to my knowledge at the time of my previous statement.

Panel 6: Ron, sometimes I imagine you get up in the morning, look in the mirror before you've shaven, and think to yourself, "Ron, you're about to begin another day of evasion and deceit."

Panel 7: Here's my question, Ron: What do you do after you've come to such a realization?

I have no idea why out of books and books of cartoons I remember that one so clearly. It's probably pretty obvious as to why it currently came to mind. In the last reporting I saw on the press secretary, when he said, "No, I'm not confused" it felt like he was channeling Martin Short's character Nathan Shurm. 
We last left off with the first curing fire. I did several small fires and then they started to get a little bit bigger. I have a temperature gun and I was keeping track of the inside and outside temperature of the oven. As the fires progressed you could see the color of the top of the oven change as the refractory concrete lost water. During one fire, the outside dome temperature was in the low 200 degree range and steam was visible. There was actually a low hissing sound too. 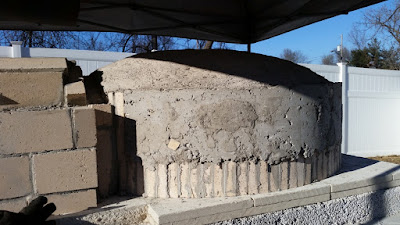 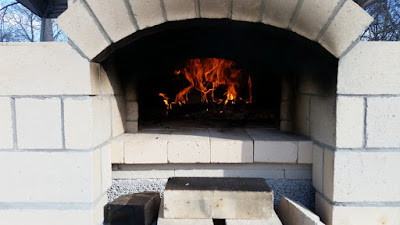 On Sunday, I started with a small fire and slowly built it up. I noticed a little bit of steam leaving the oven, but not much. After an hour or two, only one spot on the wall had a little steam still coming out of the concrete. The weather wasn’t bad so I went ahead with the insulation planning to do this steaming spot last. When I got the board insulation for under the oven floor, I also picked up two boxes of ceramic blanket. The blankets were rolled up like a sleeping bag in the boxes. Each blanket was 1 inch thick, 2 feet wide and 25 feet long. Through an absurd amount of estimating, re-estimating and estimate checking, I calculated that 2 rolls should give me 3 inches of insulation around the oven. I had read that this can be nasty, itchy stuff. I was as covered up as I could be – long pants, crummy work jacket zipped up all the way, gloves, eye protection, and a dust mask.

The first layer was the learning layer. I probably made too many cuts, used smaller pieces and generally made a little bit of a mess. Once that layer was on, I saw how I could cover most of the oven with 3 bigger pieces and then fill in the missed spaces with trimmings. It worked out pretty well. I got three inches of insulation around the dome and a little bit of scrap in case I need to fill some extra space when making the oven door – the current oven door is a stack of bricks.  Sunday night at 8:00 the dome temperature was just under 450 degrees. I stacked the brick door up and left everything uncovered for the night since the weather was supposed to be cold but precipitation free. Monday morning, the temperature was about 320. Not bad. 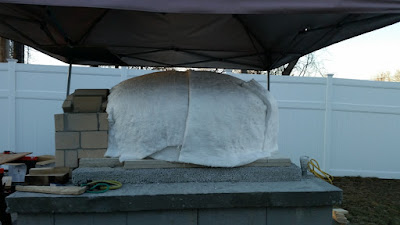 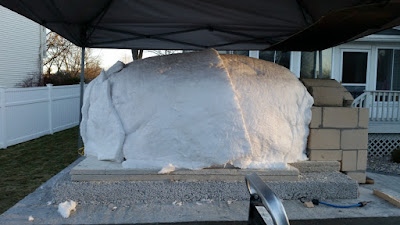 On Martin Luther King Day (1/16/17), I started another fire and was able to get the inside oven temperature to hold around 600 degrees.  Around 3:30, I used a scrap piece of 2x4 to move all the coals from the center of the oven toward the left side of the oven.  I added another small log and kept the fire going. The right side of the oven was holding in the mid 600s. Around 4:00, I soaked a crummy towel with water and used a garden rake to clean the ash off the oven floor not covered with coals and burning logs.

You remember the Puffy Shirt episode of Seinfeld? The other story line in the episode is George getting a job as a hand model. Toward the end of the episode everything is going right for George and in his excited happiness he exclaims, “I’m busting, Jerry! Busting!” 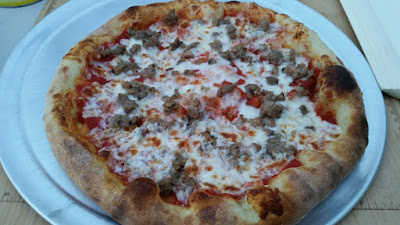 I made 8 pizzas. They were pretty good. I am confident they will get better. My usual dough came out a little crisper too. I’ll have to mess around with the hydration to see what that does. Also, I should have gotten the dough a little warmer before I stretched it. All in all, a good first run. No one left hungry. 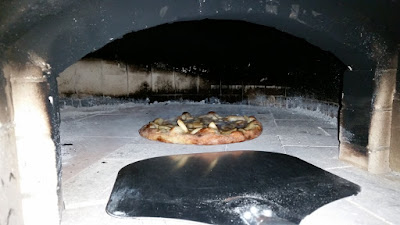 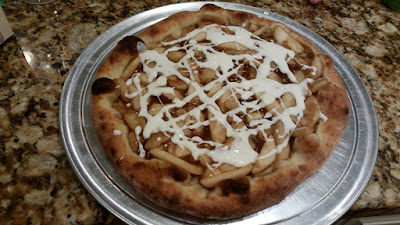 I left the oven door open so it could cool off before I covered everything up. The dome temperature this morning was about 250. Not quite cool enough to close everything up, but precipitation is in the forecast. I’ve got everything covered except the door of the oven. The canopy should be enough protection until the oven cools to ambient temperature. Now I’ve got to figure out how to build a permanent enclosure.