Dinner on my own

I recently ventured off for dinner by myself. The kids were at my in-law's house and my wife was at work. I set a course for Mr. Pio Pio because I had wanted to eat there for awhile and hadn't found the time. The place is definitely a hole in the wall. Not that there's anything wrong with that. In many cases, I'd argue that's a positive. I took a seat at a small table in the back next to a wall-mounted TV. Took me a second (I took French in school) to realize that the TV was volume was muted and a Latin radio station was playing. The music seemed to match that particular segment of El Gordo y la Flaca pretty well. As near as I could tell, El Gordo y la Flaca is a Regis and Kelly kind of show if  Regis put on a hundred pounds and Kelly wore short shorts.

The Yelpers recently steered me to Eva's in Syracuse so I was ready to give them the benefit of the doubt. I also saw Pernil on the menu. I've heard of it but never had it. The Arroz Con Pollo ($7.95) was tasty and quite a large dish. The chicken was a touch dry but I still enjoyed the dish. 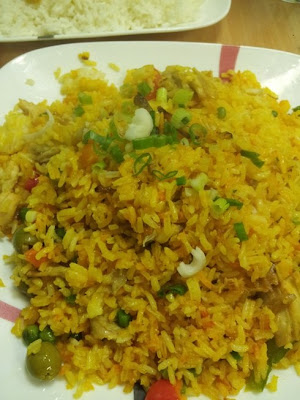 The Pernil ($8.50) was also pretty good. I was hoping it would be more flavorful than it was. The bites that included the little bit of sauce/parsley were the best. 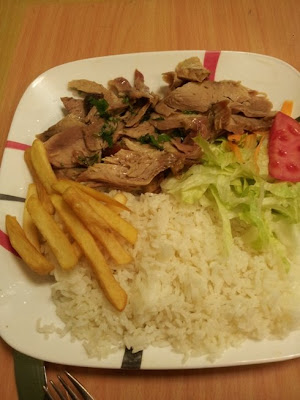 One of the dishes, I'm guessing the Pernil, came with this hot sauce. It is a pretty flavorful sauce that reminded me of Lottie's Barbados Hot Pepper Sauce, just a little runnier. Remember when every mall had two stores that only sold hot pepper sauces? They all had Lottie's. 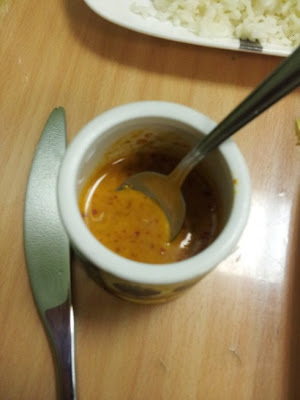 I sat next to a very nice family. The father recommended the green sauce over the hot pepper sauce. Next time. They eat here at least once a month. I enjoyed my visit. The food wasn't fantastic, but it was good and most dinners are under $10. The feeling I got from the place was that I would be able to find something I loved, it just wasn't the Arroz Con Pollo or Pernil and I'd have to keep looking.
Posted by Jon in Albany at 11:18 PM No comments:

We went to the Troy Farmer's Market this morning. And if you take some fried up Modernist-ish bacon, 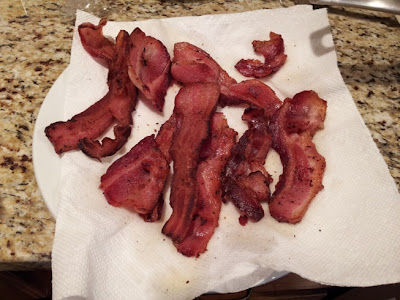 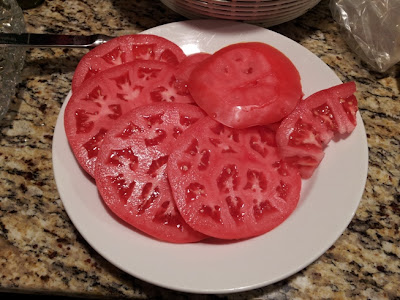 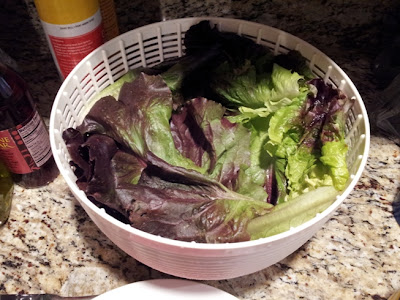 and some good bread... 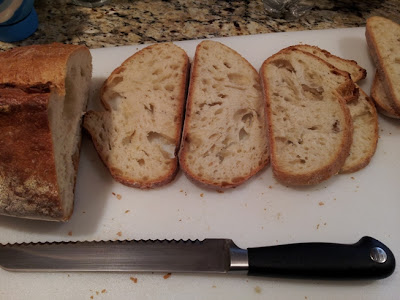 then you can enjoy a blurry BLT. 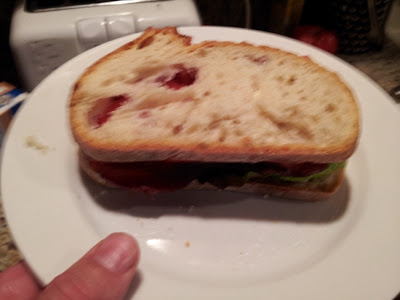 A sandwich so nice, I had to eat it twice.
Posted by Jon in Albany at 11:52 PM No comments:

Had dinner at Mingle on Delaware Avenue tonight. I really liked the restaurant. They are currently offering a "Flavors of DelSo" cheese plate with paired beers or wines. The cheeses were selected by the restaurant's future neighbor The Cheese Traveler. The crackers were made by current neighbor All Good Baker's. The cheese and crackers were fantastic. I thought the beers were OK and wondered if the wines might have been a better pairing. I enjoyed the the entire dining experience and look forward to returning.

And now, my one and only cheese plate story: When we were on a cruise to Bermuda, one of the nightly dessert options was a cheese plate. I ordered it on the first night. It was good, but the best cheese on the plate was the brie. On the second night, I asked if the cheeses were the same. They were a little different. I ordered the cheese plate with a little extra brie. The third night, I skipped the other cheeses, asked for just some brie and received a plate with a pretty hefty portion of brie. Later that evening, I overindulged at the bar, but that's another story. The fourth night, I was still a little hungover and going to skip the cheese. As the waiter came over to take the table's desert order, he presented me with a lovely plate completely covered with slices of brie.
Posted by Jon in Albany at 10:44 PM No comments:

And I went down to my old neighborhood
The faces have all changed, there's no one left to talk to
And the pool hall I loved as a kid is now a 7-11

Over the past 2 months, we've been slowly leaving the house my parents bought 3 weeks before their wedding in 1959. As the process literally moved along, I have had this Social Distortion song rolling around in my head.  This weekend, the move kicked into high gear with a U-haul, an amazingly popular "free stuff in the driveway" giveaway, and a lot of help. Earlier today as I made one final dump run, I pulled over and snapped this picture. Because of the song and because the 7-11 I loved as a kid, is still still a 7-11. I was never any good at pool. 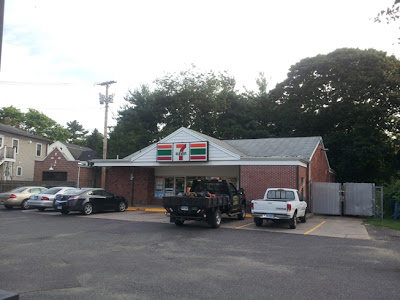 Tip to all legal college drinkers: A big gulp makes an excellent, cheap mixer. Go heavy on the ice, light on the Coke, then add some other adult beverage of choice and you are go to go. I was a Seagram VO guy back in the day. Classy, right? And the secret to a good microwavable "egg and cheese ham-lette"...add the pepper before microwaving. One time we were in there and my buddy Derek bought a Moon Pie. On the wrapper it suggests microwaving the pie. So he does. The moon pie makers weren't thinking of strong commercial microwaves and even the lowest button proved to be too much for the moon pie which inflated, expanded and then exploded all over the inside of the microwave. It happened over 20 years ago. I'm still laughing.

Some institutions like a town's 7-11 manage to remain the same, other things change. For example, my bedroom never looked like this when I lived in it. 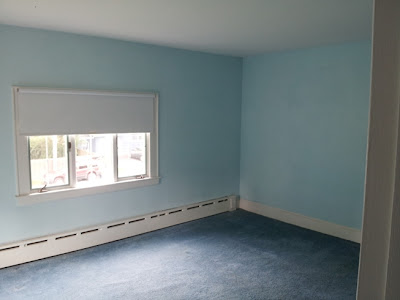 Truth be told, when I lived in it, I doubt you could have seen the carpet through the combination of junk and dirty laundry.  As I drove away from the house this afternoon, after having spent my last night there, the Social Distortion song was back.

But as one chapter closes, a new one begins. The new chapter has a pool and has already started its own good times. The condo's pool is apparently home to several new Olympic events including synchronized jumping 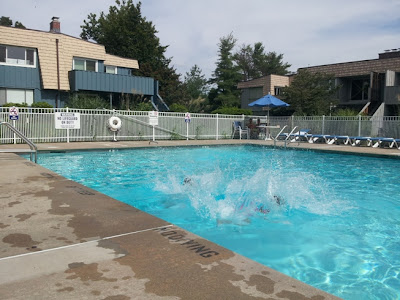 And the very challenging (don't try this home) sport of synchronized one arm handstands. 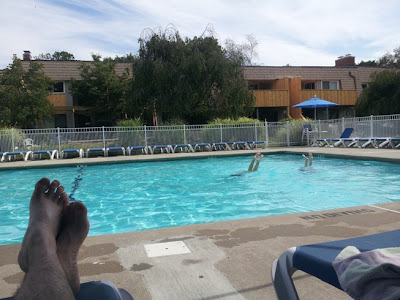 Even though the Olympics are over, the kids are still cheering for Team USA. In the events, they pretend to be other countries and the other countries never win. It's kind of funny to watch them sabotage their own performance. "Hey, Allison. I'm China and I'm doing the puppy paddle!"

Posted by Jon in Albany at 8:50 PM No comments:

My pre-order of Salumi came in the mail today. Busy weekend ahead, I probably won't get to flip through it until next week. I hope it's good. 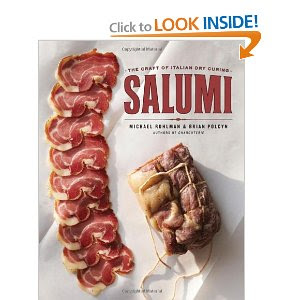 I loved this place. If I lived closer, I'd eat here too often. I took the kids to Syracuse for an extended weekend. I had some hotel points, planned out some day trips and was counting on the hotel pool providing hours of entertainment (it did). In the rush to get out the door, I did a quick yelp search of the area and came across a 5 star restaurant withing 10 miles of the hotel. Eva's European Sweets. 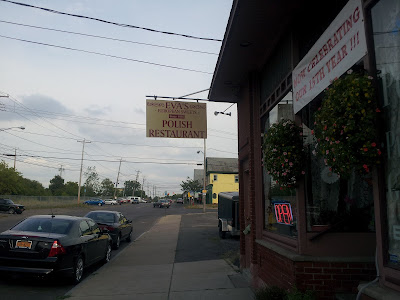 The place looks little from the outside but it was surprisingly larger inside. It goes back aways into the building. It was more than just sweets. It's a full Polish restaurant. Note to self: get my own Pierogi St. sign. 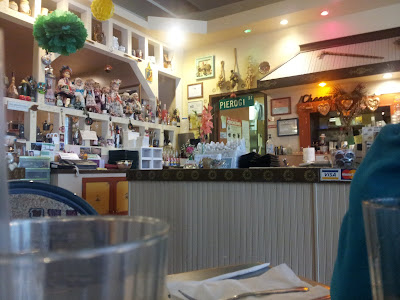 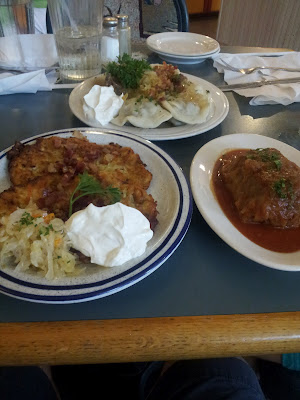 The kids got crepes filled with a sweetened farmer's cheese with some lemon, chocolate and raisins on top. What can I say, they were on vacation. And after having seen me take pictures of my order, they wanted this picture taken too. 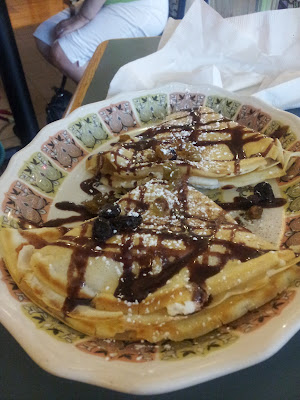 The sign out front says Eva's is celebrating its 15ht year. Looks like it will keep going strong. Good food and very friendly waitstaff will keep people coming back. We got there early, but the place had filled up and a small line was forming at 6:00 on a Thursday evening. If you find yourself a little north of the Fairgrounds, stop in and eat.

Looking for a quick dinner fix, I gave these a try. 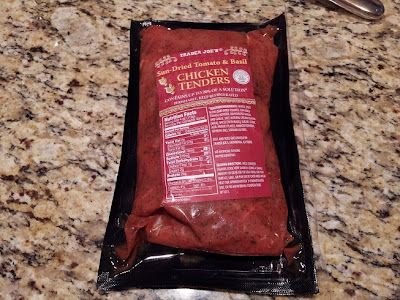 Not very good. I had my doubts/concerns when I bought the package but the desire for a quick dinner that produced a minimal amount of heat in the kitchen overrode them. Doubt this will find its way into my basket again. That cookie butter I read about and bought...strangely addicting. It's one of those Trader Joe's things that isn't great, but you just keep eating until it's gone. Those chocolate dipped dunker cookies aren't very good cookies. That won't stop me from eating a bucket of them though. Anyhow, I've got an idea for using that cookie butter. One of these days...
Posted by Jon in Albany at 12:08 AM 2 comments:

A few months ago I got a smartphone. I love playing with the thing. My recent fixation is a Ken-Ken puzzle app. The nerd in me finds them strangely addicting. I am constantly amazed at how powerful the phone is and how that technology can used. You can go from incredibly dumb things (like turning your phone into a virtual lighter, whip or mug of beer) to incredibly useful (like turning the phone's camera into a compass - strangely handy on construction sites). The apps that absolutely amaze me are the astronomy apps. Point the phone at a star and it tells you the name of the star and the constellation it's in. And the app that totally floors me every time is ISS Detector. This thing points you in the direction of the International Space Station as it flies overhead. Last night just before 10 I walked out onto the deck with the phone and waited for the space station to come flying over the house. Then there is was. A little ball of light flying across the sky. In about 5 minutes it was out of sight again. Some nights (depending on the path the space station is on) you can see it about every 2 hours. That's how fast the thing is going. So which is more impressive: There is currently a manned space station orbiting earth every 2 hours or the little magic box in my pocket that can point at it. Tough call. And kudo's NASA. That Mars rover landing kicked ass.
Posted by Jon in Albany at 12:16 AM No comments:

I walked over during lunch and made my first $50 donation to Trader Joe's. Parking looked crazy, a few aisles were jammed but checkout only took 10 minutes. nice inside. 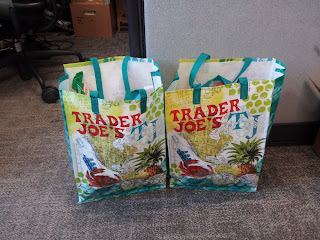 Posted by Jon in Albany at 2:04 PM No comments:

I haven't beeet but I've heard it's not too bad. Traffic is better than I thought it would be. This is the most cars I have ever seen in front of the Honey Baked Ham store. 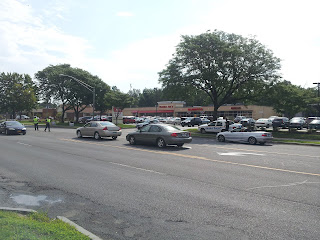 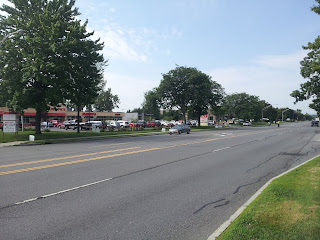 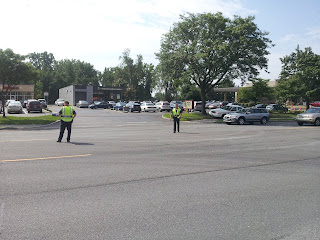