The sauce I use for my wood oven pizza has been evolving slowly over the years. I specify wood oven, because when I make Detroit style that is thicker than the wood oven pizza. The pizza sauce has gone from almost always being Pastene Kitchen Ready ground peeled tomatoes to various Stanislaus once I was able to get inside a Restaurant Depot. Stanislaus only make those really big #10 cans of tomatoes. But in their product line, I went from 7-11 which are a crushed tomato, to Tomato Magic which is the same as 7-11 except the tomatoes are peeled, to Alta Cucina which are whole peeled tomatoes in a packing liquid. With the crushed tomatoes, I sometimes used them right out of the can and sometimes I combined out of the can with some run through a food mill. I had been running these whole tomatoes through a food mill and including the packing liquid which is something I just assumed pizza places would do. Through all this, the sauce is just tomato and some sea salt. I like to add oregano on top of the cheese. As the cheese greases off a little and starts to boil, that oregano cooks into and seasons the pizza.

I saw an interview with Angelo Womack, he worked at Roberta's when it was just starting out and is now a pizza consultant, and in the interview he mentioned that if you were using the packing liquid from the can of Alta Cucina's the sauce wasn't everything that it could be. So the last time I made pizza, I used only the whole tomatoes and I liked the sauce. But was it really that different?

I had forgotten about wanting to look into this a little further and remembered when opening the can. I was trying to be a little scientific but was making it up as I went. I tired breaking down the can into parts. I'm using grams but they are really just ballpark numbers since there is some tomato left in the can, in bowls, on the food mill, on the counter...there will be rounding errors.

I ran all the whole tomatoes through the food mill using the coarse plate.

Pulp left behind in the food mill: 244 grams 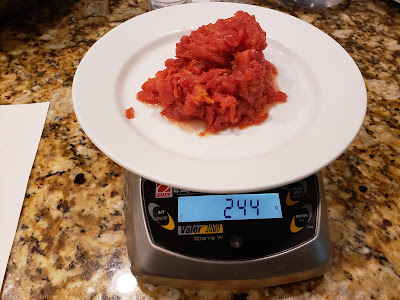 Packing liquid remaining in the can: 876 grams 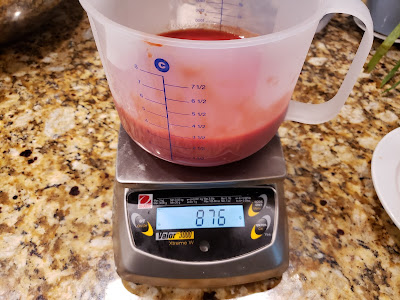 Tomato sauce that came through the mill: 1614 grams 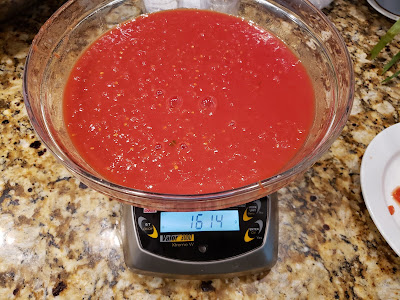 I made a blend of the milled tomatoes and the canning liquid to estimate what I'd have if I had just run the whole can through the food mill. I'm not sure this is the right way to estimate the proportions. If I had just pulsed a stick blender in the can, I'd have the pulp in there too. In any case, I made a blend of milled and liquid. There was no way around it, the canning liquid dulled the flavor of the sauce. I added some salt. It helped but not enough. I brought in my wife as a second taster. She agreed. The milled tomatoes by themselves were better. I'd argue that using just the milled tomatoes was like using a different ingredient.

Since I'm already a little nuts with the pizza, moving forward I plan to only use the milled tomatoes. That amount will get me through a typical wood oven bake with a little left over. Maybe I'll combine the leftover with the canning liquid to make a pasta sauce later in the week. For how often I fire up the oven and the cost of a can of Alta Cucina was under $5 the last time I bought a case, it isn't a big deal or really wasteful.

Where the experiment falls short: I didn't try comparing the two sauces on a pizza. Cooking could change it. I was just so surprised at how different the two sauces were and how much more I liked the milled tomatoes only, I used that sauce in the bake. Since it is just me making pizzas in a relatively small wood oven, side to side comparisons in the past haven't been true side by sides. The two pizzas would probably come out over 10 minutes apart, the oven conditions are constantly changing and it is generally difficult to create an "all other things being equal" kind of condition by myself in the backyard. This could also be less apparent in a more seasoned sauce. Also, if you are going for a sauce with a specific flavor profile, this might not help. I'm guessing most pizza shops either aren't milling the tomatoes (though some definitely do) and are using a combination of canned tomatoes. Maybe like 2 cans of crushed and 1 can of something thinner. When I took that class years ago at DeFazio's, they were using 2 different Stanislaus products with some water in a batch of sauce. There's more than just salt in their sauce too.

Overall, a very interesting taste test. Glad I remembered. It changed the way I will be making sauce moving forward. But the sauce is always evolving. The next change probably isn't too far off.