Typically, I am always surprised if anyone besides my mother reads what I write in this space. Twitter is a different beast. It is much more of an instant gratification medium. If you follow a local circle of people, you see their tweets to each other and you have the opportunity to chime in. And to make it even better, I have never met many of the people I talk to Twitter making it incredibly easy to essentially type your foot into your mouth.

Last Thursday, Daniel B. over at FUSSYlittleBLOG sent me a invitation to go out to dinner Saturday night. I was able to make it to the Northeast Dumpling House and had a very nice meal - Albany Jane wrote it up here.

Daniel was first to arrive and I was second. In our conversation, he mentioned that he was going to try to get to Pizza Town, USA on his way back to Princeton. He also mentioned that earlier in the day he had stopped by DC's Pizza to try a slice of their sausage pizza which was a runner up in the most recent Tournament of Pizza over at All Over Albany. Anyhow, on Monday morning, I was able to eavesdrop on this tweet:

24hrs later and I can still feel cheese and gravy coursing through my veins but so worth meeting up with @FUSSYlittleBLOG and @AlbanyEats!
— Chopsticks Optional (@chopsticksopt) January 27, 2014

@AlbanyEats Totally. I washed down my disco fries with a slice of pizza, a deep fried calzone and zeppole. Love Jersey. @chopsticksopt
— Daniel Berman (@FUSSYlittleBLOG) January 27, 2014


Well, now I had to chime in. After all, Daniel had just visited a place I recommended. So I wrote:


The conversation made me want to try DCs sausage pizza and it was lunchtime so I headed over to DC's on Western Ave and reported my experience to Daniel.


@FUSSYlittleBLOG No doubt that you ate the better slice at Pizza Town. The sausage at DCs was good, but I the pizza was pretty weak.
— Jon In Albany (@JonInAlbany) January 27, 2014

Alright, no doubt I'm being a pizza snob, but an honest snob. Here's the pizza a got at DC's slice of cheese and a slice of sausage. 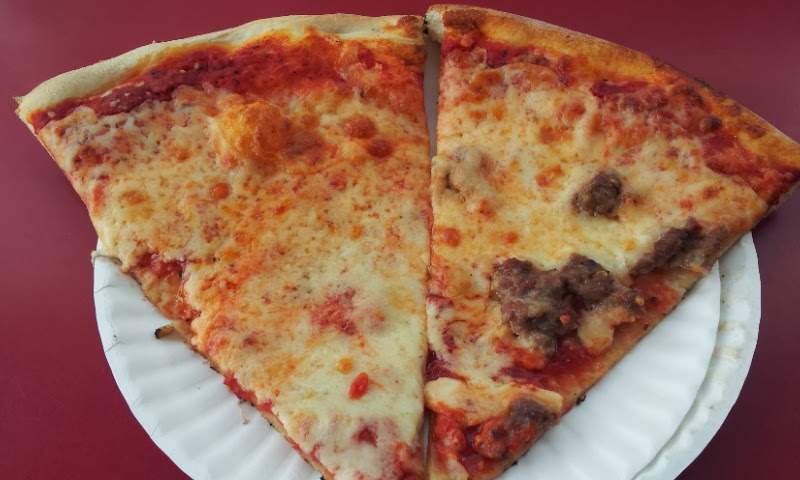 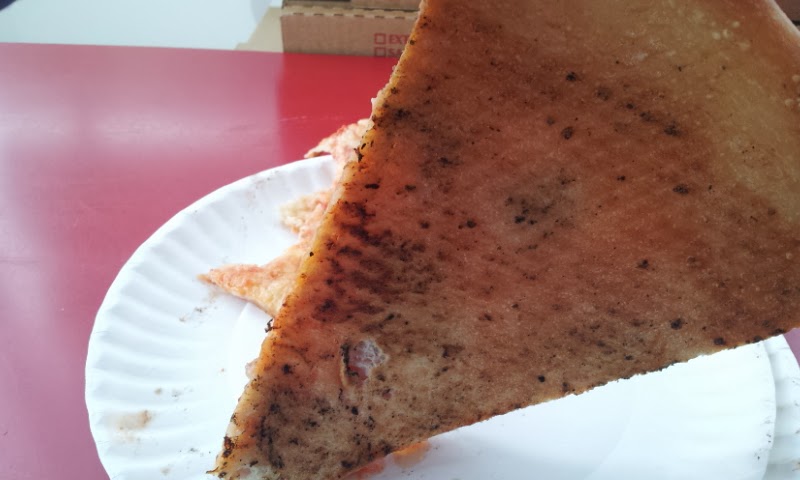 Maybe I got some off slices at DCs. The sausage was good and well seasoned, but I didn't like the crust. Well, more than didn't like the crust. I've never understood why places use pizza screens (see the grid pattern). These slices of pizza made me wonder what made the judges in the tournament of pizza give the sausage pie a 78 - probably among the 10 highest scores given out in several years of tournament judging. Although in an earlier 2013 tournament round the same pizza got a 66. Daniel and I went back and forth about the crust a few times and then...


@RidiculousFood @FUSSYlittleBLOG @JonInAlbany as far as the dough made every day sorry if you didn't like it but 25 years can't be wrong
— DC's Pizza (@DCsPizza) January 28, 2014

I got caught being a snob by the people I was criticizing. It was after midnight when I saw this tweet from DCs and I was tired and grumpy so I fired this off bit of snark.


@DCsPizza I hope you do well but your pizza isn't for me. And 25+ years doesn't equal right. #Dominos @RidiculousFood @FUSSYlittleBLOG
— Jon In Albany (@JonInAlbany) January 28, 2014

I regretted it when I woke up in the morning. DC's pizza is better than Domino's and the comment wasn't intended as a comparison. I just meant that just because something has been around for a long time, doesn't make it good. But whoever runs DCs Twitter account is all class.

We went back and forth a few more times and it ended with me offering to have DC pizza over sometime after I learn how to use the wood fired oven I'm planning for the back yard. Now I've got to get some pizza making skills to back up my trash talk. And Albany Jane is invited over too.

We've been living in our new-to-us house since early October. After we got everything out of the old place, we had the floors redone, I prettied up the basement and then we put it on the market. When we originally went to contract to buy the house back in late 1999, the house went on the market on a Thursday. We signed contracts that Sunday. The real estate market was insane then.

The house got listed on a Friday afternoon. On Saturday around 2:00 in the afternoon, we accepted an offer. Even faster then when we bought it. As much as it was a relief to sell the house and know we we heading back to a single mortgage payment, that afternoon was my first real feelings of sadness about leaving that house. It's a damn fine house. Like any house, it had its projects but I enjoyed calling it home. And the neighborhood was great.

There used to be a huge pine tree in the middle of the front yard. It had some kind of blight and was starting to die from the bottom up. After the tree was removed, we ended up ripping the entire front yard apart. Dug out the stump with a tractor, made the dry well for the sump huge, roto-tilled in the entire front and side yard, raked out sod clumps, spread out 10 yards of topsoil and then re-seeded the lawn. It was quite a weekend. Another weekend, there was scaffolding across the front of the house while we replaced the soffits. They were wood and in desparate need of painting. Instead of painting, we vented them and covered it all up with vinyl...since vinyl is final. 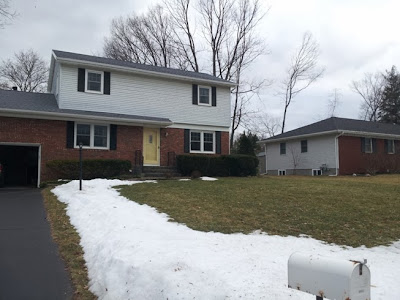 Then there's the deck we took down and replaced. It came out pretty nicely. 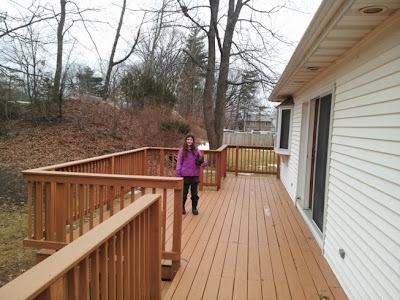 This was our formal living room. We never used it as a living room. It was empty, then filled with kid stuff. Once a year, it was cleared out, a big table was set up and that's where we had the first Thanksgiving I ever cooked...and then next 11 Thanksgivings too. The 12th Thanksgiving had pretty much the same setup and menu, but it was at our new place. 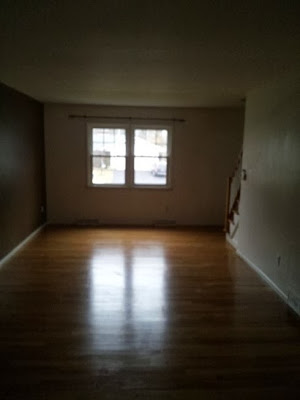 The first big home improvement project I took on by myself was the kitchen. The original kitchen had a tile counter top that needed to go. The granite counter tops were contracted out, but the backsplash removal, sheetrock repair and re-tiling was all me. 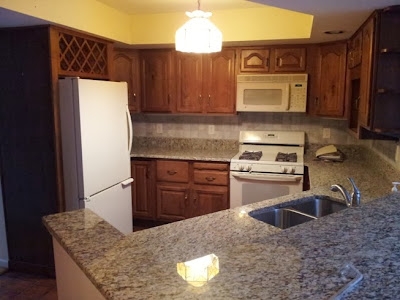 This entertainment center came with the house. For awhile, it was our only piece of furniture. 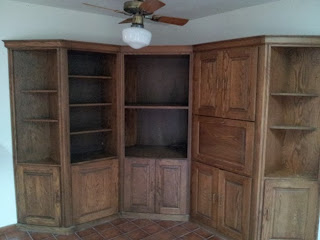 We had our computer set up on a desk in here. It was at this desk, I discovered "blogs" about 5 years after everyone else. 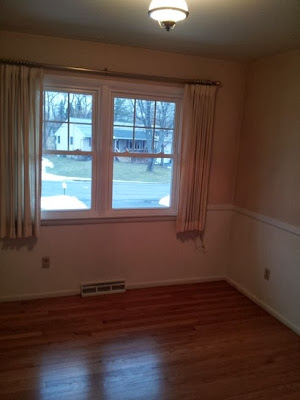 Here's a special room. When we brought our first daughter home from the hospital, this was her room. We originally used it as a huge walk-in closet - that's the kind of stuff people without kids do. All the windows in the house got replaced during that pregnancy. Most of the replacement windows upstairs were the same size. In replacing a window in a different room, there was an little extra shove and....the replacement window fell out leaving a trail of caulk down the side of a big shrub on its way to cracking on the ground. We ordered a replacement replacement window and the window on the left of the next picture was the last window in the house to get replaced. During the early stages of labor, the molding for that window was primed and installed so the room would be finished when we came home with a baby. That's some serious last minute power-nesting. 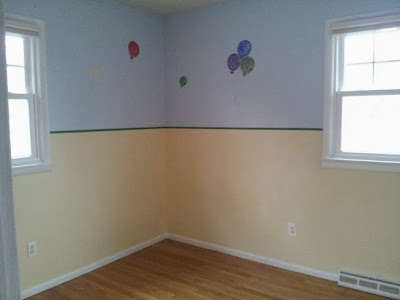 My second daughter's bedroom. The crib went in this corner. She wanted to take the painted animals to the new house. 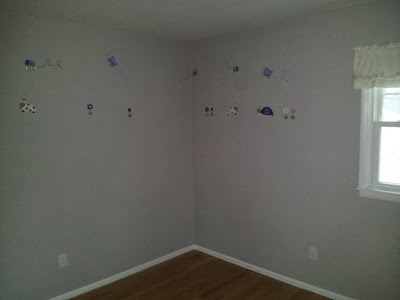 Here's the last room we redid. It had wallpaper. Thick, ugly wall paper. The new house has no wall paper. 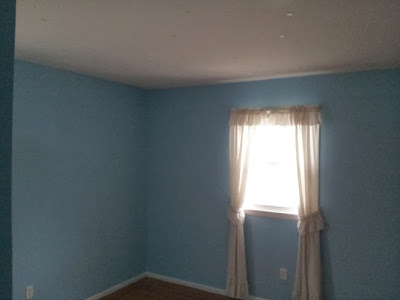 We grabbed the last of our stuff out of the house today. A few lamps and a couple of door mats. As we were leaving the future owners stopped by to do their walk though. They seemed very nice. They have a baby girl. If the banks can sort it out, tomorrow afternoon it will be their house.

On the way out, the girls wanted to sell Girl Scout cookies to some of our old neighbors. Good business...keep your territory and maintain the established customer base. And it was nice to go around and talk to familiar faces. We had gone around our new neighborhood selling cookies earlier in the day. At one house we were asked, "Do you live around here?" 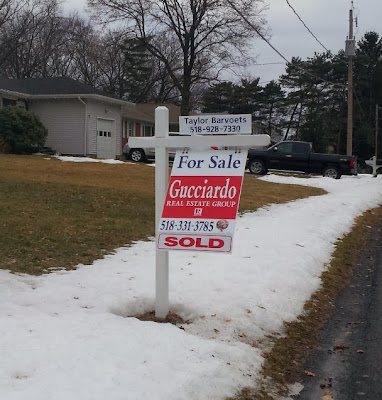 Over the past few weeks, there has been some pizza news out of New York City. Paulie Gee is a guy that started with a backyard pizza oven and a job he hated. He quit the job and opened a pizzeria in Greenpoint, Brooklyn. The place is always packed and it makes a lot of lists of "must go to" pizzerias.

Recently Eater and Slice have had stories about expansion. I have been following the outside Baltimore location's progress since we visit that area annually. Sadly it might be easier to get to a Baltimore outpost than the closer Brooklyn location which is 165 miles from my house (can you tell I've checked?).

Paulie Gee is helping other pizza enthusiasts open their own shrines to pizza described as "A Brotherhood of Pizza Enthusiasts." How cool is that? Well, I'll tell you: It's. Too. Fucking. Cool.

Earlier tonight Paulie tweeted out the question, "Who wants to be me in Seattle?"

Another time, with kids not in elementary school, without having just moved into a new house, more confidence in my pizza skills...basically a few less excuses, I think I would raise my hand.
Posted by Jon in Albany at 12:57 AM No comments: