Happy Trails, All Over Albany

Earlier this week, the sad news came out that the website All Over Albany would stop putting up new content at the end of the year. I’d say I pop on to their website somewhere between 4 and 6 times a week to check in and see what’s going on in town. I expect I’ll probably just keep automatically clicking on the bookmark for a while.

I have no idea how Greg or Mary from All Over Albany stumbled onto my blog and started including it in their weekly “What’s Up in the Neighborhood” round up. I’m not even sure how long ago it was. But ever since then, I have thoroughly enjoyed being a part of the All Over Albany extended family. What a great group of people.

As my blog posts shifted from barbecue toward cured/smoked meats and then settling into the current pizza obsession, All Over Albany kept tabs on my general insanity. At some point (I think it might have been after I made up a betting point spread and over/under line for The Tournament of Pizza final round), I had droned on enough about pizza that I was invited to be a judge in the final Tournament of Pizza. Would you believe I almost turned down the offer? No joke. Politely declining the offer was something I considered and there was a drafted in an email explaining why. I mean, how colossally stupid would that have been?

The reason my irrational brain came up with to pass on The Tournament was because a daydream I had. One year The Tournament had a mystery entry. The mystery entry in each bracket turned out to be a chain pizza. The daydream was to compete as a mystery entry and run the table. I wanted to win The Tournament of Pizza. As someone that would have been a judge, it felt like a conflict of interest to jump over into the competition side of The Tournament. That’s how into their Tournament of Pizza my pizza obsessed brain got. I worked myself up into a bizarre ethical conflict that most likely didn’t exist. In a very long winded email (that I still have), I explained why I was conflicted by outlining the whole daydream to Mary. “The plan is that in 2016 or 17, I’m going to ask you and Greg if I could compete as a ‘Mystery’ entrant” is something I wrote to someone I didn’t really know very well. Mary, who was probably thinking, “Oh no, what did we get ourselves into?” talked me down by telling might be the last Tournament and she couldn’t see why judging one year would knock me out of any possible future competitions. Deep down I must have known the conflict of interest thing was stupid. With a future title still a possibility for me, I joined the judging panel and had a blast. Eating pizza and hyper analyzing it with other people who are crazy enough to hyper analyze pizza is just the best.

After The Tournament, I was invited to other events and projects Greg and Mary organized for All Over Albany. Many of the emails leading up to these events are about getting the gang back together for something. A mini pizza tour. I wrote about raising some cattle (an essay that Greg edited into one of the best things I’ve written). A burger tour. The AOA birthday parties. A pizza party in my garage (which I want to host again now that I’m cooking in the wood oven). A recent ice cream tasting.

There was also an annual end of year end request asking several people to briefly write about the best thing they ate this year. Greg’s specific instruction was to not spend a lot of time on it. Well, I take my All Over Albany assignments seriously so it was in the back of mind all year. “Wow, that’s good. Is it worthy of the best thing I ate all year? I don’t know. I’ll file it as a maybe.” I’m not sure if they will do the annual column next week, but I have my 2018 pick ready to go if they do.

Being part of the All Over Albany community was an honor. One I will no doubt miss. Instead of getting sad that there will no longer be an All Over Albany with its unique coverage of local politics, stories, maps, Snowpocolypse winter storm ratings, and seasonal moment photos, we should look forward to whatever Greg and Mary do next. Doesn’t matter if it is together, each on their own or Albany even based. Whatever project they work on next is going to be great. No doubt in my mind. Best of luck for a wonderful 2019, Greg and Mary.

And let’s get the gang back together for a pizza party. My house. Got a few new topping combinations I want the gang to try.
Posted by Jon in Albany at 6:13 PM No comments:

Even More Pizza On The Road

The Eat All the Pizza in Batavia mission continued last week and unfortunately, there are no shining stars to report on this week….sigh. But these bad experiences make the good experiences even better. This trip I wanted to hit Marks and Main Street Pizza.

First up was Mark’s. I skipped lunch and pulled up to Mark’s on the way to the hotel. Turns out Mark’s is a regional chain. Twenty five locations. 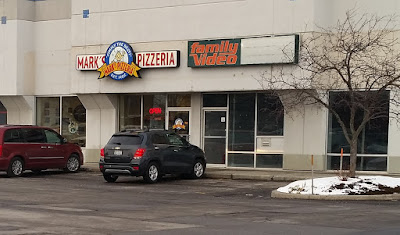 I ordered a pepperoni pizza. They are cooking on screens in an air impingement oven (conveyor deck). It looked like the oven was set at 460 degrees. I timed the bake of my pizza at just under 10 minutes. I think the people behind the counter took my watching them as impatience, but I was just trying to see anything that was going on behind the scenes. I can say, there was a college age guy making subs and if he continues to cut sub rolls that way (holding the bread while making large, fast slices with a bread knife aimed at his hand), he will be getting stitches at some point in the not too distant future. I watched the dough being stretched. Instead of an edge stretch where the rim of the crust is formed early in the dough stretching, the dough was stretched and then the rim was kind of crimped. In the end, it looked normal. 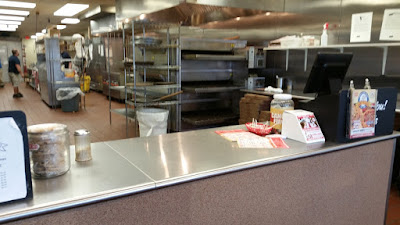 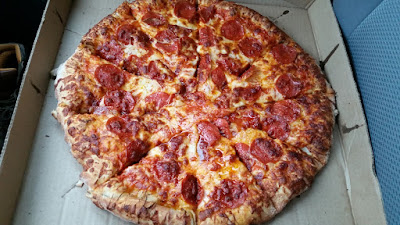 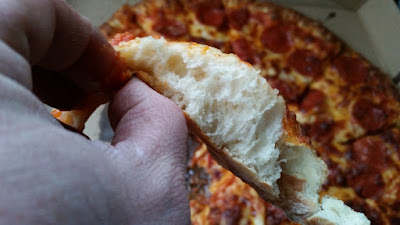 The crust was light, airy and the crisp bottom had a little coating of uncooked bench flour (bottom picture came out blurry). The crust was also completely flavorless. It made me think of some cheese bread/sticks I've seen on the pizza forum. The sauce wasn’t very good and there was too much of it. The cheese and pepperoni slide. The cheese was also a bit watery. The pepperoni was your standard, nothing special flat pepperoni. The pizza did get a little bit better with age. As everything cooled to room temperature, the toppings and cheese stopped sliding but this was not good pizza. Recently, a different location of Mark’s was recently reviewed by SexySlices – an Instagram reviewer on a mission to review a different Buffalo Style pizza place each week. They gave Mark’s a solid B. If this is an above average example of Buffalo Style pizza, I might be done trying to look into the style.

But wait, it gets worse. So much worse.

For dinner, I met my friend Kevin (from heaven) and we headed out to Main Street Pizza Company. 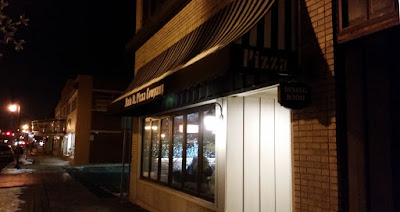 We went over the menu and decided to try a small pepperoni pizza and one of their grilled pizzas too. I’m reluctant to beat up the restaurant too badly. Service was very friendly. It was nice inside. They had an inexpensive house wine. The menu was diverse. They were running a tripe special. But the pizza…I hated everything about the regular pizza. 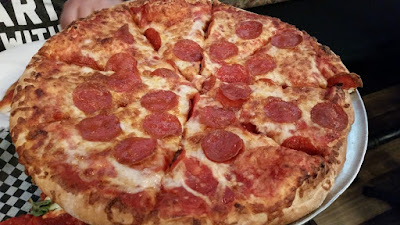 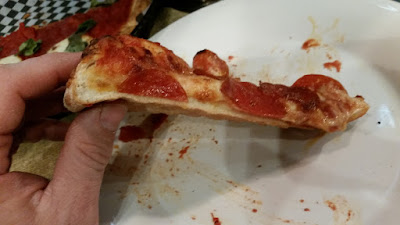 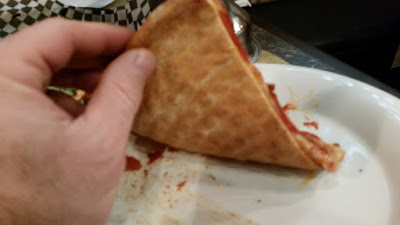 The regular pizza was cooked on a screen in what I would guess is conveyor belt oven similar to Mark’s and the appearance of the pizza was also very similar to Mark’s. The crust…I think you might be able to do better with a Boboli shell from a supermarket. The sauce was painfully sweet. Just thick tomato fortified with a shit-ton of sugar. We each only had one slice of the regular pizza. Neither one of us wanted another. I got the leftovers to go trying to be polite but those two slices were all that got eaten.

The grilled pizza had the same dough rolled thin, way too much the same sauce, a few sad pieces of rubbery fresh mozzarella and some roughly torn basil leaves. C’mon, that’s a sad looking pizza, right? 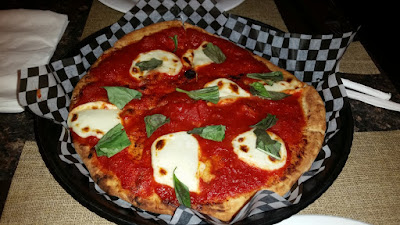 That grilled blob was $11.95. Kevin asked, "Is this going to be featured on the world famous Jon In Albany Blog?" Yes, Kevin. It is. 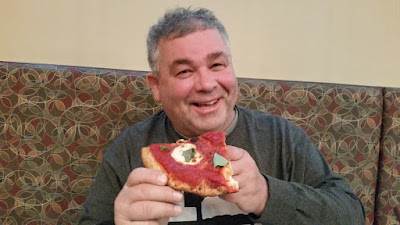 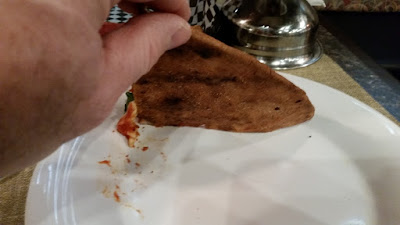 I ate one slice, Kevin had 2 of the grilled, more I think because he was a little hungry than the quality of the pizza. People seemed to like the Chicago Deep Dish there. We saw one as we left. It looked like the same pizza with the dough in a different shape. If I were ever to make it back to Main Street Pizza, I’d try some of the other things they had on the menu that looked like they could be interesting but I’d stay away from the menu items that had pizza dough. They had calzones and "subzonis" which sound kind of stromboli-ish.

After dinner, Kevin and I headed next door to the Eli Fish Brewing Company. It’s a really nice space with 20 beers on tap. If they weren’t brewed there, they were brewed somewhere else in New York. We talked with someone that works in the kitchen at a place called O’Leary’s that is just around the corner. Sounded like a nice restaurant. Maybe I can get to O’Leary’s next time. There is only 1 more pizza place to visit and then I will be able to compile my Batavia Pizza Power Rankings. I'm not optimistic about the last place. People at Eli Fish made "why would you go there?" faces when I mentioned it, but a mission is a mission. I'm going.
Posted by Jon in Albany at 6:48 PM No comments: