Home Made Bitters and Softball

Hi, Mom. No hidden message this time. Just a cryptic, super-secret code no one but you will will be able to decipher:

The vinegar is in the mail.

Homemade bitters is the answer to my Jean's Green's question. The goal is a mostly homemade Old Fashioned. I might try to turn some frozen cherries into my cocktail garnish too. To make the bitters, am am mostly following the recipe from The Tasting Table. I'm only making half a batch. The hardest part of the recipe besides fining the gentian root was getting the orange rinds. I wanted the be able to make thin slices so I didn't want to use the microplane I normally use for anything zest, I have a fruit zester somewhere. It wasn't in the drawer I thought it was in. The last time I used it was before I had a microplane and we lived in a different house. The little zester may be missing in action. I ended up using a sharp knife. It took some time, but my fingers smelled like orange and no stiches were needed. I put as much orange peel as I thought I needed for dried orange and put them in a low oven to dry out. The convection feature helped that along.

I got everything together and measured out what I needed. 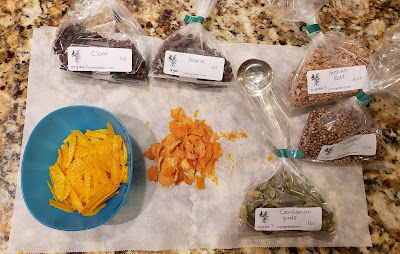 Everything went into a mason jar with some booze. Probably not the best idea, but I used a combination of things so this exact recipe will never be duplicated. I added a splash of not made in Kentucky bourbon, some locally distilled Oligan "moonshine" and some vodka. 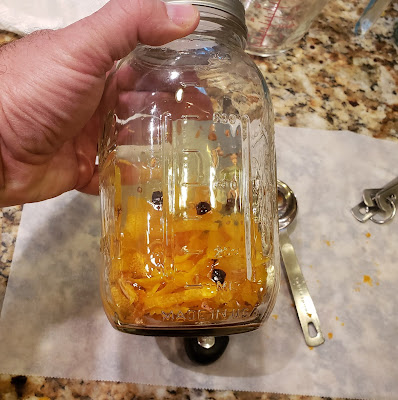 Also, this could be me being a little nuts, but I don't want a typical mason jar lid to be in contact with high proof alcohol. I envision the alcohol vapor melting whatever seals those lids during the canning process. I cut a circle out of a sheet of PFTE. From what I've read, this is better. Years ago, I tried making homemade lemoncello out of grain alcohol. I used a water bath to speed up the lemon extraction and that worked really well. I diluted it with a simple syrup but I don't think any amount of tinkering is going to make Everclear grain alcohol sippable. Anyhow, a jar of this sat in the basement forever and when I finally tossed it, the lid looked a little used. Maybe the key is not to use one of these lids with alcohol for several years. In ay event, I don't expect any issues with my new lid.

There was a softball tournament this week. When I left the house on Sunday morning. I think it was 35 degrees. Not exactly softball weather. My daughter is on a new team this year. I like the coaches. I like the parents I've met. The players look like they have fun. Really, there's nothing like a tournament to remind you how non-competitive I am with sports.

There are some coaches that are constantly borderline cheating to gain an advantage, drill sergeants that think they are in charge of an army. I've seen coaches wave their arms like a ball was hit fair when everyone there including the umpires saw it land 10 feet foul. This guy actually said, "I had to try," when everyone was looking at him funny. No bud, you didn't. This weekend there was a play where our team was in the field. Ball comes in from the outfield and the other team has a runner just about at second base. The coach is yelling "Home! Home! Home!" at our defense. I think he was trying to get someone to throw the ball to home plate to advance his runner one base. It's the only thing I can think of that he was doing. What he really did was make a dozen people think he is a moron. I cannot imagine living a life where advancing a runner one base in a pretty meaningless tournament meant that much to me. Some of these guys will basically do a dance to give the batters and base runner a signal. You know what nice coaches do? There are a number of signal systems that can be explained in about 10 seconds. They use one of those. At one point this weekend, one of these dancing signal coaches very loudly and in a way everyone there could hear told his batter, "The pitcher just threw 4 balls in a row." He was trying to get into a teenager pitcher's head to knock her off her game. The batter took the next pitch, which was a strike. Serves the POS right. There was one time, the same guy called for a bunt with runners on 1st and 2nd. The batter bunted the ball but did it in a way that the ball hit her and she was called out. I actually heard this guy congratulate himself on a great play call, that failed. Anyhow, it is seeing that kind of coach that makes me thankful my daughter has never been on that kind of team or had that kind of coach.

The tournament was in Bethlehem and before the weekend, some serious COVID restrictions  and protocols were sent out. Mask on when you leave your car, no shared equipment, no team water cooler, no shared food (often at these tournaments, parents get together and there are basically full team tailgates - none of that), two spectators per athlete and they should be parents/guardians...the list went on for a while. It was 2 pages.

For the most part, people followed the rules. The people who seemed to be breaking the mask rules were the Umpires. There was one umpire that would actually lower his mask to talk to someone and then put it back on when he walked away. I have found there are two kinds of softball umpires. Some umps (all female umps with one exception - she means well but is just an awful ump, if I understand the infield fly rule better than you, umping isn't your gig - and some guys) are there because they love the game and enjoy being a part of it. And there men who are probably miserable to be around most of the time and enjoy the power trip of being in charge of something. You'll never guess which ones followed the mask protocols. 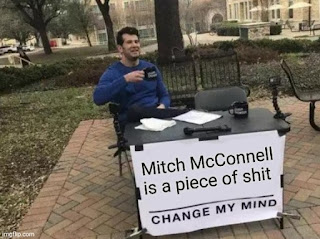 Every so often, I get into a good cocktail conversation. It's probably not that common because I am mostly a "pour it in the glass and drink it" kind of guy. Not that long ago, I was having a conversation and it gave me the inspiration for yet another completely unnecessary project. So I started looking into it. A google search here and there, a little more reading and it looked doable but one herb needed to be bought online. I figured we've got the Honest Weight CoOp. They'll have it.

So, it took a few weeks for me to finally get over there. I stocked up on a few things I needed (they've got a bulk chili powder that I like a lot for your rubs and other chili powder related needs). But I couldn't find what I was looking for in the bulk spices and figured I give the vitamins/supplement/essences section a look. I didn't see it there so I asked the person stocking shelves. Was happy to find out she at least had heard of what I was looking to find.

There was a brief pause as she mentally went through her inventory and she told me they didn't have it, but Jean's Greens probably would. I thanked her and continued shopping my way through the CoOp.

Honestly, I spent the rest of my visit looking at things that could be possible pizza toppings. I have gotten awful in a store. I did find that Honest Weight carries Miyokos vegan mozzarella which to date is the only vegan "cheese" I have liked on a pizza. Vegan mom (hi Mom) and vegan neighbor agree. In fact the vegan neighbor made a point to ask me what brand it was and her husband once said, "Don't tell her I liked it or she'll make me go vegan too."

Eventually I made it out of the store and back to the car. I looked up Jean's Greens and found it to be a spice shop in West Sand Lake. Been there for 25 years. How have I not heard of this place? The website makes it look like the kind of shop I would have loved to have roamed just a short lifetime ago. You can place orders online or by phone and they ship, or you can pick up and they will bring it outside to you. Super friendly people at Jean's. There are some other odds and ends mixed into the order, but most of my stupid project ingredients are here.

Really looking forward to seeing how it turns out. Any guesses? I'll give you a hint (no google cheating): Gentian Root is the item not carried by the CoOp. They'd have a version of everything else here. 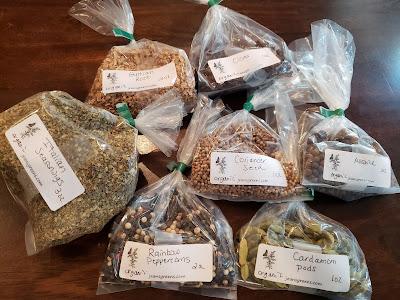 Posted by Jon in Albany at 5:16 PM No comments: