The pizza challenge was to use some kind of green pepper. Any kind.

The first pizza combo that came to mind was one I hadn't made in a while. So one Friday night I made dough thinking that I might get a chance on Sunday. Plans changed and Sunday was out. Oh well. Figured I'd make bread or stromboli with most of the dough. Some might get wasted. No big deal really. It is a little bit of a waste of flour, but not much. On Monday, I came up with an idea. I'm working from home. I could walk out, start a fire and be back at the laptop in a few minutes. Pop out once in a while to toss a log in the oven. Easy peasy.

Well, it turns out prepping the pizza toppings after work is a little bit of a rushed hassle. But what really through me off my game and turned this impromptu bake into an exercise in frustration was nature. More specifically, bugs.

I didn't notice anything during my quick oven visit to light the fire. It turns out carpenter bees have been drilling holes in my roof. There was some kind of ant with wings and I think a hornet was acting like a real estate agent checking out a spot for a nest. And in the back corner of the roof, I could heard a repeated clicking. I think it was carpenter ants eating. So, for the entire bake I was thinking I was going to have to take down a lot of the roof (which was a serious pain in the ass to build) and this threw me off my game. The dough didn't feel right. The stretches weren't right. The launches weren't right (I made a lot of ovals that night).

Yes, I know that a slice of pizza cut from an oval will still taste good. In my online Twitter complaints I was reminded of a Todd English quote: never trust a round pizza. But it was frustrating, I wasn't having fun. Instead I was getting kind of pissed. There were two high points of the bake. The first was trying out a new vegan pizza, a puttanesca. That had sauce, garlic, oregano, crushed red pepper flakes, Kalamata olives, capers and an olive oil drizzle. A light sprinkle of pecorino might be nice or maybe some anchovy, but those would take away the vegan status. Next go around, I'd replace the crushed red pepper flakes and olive oil with a chili oil. Overall, this was still a tasty pizza and it will find its way into a regular rotation. My vegan neighbor liked it too.

The second high point was the pizza challenge pizza. The is a TXCraig1 special. Mozzarella cheese (used both fresh and low moisture), sausage, dried cranberries that have been rehydrated in rum and jalapeno with a hot honey drizzle post bake. This was the roundest pie of the night. Still not quite round, but the dough stretching was not firing on all cylinders. 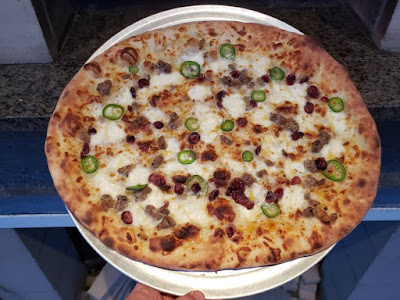 Not only is this a tasty pizza, but the chef gets a nice glass of cranberry infused rum after everything is all cleaned up. I needed it that Monday. Called an exterminator on Tuesday.

There's a pizza guy I stumbled across on Instagram. He has a youtube channel and sometimes I check out what he's doing there. It's mainly a more in depth look at what he does on Instagram. He goes by SantaBarabaraBaker and he makes some really nice looking pizzas.

When I first started watching him he was using a pizza steel in his kitchen. He has since moved up to an outdoor, propane Ooni oven. I think he has the Koda 16 model. Would you believe his name is also pretty close to mine? It's Jonathon. His overall enthusiasm for pizza is contagious.

Well, one of his Instagram posts mentioned that he had been interviewed for a podcast titled "What's Good Dough?" which, if you are into podcasts, is available everywhere. Over the past 2 two days, I was able to sneak in listening to the podcast while walking the dog.

In June 2018, we had a birthday party for my daughter. In my mind, those were the best pizzas I have ever made. Everything clicked. The dough was just right, I was giving them just the right amount of time at room temperature before stretching. The sauce was great. Stretching was a breeze. Launching the pizzas in the oven was smooth, all clean launches, nothing stuck. And the flavor, it was the best crust I ever made

Since June of 2018, I have tried to replicate that crust. I've come close. And even if everything were exactly the same, I'm not sure I would believe it was. The day and the event may have elevated those pies in my mind to better than they actually were. But that particular bake, even though duplicating it is unobtainable, that's the bake I chase every time.

Because pizza is fleeting.

Running a little late here. Wasn't sure what I was going to do for this, had some yardwork projects going on (trying to grow grass but I think I am mainly giving grass seed to birds), not sure about a the timing of a wood oven bake...anyhow, managed to do the challenge just under the wire for dinner on April 30th. Seems fitting to be posting about it a week into May.

The Challenge: Celebration! Add an ingredient that elevates your pizza to something for a special occasion.

Wasn't quite sure what to do. I've been seeing a lot of different, fancier cured meats on pizza and remembered a mortadella-pistachio combination I saw for a Neapolitan pizza some time ago. A little google search and I was able to track down the pizza I was trying to remember from Serious Eats.

Took a break from re-watching Letterkenny to make some dough Thursday night. Had the kids take the panned dough out of the fridge when they got home from school to give it a chance to warm up a bit. Heated up the oven and prepped some toppings and we were off..

The Celebration pie was mortadella under the cheese with crushed pistachio/olive oil stripes. If I make this again, I think I'd try it with a light brushing of dijon mustard under the mortadella. All in all, it was pretty tasty. 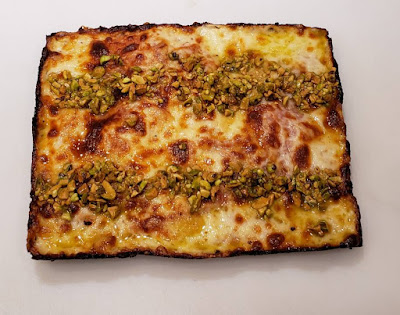 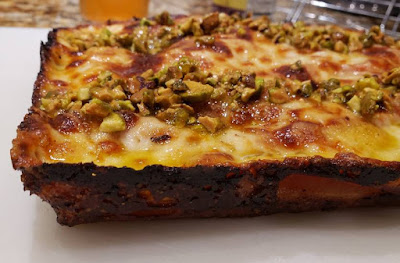 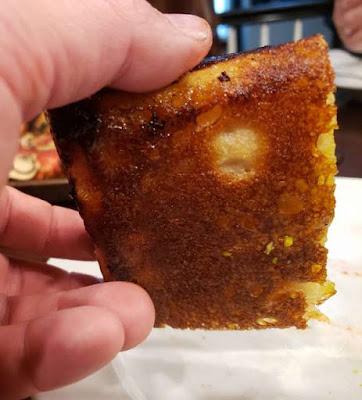 I have 4 of this size pan, so I figured since I got to pick one topping, everyone else could pick how they wanted one topped. We had bacon, olive and a mushroom too. 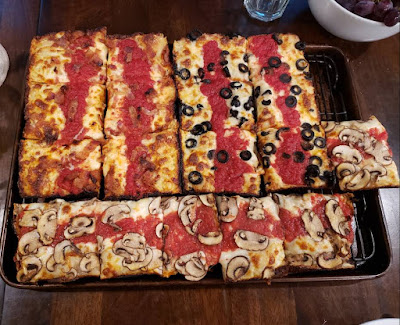 You could do much worse for dinner on a Friday night. On to planning the May Challenge.