On a work trip at the end of May, I pulled over and took a picture of this barn. It's on Telephone Road (Rt 20) in Caledonia, NY. I'd driven past it a few times before and I'm glad I stopped because I don't think I'll be heading out that way again. Anyhow, the barn door always made me smile. 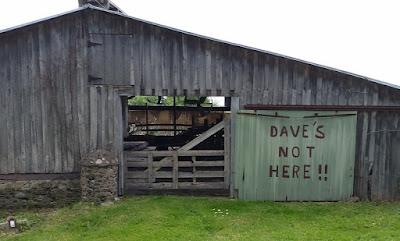 Posted by Jon in Albany at 7:28 PM No comments:

Whenever I get something in a store that gets weighed, I always pay attention to the scale. I'm not sure why. For the most part, the accuracy of what I'm buying doesn't really matter. I guess I'm watching to see how good a feel for weigh the person behind the counter has. The guy that butchers our steers is amazingly accurate when packing ground beef. A lot of people behind the counter are really good. I suppose I'm just curious to see how close the initial guess is.

Recently, I had asked for about a third of a pound Percorino in an Italian market. Before I could say 0.27 was close enough, a little more was added to the scale. Now it was over 0.33 pounds. A pair of anxious eyes looked at me for a thumbs up or down. I said, "I'm not fighting you over a couple hundredths of a pound." His response: "You'd be surprised."

Yesterday, I picked up some sausage at Hannaford. I had never seen this particular name before. It was Parillo out of Saratoga. I figured I'd give it a shot. I actually prefer bulk sausage like this if I'm not grilling it. I asked for a pound and had a nice conversation about the sausage with the person getting it for me (he likes it and some other Parillo products too). He put the sausage on the scale: 0.98 pounds.

Me: "Damn. That's pretty good."
Him: "Would you like me to top that off for the full pound."
Me: "Within two hundredths is close enough."
Him (while kind of rolling his eyes): "You'd be surprised."

There are people walking among us that apparently berate the staff at deli and butcher counters about hundredths of pounds. These people have thrown enough tantrums over grams of cold cuts and ground beef that the market employees are afraid to be off a tiny amount on anything weighed.

To these people I say: stop it.