Ever since first eating a bowl of Pho, I have wanted to try and make it with bones/meat from our steers. Step 1, and probably the most important step is the broth. I pulled four of what our butcher calls "soup shanks" because from his experience, that's all they are good for. I have made some good beef stock with them in the past. The meaty part of the shank contributed flavor and even tenderized a little but they were never very good eating. My hope was that would change with the pressure cooker. Here are the shanks. 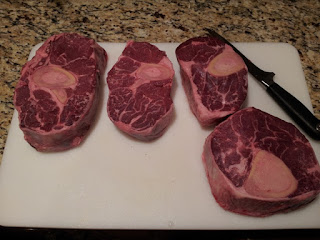 They cut up into more manageable pieces pretty easily. If I remember correctly, I had about a pound and a half of bones and just under 3 pounds of very tough beef. 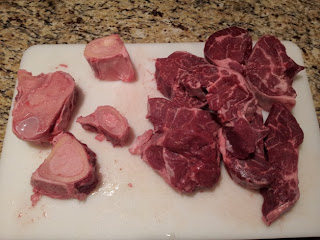 Loosely following Andrea Nguyen's recipe, I got a large onion and a good hunk of ginger. Andrea (I was kind of following her recipe so clearly we are on a first name basis) has a new tofu cookbook out that looks pretty interesting. 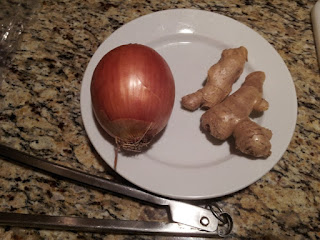 The onion and ginger get charred. Instead of setting off the smoke detector, I fired up the grill. You can kind of see the onion blistering on the left and two pieces of ginger in the middle and right. 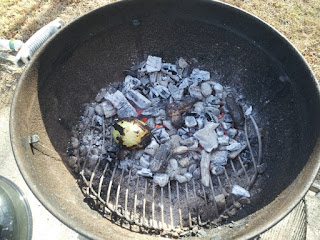 Here are the charred onion and ginger getting ready to go into the pot with star anise and a cinnamon stick. With 20/20 hindsight, the charring of the onion would go better next time. The outside got charred and about half of the inside softened. Id' use a lower heat and more time to soften the core of the onion too. Lesson learned. 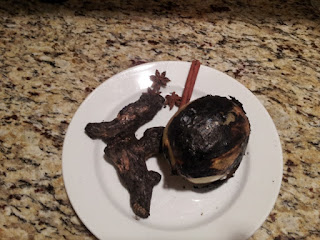 I took the char off the ginger and onion then it all went into the pressure cooker for about 90 minutes. 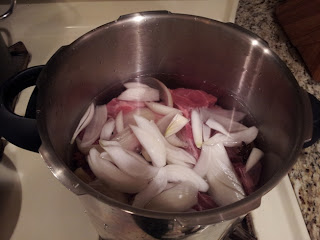 Here it is strained and on its way to the fridge. It tasted good but was missing something. I think adding the fish sauce will bring a lot to the flavor. It was also a little greasy. A lot of fat is going to gel up when this is cool. 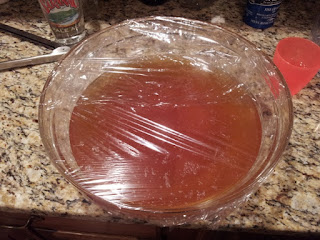 As predicted, there was quite a bit of fat. The bones had a good amount of marrow and that melted into the broth. At least I'm guessing that's where the fat came from. I tried the beef today too. It's edible, but I wouldn't put it in the pho. I'll pick at it for lunch. 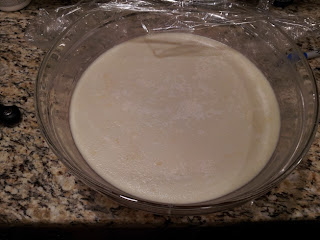 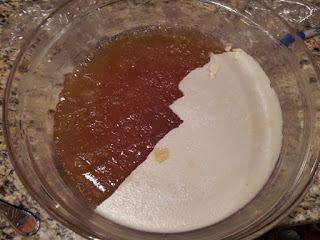 If I don't get a chance to make the pho on Saturday, I'll freeze the broth for another time.
Posted by Jon in Albany at 12:58 PM