A modern take on Mac and Cheese

Gave the sodium citrate a whirl earlier tonight with pretty good results. A work in progress and an idea I think is worth pursuing.  Here's a link to the MDRN KTCHN video about sodium citrate.

My daughter Allison's favorite Mac & Cheese recipe comes form a New York Times food section recipe and I use Cabot Seriously Sharp in it so that's what went with today. I grated the brick of cheese and weighed it. The recipe is based on percentages so I calculated the appropriate amount of sodium citrate (4% of the weight of the cheese - I figure it isn't a trade secret the recipe is here) and weighed that out. 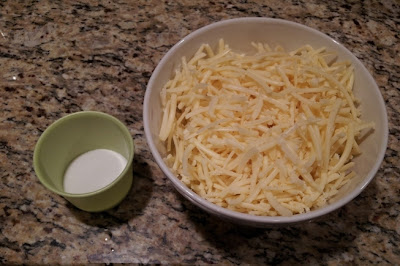 Next, I got the scaled amount of water (93% of the weight of the cheese) in a pan and heated it up. Added the salt and gave a stir to dissolve. I added small amounts of cheese to the simmering salt water and whirred a stick blender around. Once the cheese seemed to be liquified, I added another pinch of shredded cheddar. More whirring. At first, the sauce looked very watery and I thought there was no way it would thicken. But about halfway through the cheese, it started to look like sauce. And when I was done, I couldn't believe how smooth the sauce was. 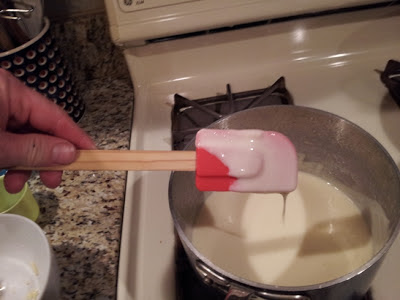 I couldn't swipe a line on the spatula, lick my finger clean, then swipe my finger on my phone fast enough to get that classic picture where you use your finger to make a line on the back of the spoon (I think it is called nappe, but I'm not sure). I tried twice and then gave up. It was dinner time and four other things were going on...but the picture was there for me to take.  I boiled some elbow noodles and tossed them in the sauce. Dinner is served. 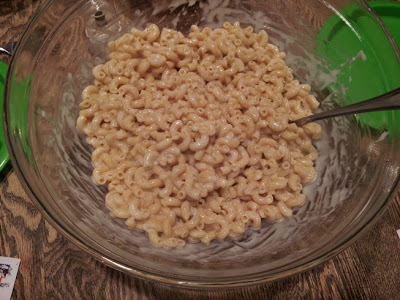 I thought it came out pretty good. Cooked in this method, I think I would choose a different cheese next time. And that's the work in progress part. The texture of the cheese sauce is great but the flavor would be better with a different cheese. The method lookis like it will take any cheese and turn it into a smooth sauce.The cookbook has a longer, baked mac and cheese recipe that I will have to try. I told the kids maybe next week for that one.

I also stopped by All Star on the way home today. The answer to my "what champagne or sparkling white wine do you recommend to use in a pizza dough" question is a split of Freixenet Cordon Negro Brut. Never heard of it but I'm not a champagne guy. Maybe pop the cork Friday night.
Posted by Jon in Albany at 11:17 PM