Another Visit to Rolf's

While Mr. Dave will eat things I won't go near anymore (my days of gas station cuisine are long gone), I don't recall him recommending anything bad. So when he recently recommended the Teawurst at Rolf's, I knew I would be trying it the next time I was in the store. That time was yesterday. A small chub of the Teawust was about $2.50. The date on the label is wrong. I bought this yesterday. 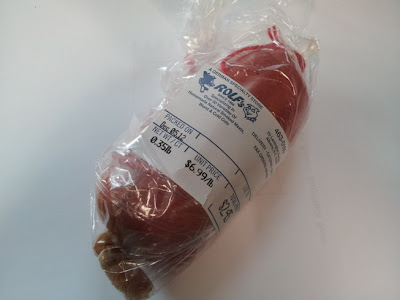 It was a midday stop at Rolf's and I knew I wasn't going to wait until I got home to try the Teawurst, I also picked up a loaf of rye. Using the back of a crummy draft report as tablecloth in my cube, I dug in. 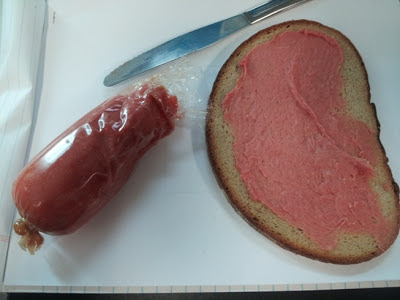 As promised, the Teawurst is very good. And at $2.50 for a small, I doubt I'll be able to leave Rolf's without one in future visits. This particular loaf of rye kind of overpowered the Teawurst. It would be better on a good but less flavorful bread, like the Prinzo's loaf Mr. Dave used. A decent baguette would work or a slice of Bella Napoli bread would be good too. And I think a step up from the Prinzo's loaf would be a Prinzo's hard roll. Those rolls make everything better. And with those rolls in mind, I just figured out the circular route I'm going to take between the office and Rolf's on my next trip.
Posted by Jon in Albany at 10:45 PM