Toxic Friends and Other Holiday Adventures

Toxic Friends are the best and every New Years we head south to Maryland to see ours. When you are with a Toxic Friend, you eat too much, drink too much and have nothing but fun. Even when the kids are crabby. But before we traveled south for New Years, there was Christmas. The holiday gluttony started Christmas Eve at Aunt Carol's and Uncle Lou's house. A good portion of these perogies were fried up and were basically served "All you can eat" style with a complete ham dinner and a bottomless bowl of shrimp cocktail. 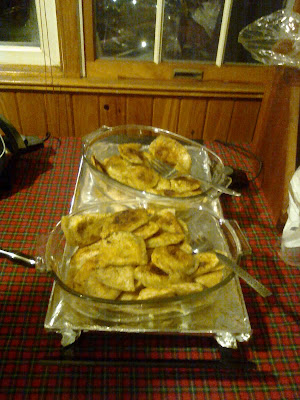 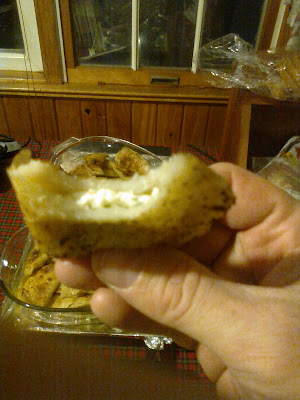 After Christmas, we had one night at the house before we loaded up and headed to Connecticut to surprise my mother with a late birthday party. She was quite surprised to see everyone show up randomly at the Trader Joe's she frequents. I don't have any photos of the surprise dinner, but it was a unique pot luck smorgasbord of Trader Joe's items we picked up while we were there.


The next morning we set off for Maryland to visit Toxic Friends Joe and Adrienne and their kids Olivia and Nate. We arrived on Thursday the 29th and I was actually kind of hungry for dinner. We got take out from a place called Habib's. The store is part coffee shop with store made bagels and kabob joint with the most amazing tandoori bread. Approximately 5:00 PM on that Thursday was the last time I felt hungry until earlier today (the 3rd). Granted, the lack of hunger did not stop me from eating. The biggest feast of the weekend was the New Year's Eve dinner. The first stop was at a Cosco. 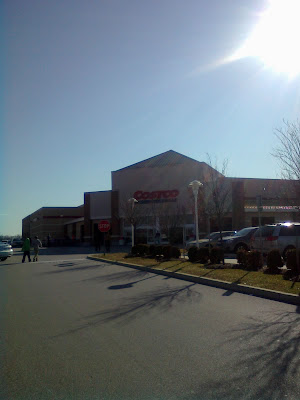 I have always like BJ's, but now I have been to a Costco. I have shopped in a Costco. BJ's, you're no Costco. You can get fresh buffalo milk mozzarella in there and lots of organic stuff. The selection of gadgets electronics, and bulk household type stuff is better too. 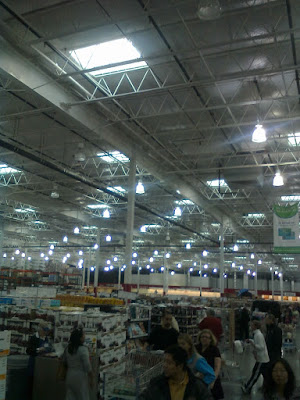 From Costco, we went to Frank's Seafood. This place is amazing and really might be the ultimate seafood market. 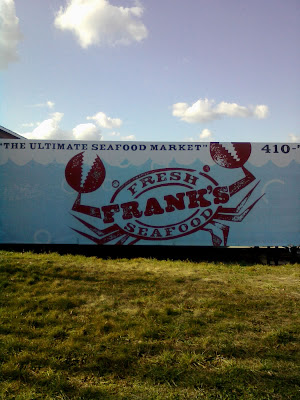 The place was packed with customers preparing for New Year's celebrations. I spoke with a few people and we were not the only ones that drove half an hour to shop here. Everything in the store is super fresh. Albany could really use a store like this. 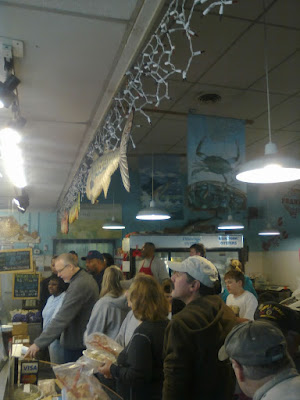 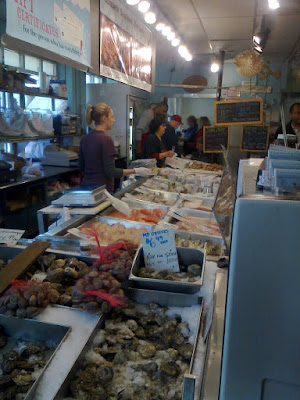 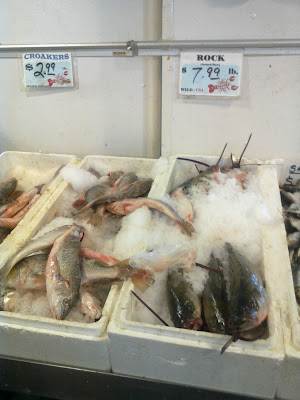 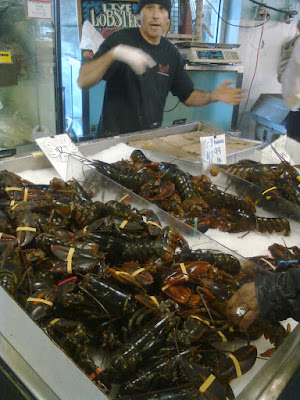 After another quick stop in a Martin's Supermarket (yet another place that is nicer than what is currently available in the Albany area) we went back to the house to get cooking.  Here are some of the appetizers. These shrimp kicked ass and I ate a lot of them. The bacon wrapped scallops didn't make it into the picture. I ate a lot of those too. 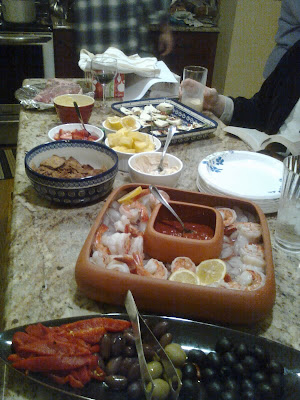 Here's Joe's new wine aerator thingy. You pour the wine through, it makes a cool sucking noise and gets some air into the wine. 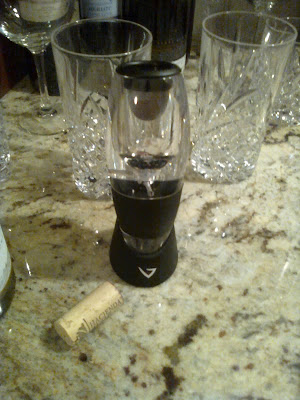 Dinner is served, steak from our steers and roasted asparagus. 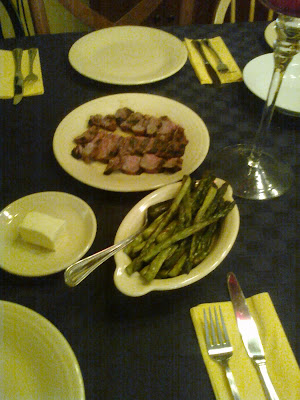 We also had some proschiutto wrapped asparagus. 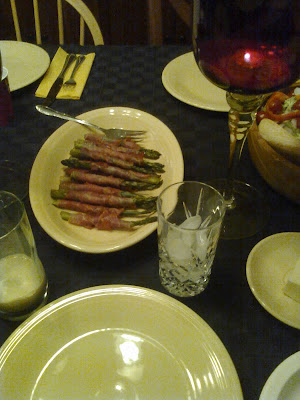 A salad to add a slightly healthy look to the table. 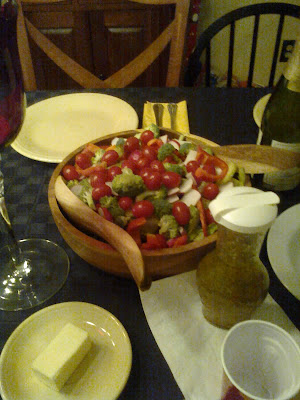 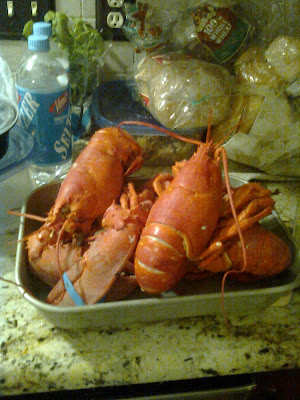 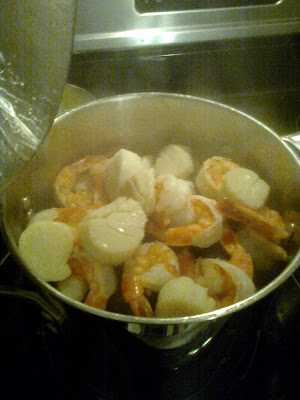 Look at that freakin' bowl of seafood. The broth was insanely good and there was plenty of bread to sop it up. The leftovers got turned into an excellent New Year's day soup. 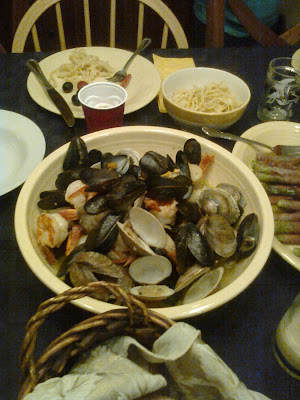 John, Jen and their son Joshua joined us for the festivities. They brought a bread pudding for dessert (recipe by Emeril). It was excellent. 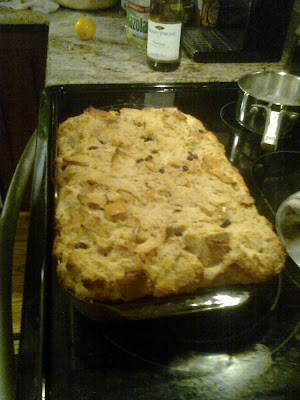 And when you topped the bread pudding with the bourbon cream sauce, it got better than excellent. 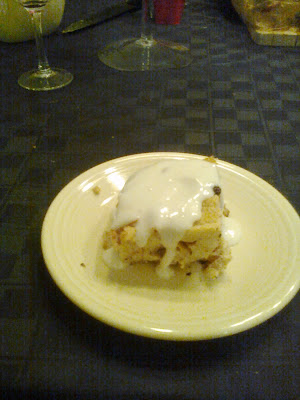 To make the sauce, you use a slurry of bourbon and cornstarch. I don't think it would have ever occurred to me to make a slurry using something other than water. Makes perfect sense. I also had a bunch of Bailey's during the trip. Hadn't had it in years. There's something delicious about a Bailey's on the rocks.

A superb toxic weekend. If you don't have Toxic Friends, I suggest you go out and make some immediately.
Posted by Jon in Albany at 11:06 PM