Trader Joe's has several varieties of olive oil on their shelves. Since our Albany Trader Joe's opened last August, I have purchased two of their olive oils. I was disappointed in the first and almost didn't buy the second. Throwing caution to the wind (the stakes were pretty low here), I said screw it and bought bottle number two. Much, much better. 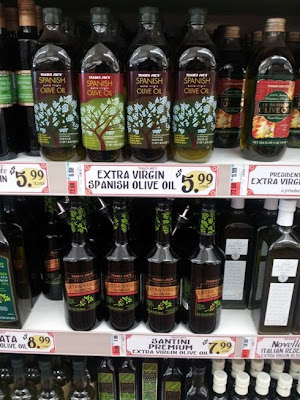 The first bottle was the Santini Premium for $7.99 on the middle shelf. Average oil at best. I think you'd be better off with one of the big name oils you'd find in a supermarket. Plus the little pour spout it comes with is useless. The spout went in the trash after it's first use. Bottle number two is the Extra Virgin Spanish Olive Oil on the top shelf. Surprisingly pretty damn good. Good for cooking. Good in a salad dressing. What a significant improvement. Save two bucks and go with Spanish oil. Or one of the many others, but pass on the Santini Premium.
Posted by Jon in Albany at 10:40 PM