When I first got my sodium citrate from Modernist Pantry, I tried one of the Modernist at Home mac & cheese recipes, Test 1. It was OK but the kids preferred the way I usually make mac & cheese. The lesson I took away from that batch was the technique of adding sodium citrate and blending the cheese while it melts definitely works and makes a beautiful sauce.

Test 2 in the sodium citrate trials was taking the ingredients of my standard no-boil mac & cheese, mixing the sauce together including some sodium citrate, and baking. I don't have a photo. It was decent although not as good as the original. The cheese didn't break but the finished cheese sauce was a little pasty.

Test 3 in the trials was the best yet. (I should probably note that the brand of cheese and the amount of cheese remains a constant in these trials. In fact, the ingredients in Test 2 and Test 3 are basically identical with the exception that I didn't weigh anything in Test 3 - I just winged it. Weeknight meal, science be damned.)  Here's the Test 3 recipe which is a slight adaptation of this New York Times recipe (the creamy one).

Preheat the oven to 375. Put 1 cup of cottage cheese and 2 cups of milk in a bowl (don't skimp too much on the fat content, this batch used 4% cottage cheese and skim milk, if there is no fat, the sauce will definitely break). Add a pinch of Coleman's dried mustard, 1/4 teaspoon of sodium citrate and then whir it up with a stick blender. I suppose you could use a regular blender, but I don't have one. Reserve a handful of 1 pound of grated cheddar (I've been using Cabot Hunter's Sharp) and mix the rest into the liquid. Add half a pound of uncooked elbows and stir to combine. Pour the mess into a greased 9x9 dish and cover with foil. Bake at 375 degrees for half an hour. Remove the foil, stir it up, top with the remaining cheese and bake for another half an hour uncovered. Dun. To make life easier, I put the 9x9 dish on a cookie sheet.

Test 3 was quite delicious and devoured rather quickly. In the past. the cheddar would break and get a little oily. It didn't this time. When you cut into it, the cheese kind of oozed out in a sauce. I tried to capture the cheese ooze (which tastes better than it sounds) to the left of the spoon in the picture. Want to confuse a kid - stop them from taking a scoop of mac & cheese so you can snap a photo. 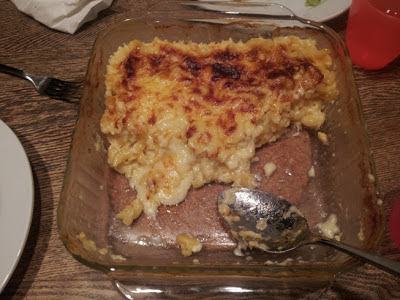 I still haven't gotten to the more complicated mac & cheese recipe in Modernist at Home. The holidays, travel and everyone being sick have put that dish on hold. That will be test 4. One of these days I'll get to it.
Posted by Jon in Albany at 10:50 PM