I dragged the family to Nosh earlier tonight. I had wanted to go for awhile. Got myself a pastrami on rye. I was tempted to order it on white bread with Miracle Whip, lettuce and tomato just to see what the waitress would say, but I behaved. And I was glad I did because the service was incredibly friendly and our waitress didn't need a wise ass a hour before closing. 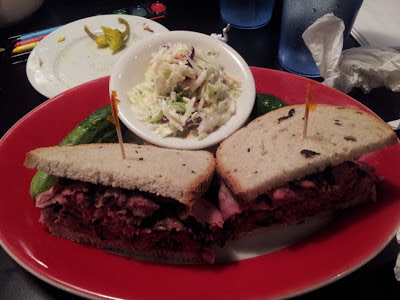 If I wanted to compare this sandwich to one in the city and tear it apart, I definitely could. It wouldn't be hard and Nosh loses the fight every time. It's an OK sandwich, but not one I'll crave or remember years from now.

Let me tell you about a sandwich. Mid 90's. My buddy Ray is going to graduate from college. His whole family is flying out for the graduation. But his younger brother wants to go to the Prom. So his parents fly out early, Ryan is going to the Prom on a Friday night, then Ryan and his younger brother Randy are catching a 6:00 AM flight out of Laguardia.  But here's the kicker, they need the car to get home when they return. So my good friend Derek and I pull an all-nighter to drive them to Laguardia, get them on the plane and leave the car in a short-term parking lot. After we get them on the plane, we planned to take a cab into the city and then we'd take a metro north train home.

Before we take the train home, we decide to grab a bite to eat so the cab drops us off in front of the Carnegie Deli. The place was dead around 6:30 AM on a Saturday morning. There was us and maybe two other tables. At one of the tables, Damon Wayans and a guest were drinking coffee and not eating a bagel. Derek ordered and omelet (which when delivered to the table was delicious and the size of a small TV). I asked the kind of surly waitress if it was too early to get a corned beef sandwich.Her reply, "If it's on the menu, you can get it." I did. That sandwich....well that sandwich was good enough for me to be typing this over 15 years later.
Posted by Jon in Albany at 11:12 PM