By pizza in the near future, I meant tonight. Here's the stone after 3 flax seed oil curings, one in the smoker and two in the oven. 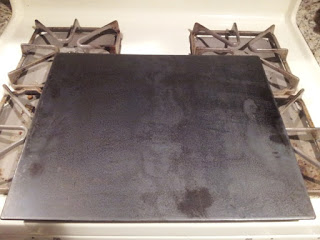 And the cast iron pans look a hell of a lot better too. They could probably use a few more protective rounds in the oven but three is all they are getting for now. 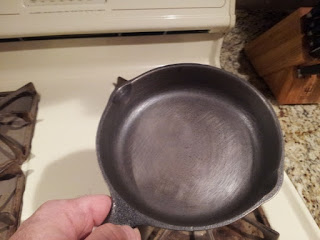 Around 4 this afternoon, I cranked the oven back up to 550 with the steel on the second to top position for a preheat. I didn't use the top to give myself a little more working room and I remember reading somewhere about being too high makes the broiler less effective. I started pulling stuff together for the pizzas. Got the dough coming to room temperature on the counter. Cooked up some bulk sausage - it is in the bowl with the paper towel. Cut up black olives - the kids love these on pizza, I don't know why. Not that they are bad, but in the realm of pizza toppings, black olives certainly don't make my top 5. Some sauce in a bowl, little bit of parm on the micro plane and a bag of Trader Joe's mozzarella. I pointed my el-cheapo temp gun at the plate and registered almost 600 degrees. I wouldn't have thought the oven was over heating. My guess is that I'm getting a reflection off the steel to the heating gas heating element or the temp gun is showing its el-cheapo-ness. Didn't matter, I'm pretty sure the steel was hot. 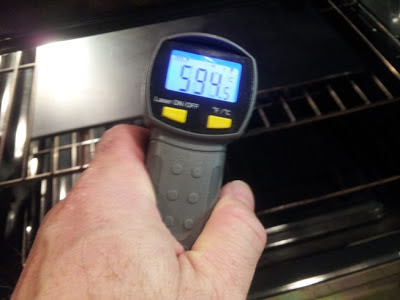 Pizza number one ready to go in the oven, black olive for the kids. I'm get better at working with pizza dough and this dough was fairly forgiving. 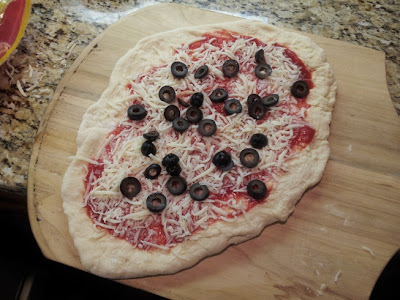 I don't have a clock with a second hand in the kitchen. I would guess I took the pizza out of the oven between 3.5 and 4 minutes. Not too shabby looking. 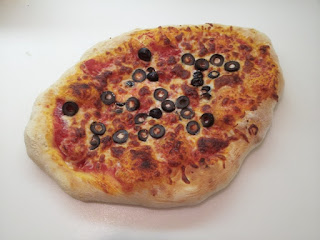 Here it is out of the oven. Took about the same time to cook. 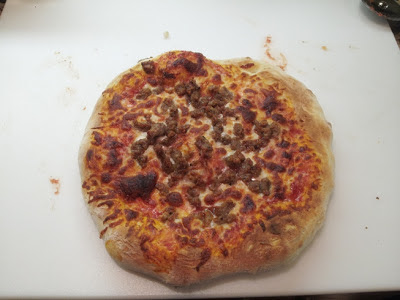 I remember to take a picture of the undercarriage this time. 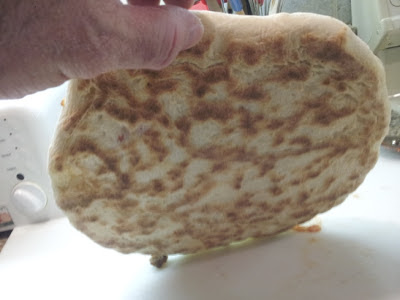 Pizza number three was a combo, sausage and black olive. This one may have taken just over 4 minutes. I opened the oven to spin it. One side was browning faster than the other. 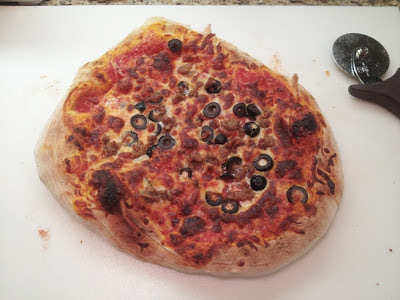 All in all, I think the steel performed well. It did cook faster than the other times I had made it with a stone and I think the undercarriage was better. This isn't up there with the best pizza I've had (not really even close), but I have paid for worse. I think less operator error would improve future runs. I'd take the dough out a little sooner to remove more of the chill. I'll hopefully continue to get better at shaping pies. The puffiness of the outer crust is all on me, can't blame the dough for that. The pizza should be bigger for this amount of dough (about 13 oz.) I think I might divide this amount of dough into 4 smaller pizzas to help with the shaping. Time to watch a few more youtube videos of people working with dough. That, and practice.

Any pizzeria's out there that want to train a completely inexperienced, part time pizza maker that is only willing to come in when its convenient for him? No weekends. If so, drop me a line.
Posted by Jon in Albany at 8:09 PM