More pizza on the road

Back on the road again last week and I was able to cross another two places off my personal Batavia Pizza Challenge. I kept it simple by going with half cheese/half pepperoni small pizzas. First up was Jerry Arena’sPizzeria. The place looks like a pizza dive. Great things come out of dive dinners and dive bars. No reason great pizza can’t come out of a dive too. 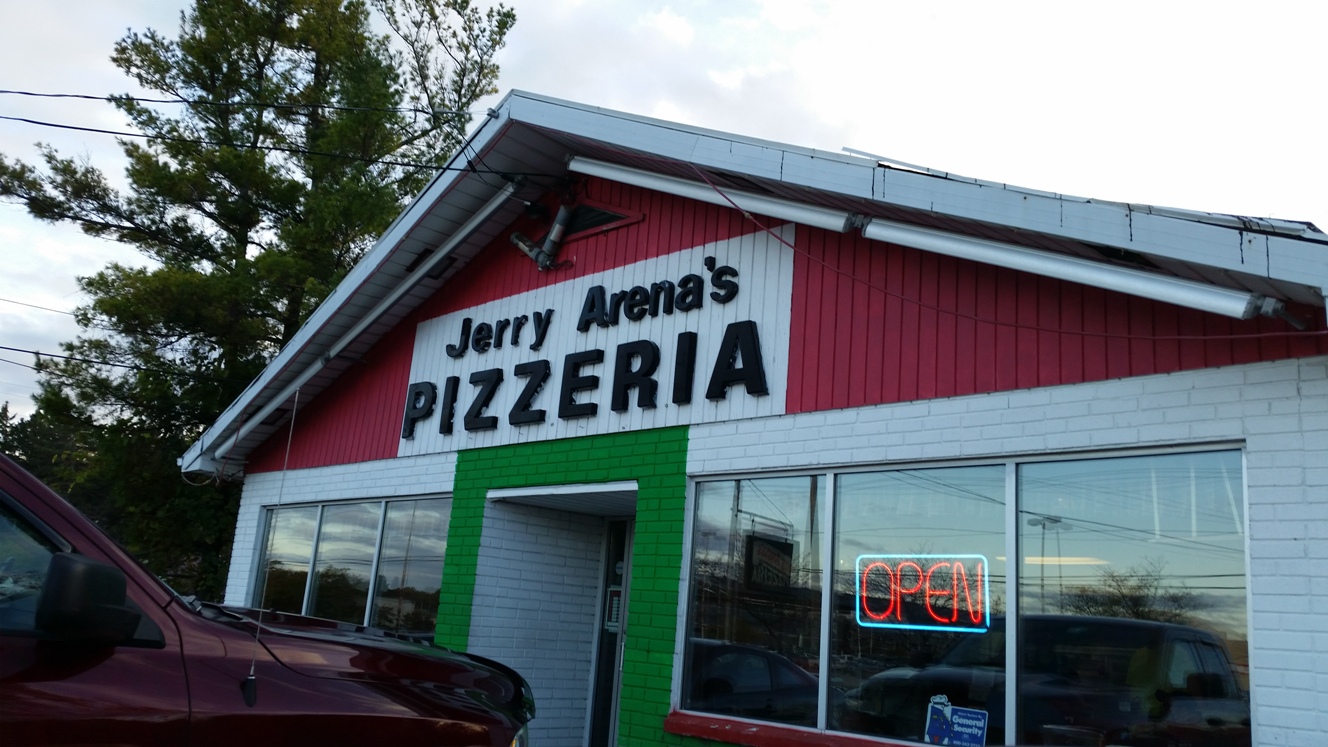 I went in and placed my order. An aluminum pan was brushed with oil. I turned to see what two guys were doing with a video game and missed if the dough for my pizza go through a sheeter but there was one behind the counter. I did see a little hand stretching before the dough went on the pan. A measured spoon of sauce went on next. It looked like a lot. Then it got the cheese and the half pepperoni before heading off into a big conveyor oven.

There was also a post bake dusting of grated cheese. The digital display on the oven was set at 475 degrees. 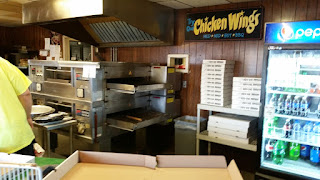 Here’s what I got to go: 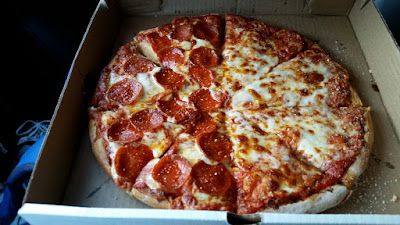 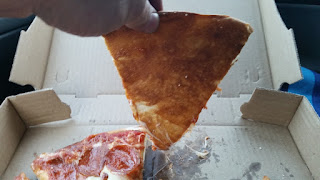 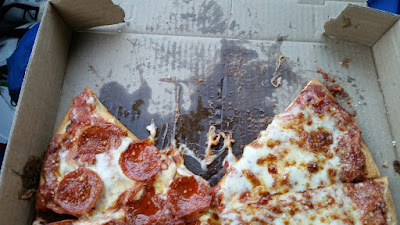 The dough was oily. The crust flavor and texture seemed like a typical chain pizza. There was definitely too much sauce and the cheese slid. I’d say it was actually a little better once it had cooled down to room temperature. It was flavorless cold the next day. All in all, not a place I would return to, but I didn’t drive away angry which was a good sign. Sometimes I can be mature. Maybe skipping lunch made me really hungry. This was an "it is what it is" situation.

My visit to Jerry Arena’s was around 5:30, pretty much right after I go off work. I went and checked into my hotel, took a shower, took a nap and was recharged for round 2. I drove off to Batavia’s Original Pizza. While it was definitely on my radar for this tour, I had also recently seen it on a list of pizza places in New York State listed by county (more on that list later). Batavia’s Original offers a little bit of everything – all things fried, pasta, some seafood, and for pizza – deep dish, Batavia Style, NY Thin, and gluten free. Based on the amount of flour on the pizza maker, I’d ask about cross contamination if I was gluten free out of necessity. They also have a sweet sauce option. I think people in western New York like sugar with their tomatoes.

I went with Batavia style (because when in Rome…) which is a thicker crust than NY Thin. Basically, it is just a bigger dough ball for the same size pizza. Also in their topping options, they had a choice between pepperoni and cup and char pepperoni. I went with cup and char. I later found out it was Margherita brand. Was curious to see if it was Battistoni which looks like a common Buffalo cup and char pepperoni. I'm going to try and pick some up the next time I make it all the way out to Buffalo. From where I was, it was a little hard to see the bake. There are several deck ovens behind the counter, no sheeter in sight and no screens. This pie also got a post bake sprinkling of grated cheese. I sometimes do that too. There is something about a sprinkling of Romano into the pepperoni cups that I like. 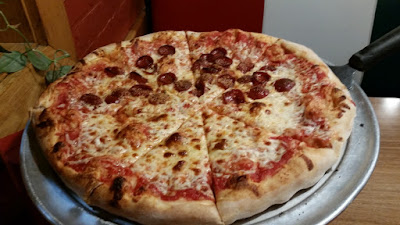 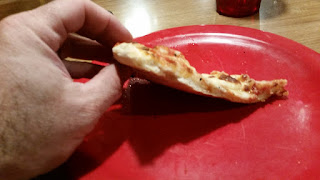 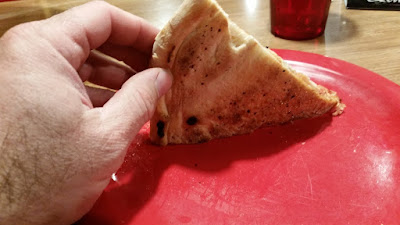 The rim was a little bready. The flavor and texture reminded me of the bread I make out of leftover dough balls. The sauce was nice, nothing really other than tomato. If I get the chance, I’d like to return and try the NY thin style, maybe ordered well done. I like the restaurant. It looks like it does a good business. Batavia’s Original is definitely a family place with bright booths (the colors of the Italian flag), a large dining area, and various daily specials – I forget the day but kids eat free once a week, they have Friday fish fry…that kind of thing. It's the kind of restaurant you would expect to see a little league team celebrating their season with pizza and pitchers of soda but also nice enough that that a four-top with two couples catching up wouldn't be out of place.

I recently saw this list. The list doesn’t claim to be a “Best of.” In fact, in the introduction it says it isn’t. It’s more of a “shout out” guide to places with extra credit given to longevity and “old Italian names.” So click bait…Batavia’s Original gets mentioned for Genesee County. But what about closer to home?

Albany County: Romo’s Pizza in Glenmont- Never been but I have heard nice things about it. They recommend the 9W – sauce, broccoli, roasted red pepper, garlic, onion, cheese and oregano.

Renesselaer County: Ipek’s La Bella Pizza. Heard of it and I’ve never been. The recommended pizza is a chicken/bacon/ranch. I’d order something else. No ranch on pizza for me.

Saratoga County: Gennaro’s Pizza Parlor. I almost got to eat there after a softball game but I was out-voted and we ended up at a burger joint. It is definitely on my local to-do list and I have heard good things about their pizza. The list says the clam oreganata pie is the best pizza here. I'd like to try Harvest and Hearth too. Can't seem to find myself in that area when they are open.

Schenectady County: Paulie’s Pizza. The list recommends the chicken fajita pie. I’ve been to Paulie’s Pizza and I’m not in a rush to get back. Going back to the Schenectady Slice Tour, Paulie’s ranked 4th out of 5 on our family rankings. If you add Marino’s, that’s 4 places within a few miles of Paulie’s that I would rank higher than Paulie’s, but again, this isn’t really that kind of list.

Overall with 4 places down and 4 to go, Batavia is batting 500 on alright pizza – nothing Holy Crap this is amazing, but alright, not chain pizza. Next up is probably Main Street Pizza and Big Pauly’s. I'll probably get out that way again sometime late November.