For a long time, I’ve been an Indian Ladder guy. It’s a nice place. The apples are good. Good cider too. And you can wait in a sometimes long and slow-moving line to get some hot apple cider doughnuts. Being a dad now, I generously offer to wait in the doughnut line while the rest of the family wonders off into the petting zoo area. This generosity is really just a selfish ploy to get the hottest and freshest doughnut for myself, but no one in my immediate family reads this blog so my secret is safe. When you finish at the orchard, Indian Ladder is pretty close to Thatcher park and some impressive scenic autumn views. This experience is what I think of when I think “apple picking.”

But one year when the kids were pretty young (I’ll guess 2 years and 6 months, a big sash baby carrying thing was involved) we ventured out to Bowman Orchards. We drove in and parked. Since we were in an orchard, the stroller didn’t look like it was going to do well on grass so off we went carrying two kids. There was a tractor/wagon that gave you a ride to the other side of the orchard. We took it not realizing we would be what felt like a day’s hike from our car. When we eventually made it back to the car weary from carrying two kids, the bag of baby stuff one always needs to have at all times, and a bunch of apples around an orchard. We drove towards the exit only to sit in what felt like an endless traffic jam of cars waiting to get their apples weighed. There were cranky kids. Cranky parents. Everyone, myself included, needed a nap. It was miserable. I left vowing never to return. Lifetime ban.

Everyone knows what happens when the sit-com dad “puts his foot down.”

We went back to Bowman’s Orchard on Sunday. The main reason being that Bowman’s is the only orchard in the area that allows dogs. This late in the season, the orchard was busy but it was not nearly as crazy as our first visit. Another thing I noticed from walking around is that the place doesn’t seem as big when you aren’t carrying children and racing the toddler nap-time fatigue meltdown clock. It’s like going back to an epic place that seemed overwhelming as a kid but is just an unimpressive, regular place when you return as an adult. 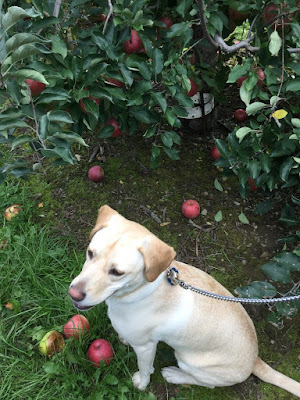 That’s a lot of apples. The orchard boasts over 46 varieties. Why say over 46? Just say the number. It’s definitely less than 50. If it was 50 or more they wouldn’t be talking about 46. And 48 or 49 would probably be “Almost 50 varieties of apples.” That leaves 47. I’m guessing they have 47 varieties of apples. Only the Bowman’s know for sure. Anyhow, with so many varieties, you can’t help but wonder, “Will Radiant Runkle be the best apple I’ve ever had in my life?”

It isn’t. Neither is Pinova. None of the unfamiliar names were anything special. Should we return next year, we’ll probably just go right to the Cortlands, Empires and Macouns for the apple picking portion of the visit. Here’s a tip should you go to Bowman’s. You can bring your own plastic bags. They’ll sell you some but any kind of grocery bag will do. The apples are sold by weight. If you bring a pen and some scrap paper, you can label each bag of apples. That way, your Mutsu apples don’t get confused with Shizuka apples…because that would be tragic. The only problem with our multiple labeled bag method is that it is easy to pick a shit-ton of apples without realizing you picked a shit-ton of apples. Each bag isn’t that heavy. A few bags get dropped off at the car as you walk by heading towards another section of apples. At Indian Ladder, you buy a bag. When the bag is full, you’re done. Bowman is more open ended and I had some sticker shock on the way out. I doubt we will run out of applesauce at Thanksgiving this year.

Since we made this trip later in the afternoon on a crisp day towards the end of the apple season, the place wasn’t packed so there was no traffic jam as we left. After we went through the orchard checkout, we headed over to the barns for some cider and cider doughnuts. Here is where Bowman’s will always lose points in my opinion. The doughnuts aren’t fresh from the fryer. They were probably made that day since there is a high volume of people moving through the orchard. The doughnuts are sold cold in a soulless, plastic clamshell container. 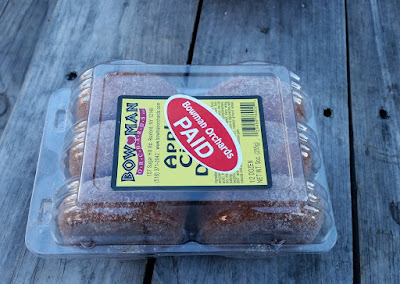 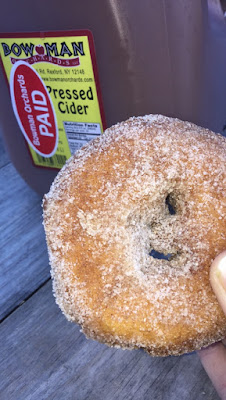 I suppose hot doughnuts would steam and get nasty in the plastic container. From the line, I could see several trays of doughnuts in the kitchen area waiting to be packaged. These were bigger than the doughnuts at Indian Ladder, but in this case quantity does not equal quality and fresh, hot doughnuts were noticeably missed from the apple picking experience this year.

So Bowman Orchards, they’ve got a lot of varieties of apples for you to pick (I’m guessing 47), they let you bring your dog, and they do have stuff for kids to do after apple picking. Looked like there was a corn maze in back too. But the cider doughnut game is weak. Really weak. If the orchard is busy, you can expect to sit in a little traffic on your way out of the orchard. Bowman’s is much nicer than my emotionally scarring memory of the place. I have officially lifted my Bowman Orchard lifetime time ban (which, in reality, was only enforced until my wife wanted to go back).
Posted by Jon in Albany at 7:40 PM