Once again, my family willingly followed me along on a pizza themed excursion. This time it was the FussyLittleBlog's slice tour in Schenectady. Five stops. Five slices to judge with the goal of determining the best New York style slice in Schenectady. Now what exactly is a New York Slice? To me, Scott Wiener of Scott's Pizza Tours gave my favorite explanation:

“a New York-style pizza is a large-format pizza. It’s cut into eight even wedge slices. The whole diameter of the pizza is somewhere between 18 and 22 inches, and it’s made with a low-moisture mozzarella, baked in a gas-fueled deck oven at about 550 degrees, for somewhere between seven and ten minutes. When it’s served to the public, it’s available either fresh, or if you’re there ten minutes late, as a reheat slice. And the slice is always larger than the plate upon which it is served. This is a New York slice.”

I'd like to add that the reheating the slice add a crispness to the bottom of the crust. In my mind, the best NY Style slice I've ever had was at Pizza Town USA ironically located in Jersey. Somehow the slice is impossibly thin as well as crispy and tender at the same time. Here's a link to my first visit there. Midway through this tour my youngest daughter Casey was a little confused about slice shops. I explained that they were trying to be like Pizza Town, USA. She said, "Well then they're failing." That's my girl. After our December visit to Pizza Town, she wanted to move closer. I mention this to place this tour on a scale of NY Slices. Two stops on this tour made a decent slice (I'll do the math for you - three did not), but those decent slices aren't on the same level as the best of the best. The "best" Schenectady slice isn't on the same playing field as the "best" NY slices.

On the score sheet was a space for the anticipated winner to see if there was a little bias from the start. I had only been to one of the places so I was flying blind without any expectations. The kids picked expected winner's based only on how much they liked a shop's name. Allison liked Nico's and Casey liked Isopo's. After a first look at our family's score sheets, we were split about which shop was the best. Usually we vote as a block. We discussed not turning in all of our scores to lessen the impact of the family voting block. I think on one soft serve tour we were 20% of the vote. Upon further review of our scores, we technically voted 3-1. But if we were working in pencil some numbers would have gotten adjusted. 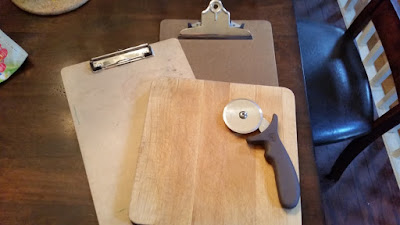 We got two cheese slices at every stop. I had a cutting board and pizza cutter to make 4 skinny slices. Prices were all pretty much same, $4.30 to $5.00 for two slices. Here's how the tour broke down. (Note: Some scorers used factions of a point. I blame the Olympics.)

We got here at 11 and the tour kind of slammed them. 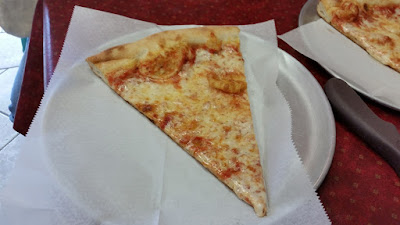 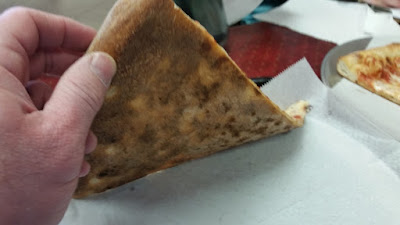 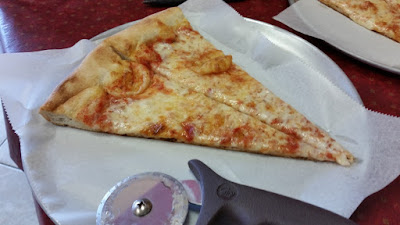 My notes: In the rush, the reheat wasn't very long. The slice warmed up but the bottom crust didn't crisp that much. Not a lot of flavor in the crust. There was a good cheese melt. The sauce was on the sweet side. I'd call it a better than average upstate that oddly seemed to get better as it cooled.

Amy: I liked the cheese. Stretchy and tasty.

Allison: Sauce is good, end crust is too doughy, cheese is alright and doesn't come off all at once (which is good). 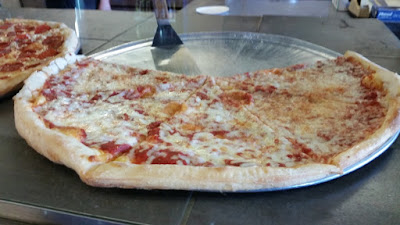 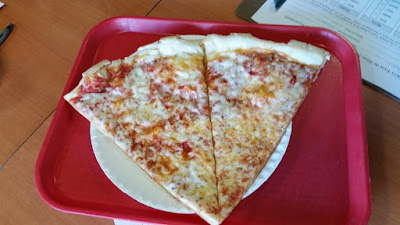 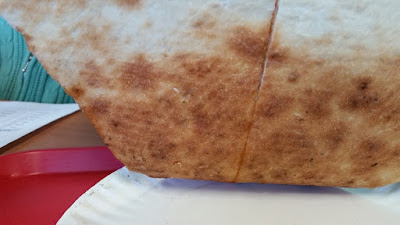 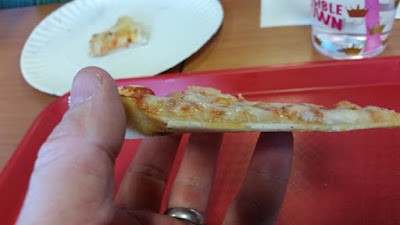 My notes: Pale and under cooked. No crisp on the reheat. Dough was dense, kind of bready and could use a little salt. The sauce was sweet. Very thin rim didn't rise. Cheese was a little rubbery and would slide off. I think this is a fairly typical slice in the area.

Amy: Not uniform, some bites completely different than the last. Some didn't have sauce. I didn't like the cheese. I liked the crunch in the end crust but the under crust was lacking.

Allison: Sauce was pretty much the same as Pizza King except there is a little more. End crust parts were more doughy while some parts were crunchy. The slice was pretty thin but the under wasn't crunchy and it was a tiny bit soggy. The cheese had a weird taste that I can't place that made it worse than Pizza King. 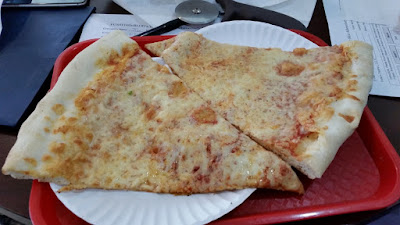 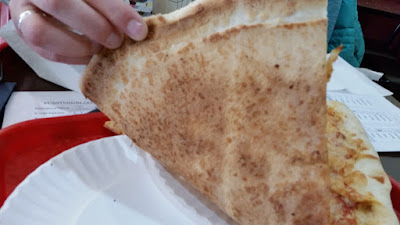 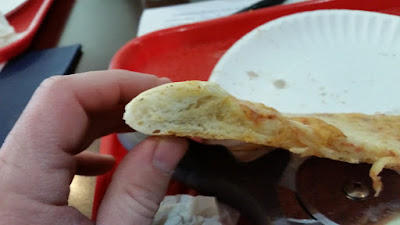 My notes: Bready, under cooked crust that was soggy and couldn't support its own weight. Not crispy at all. The sauce and cheese combined into one layer but the components of that layer aren't good. I have heard their whole pies are different and better that the slice pies but this slice was not good. I ate half of my half slice.

Amy: Not good. Doughy. All dough.

Allison: There is a small layer of sauce to an extent where you can't really taste it. The cheese tastes weird. The slice is really droopy and the under is not crunchy at all. The end crust is more  consistently crunchy than Isopo's but it is still doughy.

Casey: Under crust is a bit soggy. GIANT slice (bigger than Pizza King). Cheese is weird. Not enough sauce. 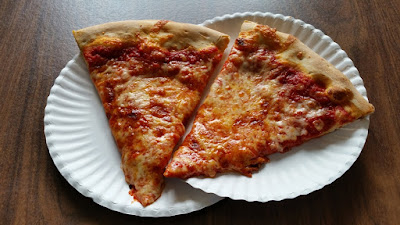 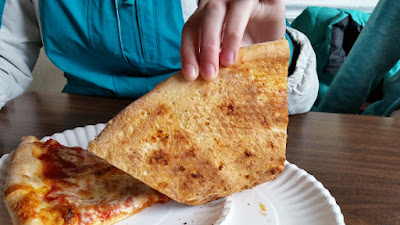 My notes: Over sauced, very soggy. Sauce seemed unseasoned then got sweet. Cans of Stanislaus tomatoes were in the trash. It's a great brand. I liked the cheese flavor but it slid all over on top of the sauce. Bready crust that mostly tasted bland. I think it could have used some salt. Smaller slices. Very so-so.

Amy: Too much sauce, crust was tasteless. Soggy.

Allison: The sauce still had some tomato chunks in it making it too tomato-y. There was also a lot of sauce on the slice. Cheese was good but it came off easily maybe because there was so much sauce. The crust looked weird on the bottom and tasted cornmeal-y. The crust was thin but not really thin like the earlier shops. The end crust was also cornmeal-y but it was more consistent than Nico's.

Casey: Slices are smaller than the other stores. 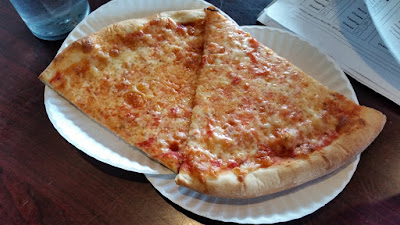 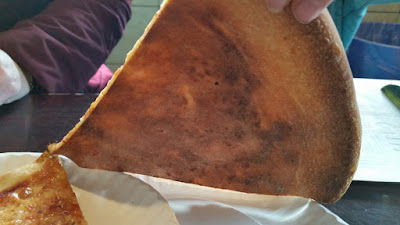 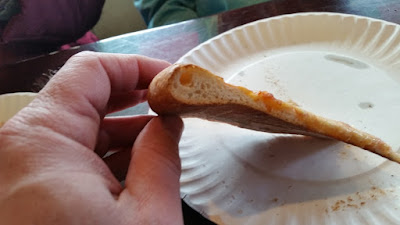 My notes: Crust is brown instead of some of the pale we had been seeing and has a nice crispness. Cheese is good. Cheese and sauce boiled into one layer. Actually had a cheese pull which was the only one I noticed during the tour. The sauce could use a little more seasoning and the slice is salty but in a good way. This was the closest to what I think a NY slice should be, but still not great. There was a little aftertaste to the end crust.

Amy: Crisper and crunchier than others. Ingredients tasted good. I tend to like more cheese. The most consistent of all.

Allison: End crust was really good. It was crunchy and just enough doughy. You couldn't really taste the sauce but it was kind of a seasoning and it made the pizza really good. The pizza was just as thin as Pizza King but it was the crunchier of all of them. The cheese tasted really good and went nicely with the crust and sauce.

The last line on the score sheets is: What was your favorite and why?

Me: I Love NY. I thought it was the closest to my ideal NY style slice. Not in the same league as what is available downstate though.

Amy: I would go with Pizza King because I liked the ratio of the ingredients to the overall slice. I tend to like a little more cheese the I Love NY pizza had but that crust was good is you like crisper pieces. I liked the flavors of Pizza King better.

Allison: I Love NY was my favorite because is had the best flavor overall and the crust was crunchy and consistent.

Casey: My favorite was Pizza King because it had plenty of room to sit and its crust was great. It also had a good amount and flavor of the cheese and sauce.

Amy didn't want to scribble up the whole score sheet to re-balance her scores because technically she scored I Love NY a touch higher than Pizza King. Next tour will have pencils. But if she readjusted her scores, The I Love NY score drops a little and the Pizza King score goes a a bit and you basically have a tie. And in fairness to Pizza King, I think if our slices had spent another 60 seconds re-heating, my scores might be adjusted too.

Based on the slices we got, our family is split between Pizza King and I Love NY as the best in Schenectady. I suppose there are worse things we could argue about. I have no idea how the rest of the tour voted (there was a pretty good turn out), so you will have to watch the FussyLittleBlog for the Official Results.  My guess is that I love New York gets the win with Pizza King close behind. At least that's how I saw it.
Posted by Jon in Albany at 9:20 PM