Anyone that has spent some time poking around this site knows this, but if you’re new: I have a thing for pizza. And last week I was on the road for work. By myself. I ate a lot of pizza.

Traveling alone can get boring. For about a year I traveled with the same guy. We bounced between a very comfortable silence to personal stories to random dumb conversation to guessing which TV shows got good ratings because the ratings happened to be in the USA Today the hotel had in the morning. On my own, it was just podcast city. Some interesting, some dumb, some funny.

Back to the pizza. For a late lunch, I popped into the Hornell Wegman’s. I had a small salad and couple cookies (most Wegman’s have a bulk cookie section and I can’t walk past a snickerdoodle, it’s another thing I have). After that, for the next 30 or so hours, I only ate pizza.

Once or twice a year for probably a little over a decade, I find myself in Olean. It’s a little weird how well I know my way around town. I’ve had pizza there. For the most part, it is exactly what you’d expect. Fairly cheap puffy dough with no flavor topped with a purchased pizza sauce and a lot of cheese. This type of pizza is everywhere.

While I was doing a search for food online, I found the Brooklyn Bakery. It looked like it was mostly bread but they had a few pizzas and everything is cooked in a wood fired oven. At first I wasn’t sure how I had missed this place in my earlier travels (I think it has been open about 5 years). Then I tried to find it. I knew I was nearby, but still couldn’t find it. I parked nearby, and had to start walking using the GPS to find the small path lined with stacked firewood that led to the shop. I had a nice conversation with the owner/operator while he made my pepperoni pizza. I should have taken an oven picture but it was just the two of us in the shop and the idea of cell phone pictures felt a little weird. Instead, this pictures is from their Facebook page 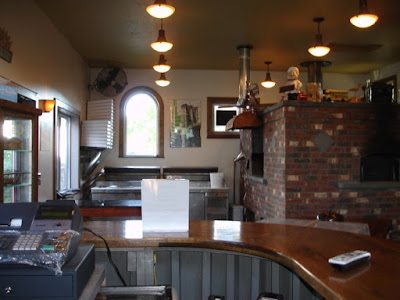 The owner designed that oven. It’s a large rectangular oven with a door on the side for the fire. The light on the front of the oven (the next pizza stop had one too) is an idea I should have stolen. It might not be too late. Not sure I could find a similar light that would be OK outside. If not, I’ll just pick up a nice flashlight. Anyhow…the dough was already stretched out and placed on a screen before it was topped. When I saw that, my expectations dropped. But I was told the oven floor is in the mid 700s and that’s pretty hot for the amount of time the pizza baked. I’m guessing it was in there for about 5 minutes. I think the oven ceiling is a little high and the screen balances out the bake. Which is fine especially since it looks like a commercial bread oven first and a pizza oven second. The pizza spent the last minute directly on the oven floor without the screen. It looked good. 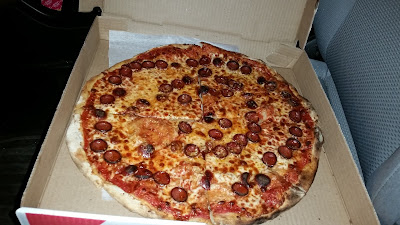 What I got was a very crispy thin crust pizza. The cheese, sauce and pepperoni were all good, but the crust was just texture – no flavor. So not a great pizza, but certainly not a bad pizza (over the course of the night I ate the whole damn pizza and I would rank it above many Albany pizza places). I would, and probably will, go again.

Oddly, I wasn’t hungry for breakfast. At lunchtime, I found myself north of Olean in East Aurora, home of the Elm Street Bakery. I had heard of the Elm Street Bakery from a few places. The pizza on their menu has made some “Best of” lists. I had been to the Eat Aurora area several times but I had never been.  Their oven has a similar look to the Brooklyn Bakery, similar lighting up front too. On their web page, I found out it is an Allen Scott oven which is interesting only because if I rushed into building my oven without years of reading and research, I would have built an Allen Scott oven as is describe in the book: The Bread Builders: Hearth Loaves and Masonry Ovens. I’m glad I didn’t. The ovens have a lot of mass and take a long time to heat up. Once they are hot and heat saturated, they stay hot a long time. Perfect for a place like a commercial bakery, not quite as good for firing up on a Saturday afternoon. 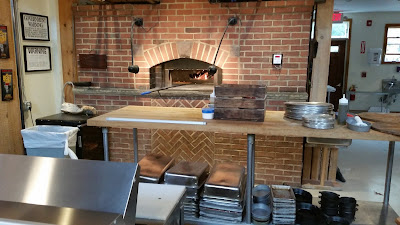 Enough blabbing, I got a pepperoni pizza for lunch. 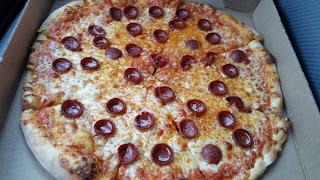 This pizza was much softer than the night before but other than that they were pretty similar. Good sauce, good cheese, good pepperoni but the crust was kind of bland. Good, decent pizza, just not mind blowing or amazing. Again, better than a lot of pizza in the area. The best thing I got at the Elm Street Bakery was a change in perspective.

For the past two years, I have been trying to limit the pizza I eat to only my pizza or some place well known. I think I’m done with that. I’m going to try some more pizza. Probably not any and all pizza – I’d prefer to not gain any more weight. But I’m going to try more. Best case, I get fantastic pizza that I remember for years to come. Worst case, I get to walk away smugly thinking that my pizza is better.

I fired up my oven this weekend. The first 4 pizzas were less than spectacular. The dough fought me a little, the oven floor was a little too hot, I put too much cheese on one pie and it was totally out of balance. The next 4 came out much better. The oven had cooled a little and I cranked out some decent pizza. I brought a sausage pie over to our relatively new neighbors. I still get a kick out of delivering pizza. I'm also almost to where I'm going to stop any work on the oven for the year. After Thanksgiving I'm going to start a sourdough culture for some dough experiments. Time to stop building the damn thing and just use it.