I had a pizza post almost set to go tonight, but there was trick or treating and I saw this while walking the streets for candy:

The setting:  A typical, dime a dozen suburban cul de sac.
The characters: my daughter and two of her friends and a group of 6 or 7 kids ranging in age from 7 to 10.

My daughter and her friends are strolling along talking. The trick or treating is secondary. They are in no rush to get from house to house. They don't care and are enjoying each others company. For the most part, I am usually 20 or so feet away from them letting them do what they but around just in case I'm needed. They are all in 8th grade. I'm not sure how many more costumed Halloweens are in their future.

The pack rang the bell and then took off. A father asked what was going happening. One pack member yelled, "We ding dong ditched!" Most of them scattered. One pack member hid behind a bush. When the door opened, my daughter and her friends had just gotten to the stoop. They said, "trick or treat," got some candy and politely thanked the home owner. The kid hiding in the bush realized how dumb he was being, got in line and got some candy. I'm not sure the rest of the kids realized the error of their ways.

And in other news, we are fostering another dog and she is freaking adorable.  She's on my lap right now. 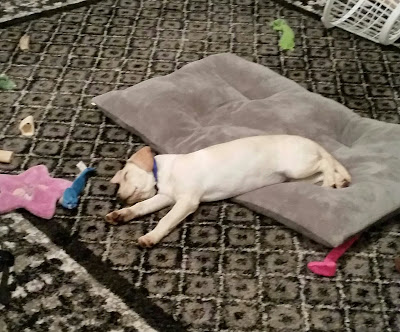