I guess it's not exactly local. But the company is based in Saratoga Springs.

Here's the story. I wander into Empire Wines during my lunch break to buy booze for Thanksgiving. On the list:

Bourbon - not sure which one I would purchase, it was either going to be something I never had before or Basil Hayden.

Rum - I wanted to get a bottle of 13 year old Plantation Rum. It's really good rum. I describe it as everything Captain Morgan wants to be but isn't.

Tequila - I get a bottle whenever my brother is going to visit. He likes sipping it on the rocks and he got me sipping it too (no rocks for me though). I usually get Milagro Anejo. I like it because I think it almost tastes like a margarita on its own. Truth be told, I was drawn to the brand by the name because it reminded me of the movie The Milagro BeanField War.

So there I am walking into Empire and it's pretty busy with pre-Thanksgiving booze buying. That place sure looks like it moves a ton of booze. There a woman with a table set up, lots of clear little plastic cups filled with something and a pitcher of mixer. As I started to walk by (I was shopping instead of eating lunch and was working on nothing but a cup of coffee so I wasn't thinking sampling) the woman politely offered me some Saratoga tequila. Wait, what? She had my attention. 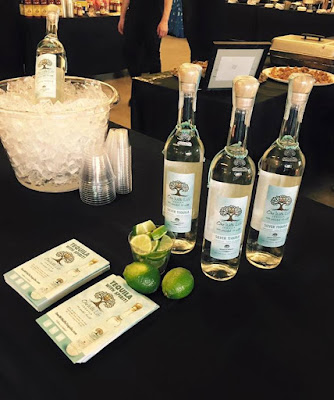 It's called One With Life Tequila. The company is based out of Saratoga but everything is made in Mexico. Each bottle comes with a little bracelet and a saying. I tasted the tequila on it's own first while she told me about the organic agave and how she travels to Mexico a few times a year. My first impression was surprise. I did not expect the tequila to be this good. I liked it a lot. It was similar to the Milagro in that it was kind of a margarita on it's own but it was better than I remember Milagro being (it's been awhile since I've had it). Then I tasted it with the mixer she had and it was still OK, not my favorite cocktail, but this tequila is for sipping. It's too good to mix.

Here's where assume made an ass of me. I've had stuff from a lot of small batch distilleries that seem to be popping up all over the place. I get that they are starting out, finding their way, and sometimes high quality ingredients are expensive.  But if you are going to make a bottle of whiskey and charge somewhere between $40 and $50, that bottle of whiskey HAS to be better than a $35 bottle of Basil Hayden. And many times it's not. I assumed the price of a bottle of was going to be in the $50 or more range.

I thanked her and continued into the store on my shopping trip. When I got to the tequila shelves, there were bottles of One With Life Tequila priced at $37.99 which is the same price as the Milagro Anejo. Solely on the first impression, I thought I liked the One With Life better so I left feeling like I was getting a little value, not much, but definitely not overpaying for something labeled artisan or organic.

On follow up tastings, I still really like this tequila and I think it is my new go-to tequila. I'm not alone. After his first sip, my brother declared it excellent tequila. He is much more into tequila than I am. He's got shelves of the stuff (no kids) and he was surprised by the price point too. And if you don't trust me or my brother, Wine Enthusiast gave it a 94. They gave the Milagro Anejo a 90.

If you are in the market for some tequila, give this One With Life Tequila a try.

For anyone interested in the rest of the shopping trip, I did get that Plantation rum and went with Tuthilltown Spirits Baby Bourbon I have wanted to try for awhile. It is also quite good.
Posted by Jon in Albany at 10:23 PM