Saturday was a little overcast and threatening to rain, but it didn’t mater to the group of people that went to FIVE soft serve ice cream places to see which spot they like the best. For the most part. I am just going to be the reporter here. In looking over my notes, my comments were generic like “nice texture” or “good.” And I’m also cheap so whenever we get soft serve, I think to myself, “we could have gotten 3 half gallon’s from Stewart’s for the same price and I would have like it better.”

But putting that aside, I will start you off with these two things that I think are worth mentioning. First, I liked the ice cream at each and every one of these places more than all the places we visited in the Saratoga County tour we did last year. And second, I have always been a vanilla soft serve guy. Comparing all the vanilla soft serve last year showed how mediocre soft serve vanilla can be. Often with a weird metallic after taste too. So this year, I went with a chocolate/vanilla twist so I could taste both the chocolate and the vanilla soft serve. I think the twist actually covers up some of the sins of each flavor. The vanilla mellows some of the overly sweet chocolate, and the chocolate overwhelms the weaker vanilla flavor, but it wasn’t that good to begin with and it seemed to eliminate the weird aftertaste. I only noticed the weird aftertaste when eating the vanilla alone.

At the first stop, Allison and Casey were accidentally given twists so they have sores for chocolate at Mac’s. I dropped the chocolate from their scores. I didn’t rate any toppings and Amy only wrote in 3 of the 5 overalls when I took a picture of her score sheet (Daniel caught the error and I think she fixed it, but that was after my photo) so I dropped the Overall from her scoring. Also Allison and I each put an enthusiastic "6" in a box - those were reduced back down to the upper limit of 5. That left 100 available total points for any ice cream stand to score. One other note, Casey was filling up so we stopped ordering an ice cream just for her. She still tasted vanilla and rainbow sprinkles at every stop though. Except the last one because the shop ran out of sprinkles.

From here on out the commentary is from the notes of my wife Amy and daughter Allison. Casey kept score but didn’t do much of a write up. 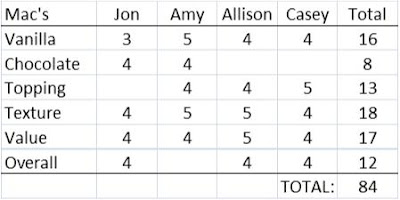 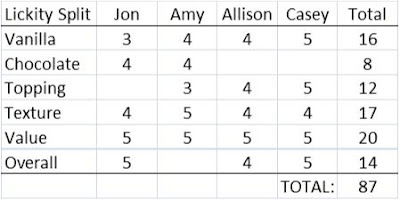 Big Dipper, Wynantskill
Allison: It wasn’t very creamy which made it hard to eat off the cone. Sprinkles had a little less flavor than they did at other places. I think I like it better that way. Vanilla ice cream barely had any flavor.
Amy: Just OK, nice and creamy and nice texture but lacked taste, caramel very super-sweet and thick. 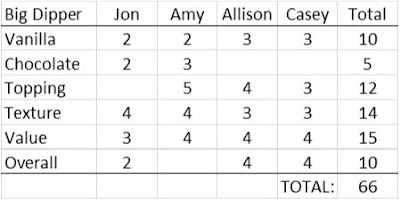 Snowman, Troy
Allison: The texture was really creamy. The sprinkles still taste the same. The vanilla was really rich in flavor. I think it was definitely worth what we paid for.
Amy: did not like the caramel sauce, tastes sweet with depth to flavor, vanilla had stronger flavor but with an after taste. 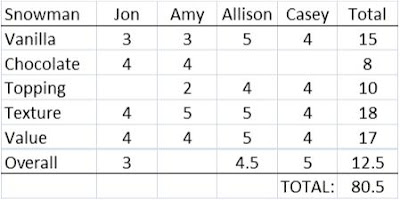 Chrissy’s, Schaghticoke
Allison: The texture was not creamy at all. The vanilla was alright. They ran out of rainbow sprinkles so I didn’t get to try those. I don’t think it was worth what you paid for.
Amy: It was butterscotch and not caramel-so yuk, they were out of sprinkles, ice cream was creamy and tasty, nice heft, but overall value not as good as Lickity Split. 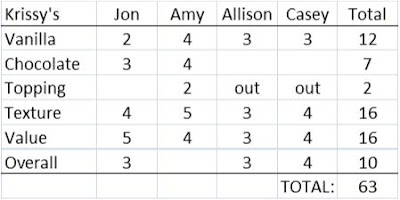 So the way our family scored it, Lickity Split was the best by three points over Mac’s and third place went to the Snowman. Chrissy’s took a hit for running out of sprinkles. Had they had the sprinkles, I’m pretty sure they would have edged out the Big Dipper for 4th place. I'm curious to see how much our family skewed the overall results. We're kind of a voting block or probably not quite a third of the entire tour group.

The tour was a fun way to spend a Saturday afternoon. If you get the chance, try to make one of the Profussor’s Tours. Trying several versions of the same thing back-back is interesting and you might learn something about your preferences. I got twists on the tour just to try both flavors. In the future, it will probably be what I order...unless I can talk everyone into going to Stewarts and getting 3 half gallons.

Also, if Rochelle offers you some of her fermented papaya, take it. It's delicious.
Posted by Jon in Albany at 12:16 AM