At about 10:00 in the morning on Father’s Day, I was wheeling a dozen concrete blocks out of Home Depot on one of those flat carts they have there. Those carts are a little exciting to steer with the just over 300 pounds of block on them. Well, probably more exciting to stop once you get rolling. Anyhow, as I was leaving, another dad I know was on his way in.

“Building a Father’s Day castle?” he asked.
“Nah. I’m a little bit of a pizza nut and I'm building the base for a wood oven.”
“Alright…have with that.”

Here’s where we are: Last year, the foundation slab was poured. 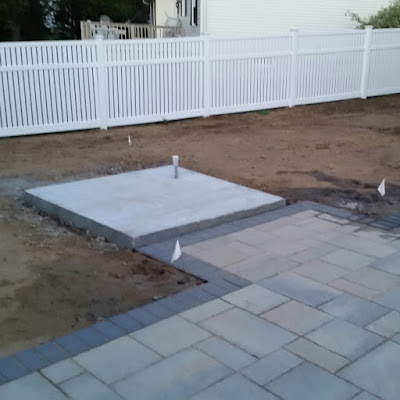 Relatively recently after a lot of flip flopping on the design, I got going on the project. I opted for slightly modified version of the stand I had settled on this spring. I’m skipping two little bump outs that I think would just be in the way long term. The inside of the stand will be wide open.Turns out a dozen concrete blocks fit very nicely on a 2’x4’ piece of plywood in the back of a minivan. 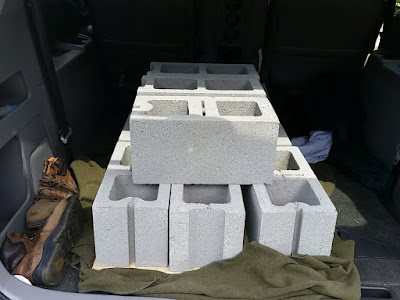 A handful of trips spaced out at random times I happened to be driving past a Home Depot and I had all of the block I needed. I drilled seven holes in the foundation slab at the middle and ends of the walls. I put some construction adhesive in the hole followed by a piece of rebar. It’s surprising how quickly that stuff sets up and how strong it is. Then I started stacking block. The first four courses were pretty easy. The only cuts I had to make were to split a few blocks in half to get a running bond (meaning there is no spot where a block is just directly stacked on top of another block) in the wall. The wet saw works like a champ. A very loud champ. I’m glad I invested in some hearing protection. The dark gray/wet half blocks in the picture are the ones I cut. Everything was pretty level and flush. 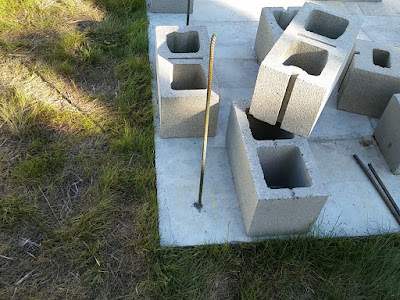 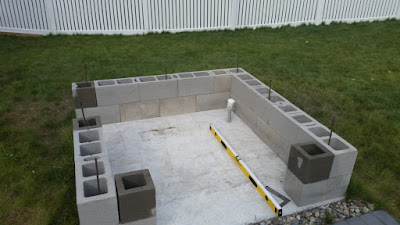 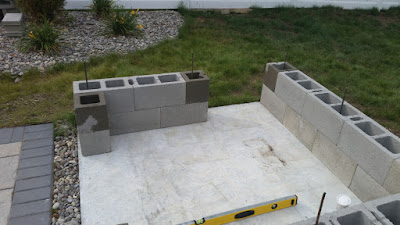 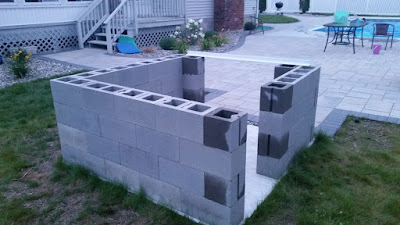 Next up was the firth and final course. This was going to be a little harder and require more cutting. To span the openings, I am using 2”x2”x3/8” pieces of angle. The angles are a nice and shiny white because I put three coats of Rustoleum on them. To get the blocks to fit, I had to shave some off the sides and bottom of the blocks that sit in the pairs of angles. Originally, I had just shaved it off the sides and was quite prod of myself because I did a very nice job….only to realize I needed cuts on the bottom too. I considered using mortar to raise the rest of the blocks up 3/8th of an inch but decided I could do nicer work with the saw than trying to level half the stand with mortar. After a bunch more cutting, I ended up with a bunch of blocks like this. 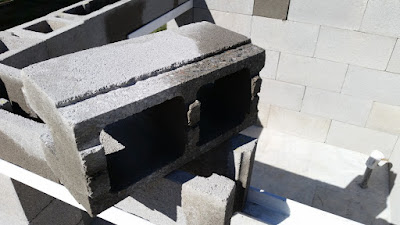 There was also one corner that required some custom cutting to sit nicely with the angles. If I had to do it again, the front angles would be about 6 inches shorter and I could have saved an hour. Once everything fit nicely, I still had a little more cutting to do. I want to put some reinforcing steel in the blocks over the angles and fill them with concrete at the same time I pour the concrete slab that will support the oven. To do this, two 4 inch deep cuts were made in the block walls. Once the cuts were made, a light tap of the hammer knocked out a chunk of concrete. The blocks over the angles now look like this. 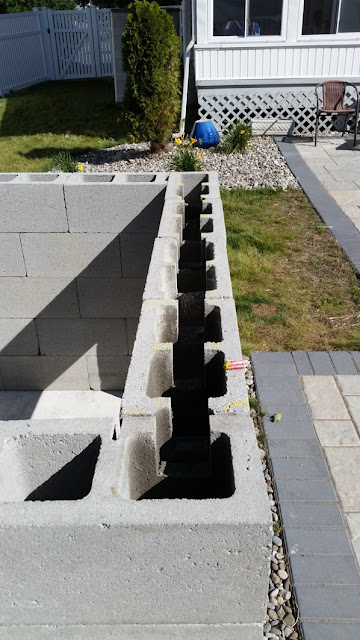 Next up is a consultation from a friend on the best way to run some conduit then I’ll start filling some block cells with concrete. Then it’s time to form and pour the concrete slab. I have a few ideas to test to see if I can make that a little easier on the back. Once I test the idea out I can decide between bags of Quickcrete for the slab or should I have premixed concrete delivered from on a truck. Today, I'm leaning to mixing it myself. That is very subject to change. Probably daily.

In other oven news, I have completely redesigned the oven hearth. I’m going to go for the best of both worlds. I want to be able to cook Neapolitan style but I also really want to be able to chase down the New York-ish wood oven style I ate as a kid. So here’s the plan: Italian Saputo Biscotto floor on one side and American brick on the other. Build a fire on the right for Neapolitan style or build the fire on the left for a more American style pie.

I put some drawings up on the pizza forum and no one came out and said it was a stupid idea so I’m going for it. I already ordered the Italian Biscotto. The last I looked they were in Tennessee and due to arrive in Albany on Thursday…All 160 pounds of them. Yes, I basically mail ordered a large box of rocks.

I’ve been enjoying the build. one of my favorite parts was when I was checking the fit of a few blocks over those angles and my daughter Allison asked if she could help. Geared up with hearing and eye protection, she helped cut and tap out a few of the knock outs. I wonder if she’ll want to stack some bricks.
Posted by Jon in Albany at 8:44 PM