The end of an era - No more steers

I am no longer a pretend part time cattle rancher.

This past spring was the last go around with the butcher - who jokingly complained he wouldn't be able to take a vacation without our business.

But now it is finalized - all of the fence is down and most of it is for sale.

I still believe the experience - even with its unintended impacts on my wife, my sister-in-law and my mother-in law - was a positive one. I wrote about the experience a few times, probably most extensively here at All Over Albany.

Like Rome, this fence was not built in a day. It look a long time. Way too long if you asked my father-in-law. Other than the pipe that was used as fence post, all of the locust fence post was cut and stripped. There was an auger that went on the back of the tractor but there was plenty of post hole digger work (I have actually become pretty good with a post hole digger). And the back filling...my fore arms hurt just thinking about tamping dirt back in the holes around the posts. Father's day was for all day weed whacking, a tradition like no other. But the fence held. We never had a breakout. 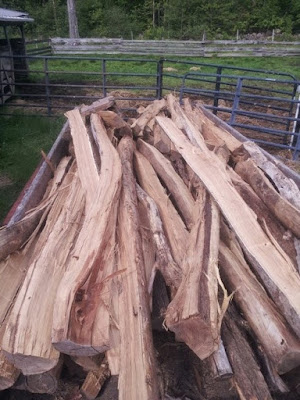 The fence was sheep and cattle fence stapled or wire tied to fence posts. Corners were mostly large pipe braced up with more fence posts. About 2 feet above the ground there was a line of electric fence and at the top, there was a single row of barbed wire. The field was about 5 acres. The red line is for the most part what came down this weekend. 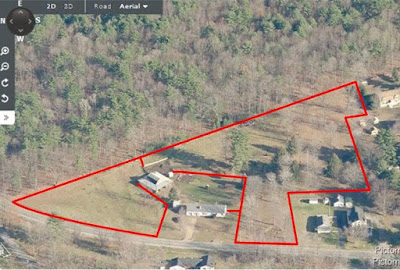 My brother-in-law had last week off, so I took Thursday and Friday and the fence got taken down. Most of the electric was already down so each section started with the barbed wire which meant cutting a staple at each post and the very carefully coiling up the barbed wire. We got poked a few times, but no one was cut badly. The El Cheapo 3 pack of Harbor Freight welding gloves eventually fell apart, but they served their purpose of protecting hands and forearms. With the barbed wire down, it was time to really start cutting staples to free up the metal fence. There were a lot of freaking staples. It was easy to tell which sections of fence were built first be cause we went a little crazy with the staple gun. The gun has kind of a hair pin trigger and one could easily put 5 staples where one meant to put a single staple. Once the fence was off the posts, it needed to be rolled up. A full roll is 330 feet. The fence got pulled straight with the tractor and then it got rolled up. To get a tight roll on the fence, we started on our knees, slowly inching forward until there was enough fence to hunch over. I think rolling the fence was the worst part. There was also post removal, bringing the broken post to the dump and a final cleaning of the barn.

It was the kind of weekend that proved I was just a farming tourist. No where close to the real farming deal. Those men and women are hardcore.

And a huge thank you to the two wives who were reluctantly dragged into this. They were a tremendous help this weekend.

Add to Anti-Banner
Posted by Jon in Albany at 7:57 PM