Pretty much every year we pack up after Christmas and head south to Maryland to spend New Years with friends. It's a tradition. Over the years, I've altered the route slightly to avoid the New Jersey Turnpike. If everything goes well, the Turnpike is about 15 minutes faster. But if there is any form of delay, it can quickly turn into hours slower...ask me how I know.

The newer route ventures off into Pennsylvania goes through Allentown, Bethlehem, Lancaster and York before taking a left and heading straight into Maryland down I-83. If you've ever spent time poking around the the forum at pizzamaking.com, you've seen a post by Norma427. She's the forum post leader with over 25,000 posts. And they aren't all "Hi, welcome to the forum" posts. They're serious pizza experiments and tests. This lady is seriously into pizza. She's a bona fide pizza forum legend.

A little east of York, Pennsylvania is a town called Manheim. In Manheim, there is a place called Roots Market. Every Tuesday, there is a big combination flea market, antique sale, farmer's market and auction. It's all day. It's massive. Huge like if the Troy Farmer's Market took steroids and HGH and did nothing but workout in a gym for 10 years...I don't think it gets this big. Here's an aerial shot off Google maps.

Big, right? And that's only one of the markets like this in the area. There's another one on a different day. Once your done being distracted by how awesome this market is and thinking that you would come here weekly if you lived within 50 miles (it's open from 9 to 8 in the winter and 9 to 9 in the summer), it's time to get serious. Inside one of those permanent buildings, Norma has a pizza stand. However, Norma's Pizza is only open on Tuesdays.

For the past few years, I have driven through this this area twice annually. But never on a Tuesday.
This year, we were going to break up the trip with a stay in a hotel. The kids love staying in a hotel and figured we'd find one with a indoor pool so we could take a dip too. The original plan was to split the drive in half...or... we could do 5 hours one day and 1 hour the second day and go to Norma's. My family graciously humored me. And in the end, a long drive followed by a short drive was the way to go anyway.

I got to meet Norma. Here she is in her shop. 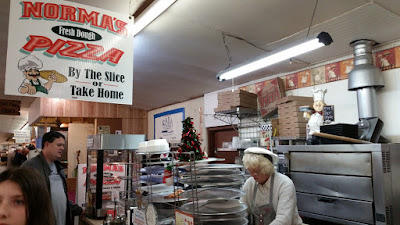 We started talking, I introduced myself by screen name and I was quickly invited back to stretch some dough and make pizza. 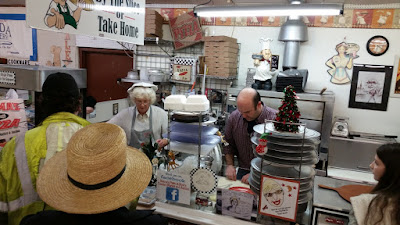 Norma's main pizza is a boardwalk style. After the dough is stretched, most of the cheese goes on, the sauce is put on in a spiral and then the rest of the cheese gets applied. I tried to copy what she did, but I hesitated with the peel during the launch and made a big football pizza. I had never worked with a dough ball that big. It was definitely different than the 14 inch pies I make at home. 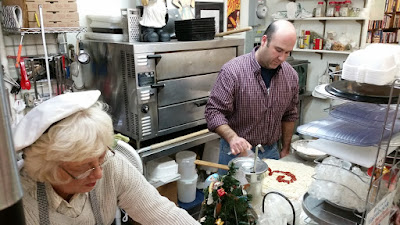 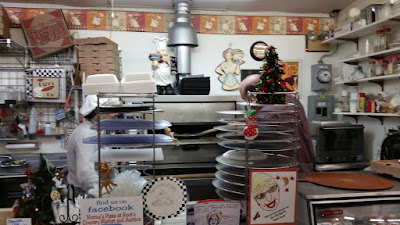 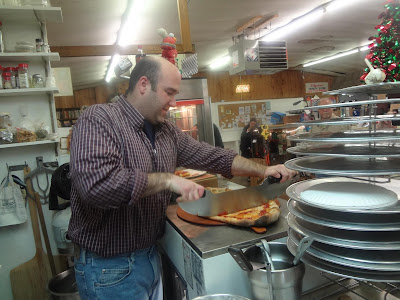 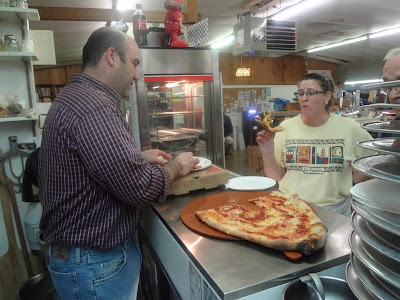 My second attempt came out much rounder. 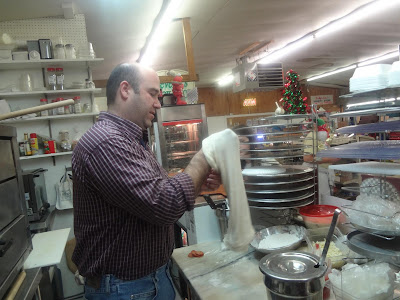 My kids were extraordinarily impressed. 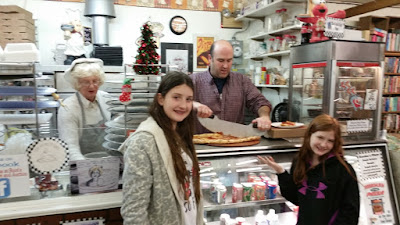 Besides the boardwalk pizza, Norma makes a Detroit style too. It's a thick pizza made in a small pan. The cheese goes on first and then after a little baking two stripes of sauce go down the middle. The cheese at the edge of the pan gets crusty and delicious. I don't have a picture of the Detroit, I was too busy trying to stuff it in my face.

Adam Kuban writes up an annual list of pizzas "that haunt my dreams." Norma is working on a hybrid that uses a sourdough starter for flavor and yeast for leavening. She topped that experimental dough with here typical boardwalk sauce and cheese but added homemade sausage then fished with some shredded spinach. 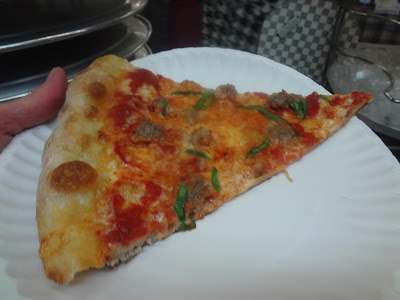 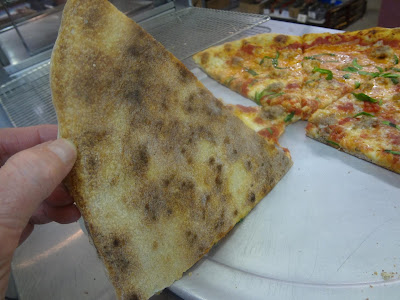 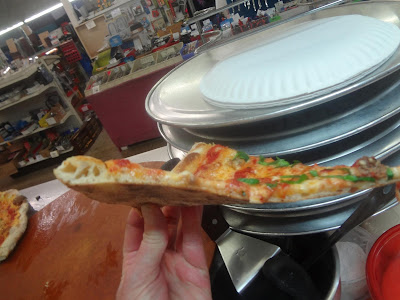 This pizza haunts my dreams. That was an amazing slice. I've already ordered the same starter culture she was using so I can start trying to duplicate it.

It is always great when you get the chance to meet people you admire.We could have talked pizza for another few hours, but the market was closing and the kids wanted to jump in the hotel pool before bed. I'll have to look at the calendar for next year. Everyone is game for adding a visit to Norma's to the annual trip. 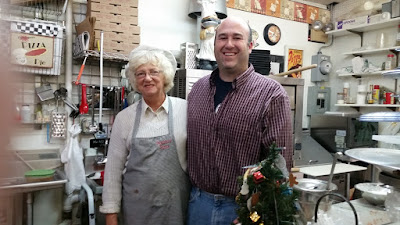