Pizza Tour and a Milestone

I checked in at a handful of sites for work last week. When I parked the car on Friday, I had driven just over 1000 miles. I don't know how truckers do it constantly. There's something about that kind of road trip that inspires absurdly unhealthy eating patterns. At least in me.

On the first day, I had to be in Corning before lunchtime. I made it, had a meeting and found out my second stop near Olean had been pushed back an hour. Time for lunch. There were two well reviewed pizza places on Yelp. Both were just a few miles away and I thought the pictures from one looked better than the other so off I went for a slice at Aniello's. 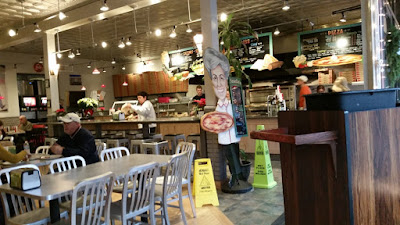 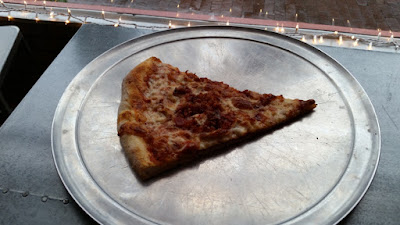 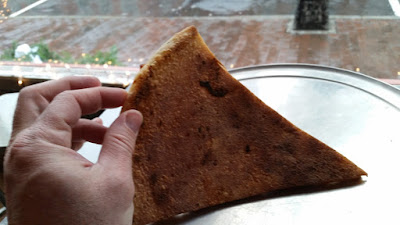 Nice place. OK slice. The crust didn't have much flavor. The next morning, there was snow on the ground and I drove around the Southern Tier almost out to Jamestown. I also managed to get lost and that added a few miles to the drive. When the sun set, I was in Buffalo. I've run into OG Woodfire Pizza on Twitter and the pizza forum. When I found out he was going to buy at a small neighborhood holiday event, I knew I was going to have to stop for a visit.

I got up to the truck and ordered a maple-pancetta pizza and started chatting while Jay went to work. Once we started talking he said, "Wait. What's your screen name?" And when I told him he invited onto his truck. We nerded out talking about pizza and ovens for almost 3 hours while Jay made pizzas for customers. It wasn't busy, the weather wasn't really cooperating with a cold wind and sprinkles. When a customer ordered, Jay said, "OK, give me 4 minutes." A little under 2 minutes to make it, a little under 2 minutes to cook it and the extra time was used slicing and boxing the pie. 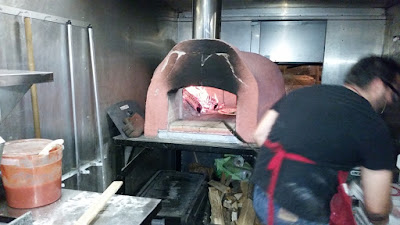 During my visit he also invited me to make a pizza in the oven. I could hear Howie Rose: "Put it in the books...December 3, 2015: Jon made a pizza in a wood fired oven." And yeah, even though I need to work on my turning peel skills, it was pretty awesome. Still smiling.

There it is. My first wood fired pizza. 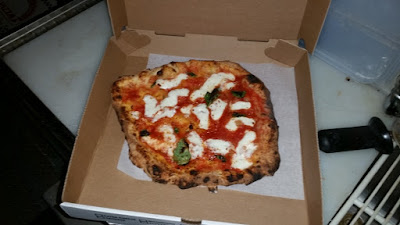 After I left the neighborhood party, I checked into a hotel and wrote out notes on how Jay made the maple/pancetta pizza. It's sweet and salty and cheesy and delicious and would need to be tried at home.

Since there is never enough pizza, I had read that Lovejoy Pizza made a classic Buffalo style pizza. I had followed a few threads on people trying to duplicate this style and was curious. So off I went with my friend Kevin to get a Buffalo Style pizza. It seemed like most Buffalo style pizza was cheese or cheese with pepperoni. We went with pepperoni. I ordered it and was told 20 minutes. This struck me as a little odd. I certainly wasn't expecting the 4 minutes of OG Woodfire but I figured closer to 10. Turns out Buffalo style takes a long time to cook.

While we stood there, I looked around. The place is also know for their wings and I think everything in the shop is coated in a layer of grease. There was a fan pointed at the grill station that was just gross. The only thing that wasn't greasy was the large TV showing the Thursday night football game. They should close for a day and have a cleaning party.

Cleanliness aside, it turns out I don't like Buffalo Style pizza. The dough was oily and flavorless. The sauce was really sweet (although almost all red sauce I have had in Buffalo is on the sweet side). The pepperoni is OK but overall, this was that bland, bready pizza you would expect at a kid's birthday party in a bowling alley. If this is classic Buffalo style pizza, I'm out. 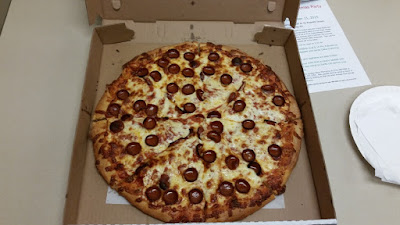 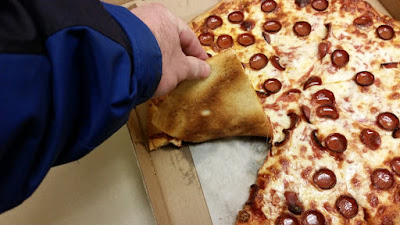 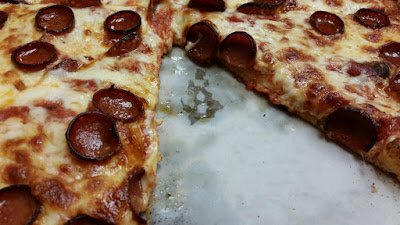 I got back to Albany on Friday afternoon. One of my kids wanted to have a friends family over for pizza this weekend. I had wanted to try something new with my current dough recipe so I made a batch of dough Friday night. Friday night I mixed everything (using a lot less yeast) and did a little kneading. Then I covered the dough and left it in the basement instead of the fridge. About 64 degrees instead of 38. On Saturday morning, I portioned the dough, balled it and put it back in the basement. I made 8 of the doughs for dinner Saturday and left 4 in the basement. Sunday afternoon I cooked up the rest of the dough balls.

I had to give that maple/pancetta pie a try. There are a few things I think I could improve on my technique with the pie, but it is delicious. Definitely adding it to the rotation. 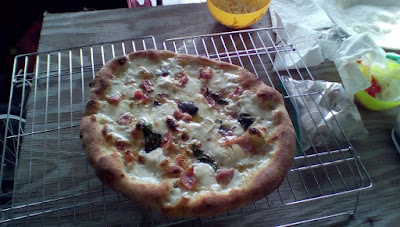 I'm only going to eat salad tomorrow.
Posted by Jon in Albany at 1:01 AM