Several years ago, we spent a summer fencing in the yard at my in-laws. The fences turned the large 5-acre lot into three pastures and a corral near the barn. Ever since the fence was completed, there have been a few steer (castrated bull) eating roaming around. For the most part, they are pretty low maintenance. Keeping the fence in good shape is the hardest part. Sometimes they use the fences posts as back-scratchers. That almost never ends up well for the post.

Just over two weeks ago, our butcher visited. About two and a half hours after he arrived, we were weighing sides of beef at his his shop...and it is a 20 minute ride to the shop. A skilled butcher's knife skills are truly impressive. I am amazed every time I see a large, probably 2500 pound or more, steer go from walking and breathing to four beef quarters in about an hour. About 50 minutes before this picture was taking, this steer was eating. 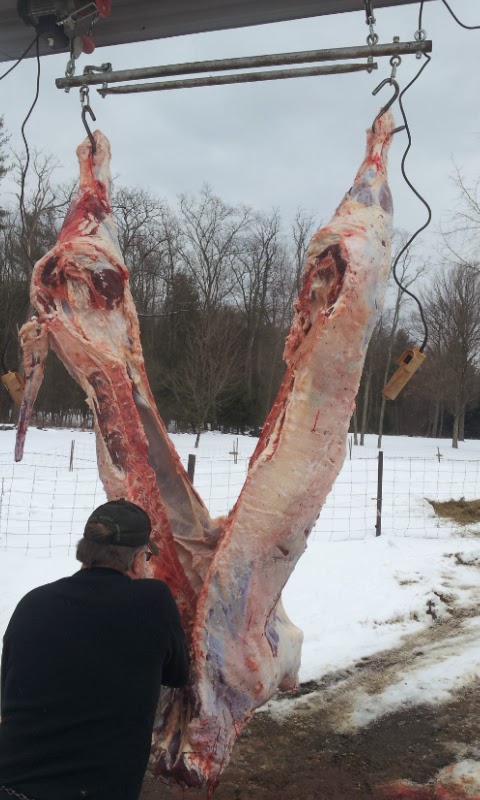 Probably less than 10 minutes after the photo, there were four pieces, quarters of beef in the back of a pickup truck. Here is a view of the truck with a little over 2500 pounds about beef ready for the cooler. 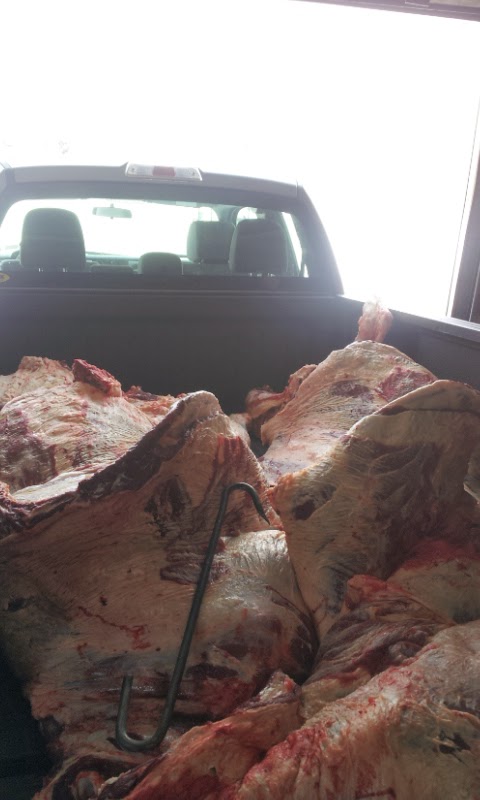 After two weeks of drying in a walk in cooler, we went back to the shop to butcher the beef. Well, the butcher actually does all the work. Our cattle is divided among four families. Each family has their half of steer butchered however they want it. You want this as steaks or a roast? Those kinds of decisions. The butcher does the cutting, and then we do the wrapping. First in freezer paper at the shop, and then in vacuum bags once we get the beef home.

The butchering takes two hours per side of beef. So basically by himself, this guy can break down and wrap an entire steer in about 4 hours. We're really there for the decision making. If we wanted to skip it, we could fill out a form and get a phone call telling us to pick up the beef. Most people do it that way. Although our wrapping skill definitely provide him some comic relief. He is infinitely better at it then we are. I can't stress enough how amazing this guys knife skills are.I snapped a few pictures of him breaking down a section of the hind quarter. Quiz time: Can you see what cut is about to come out of the part closest to the knife? All of these photos were taken in less than 90 seconds. 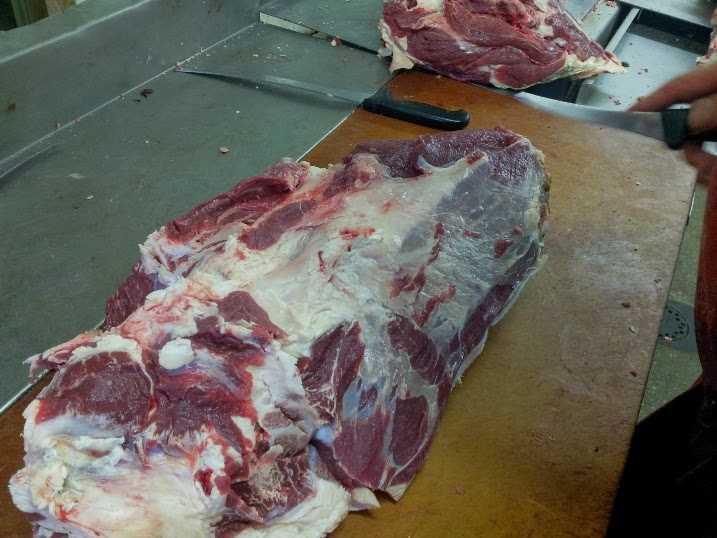 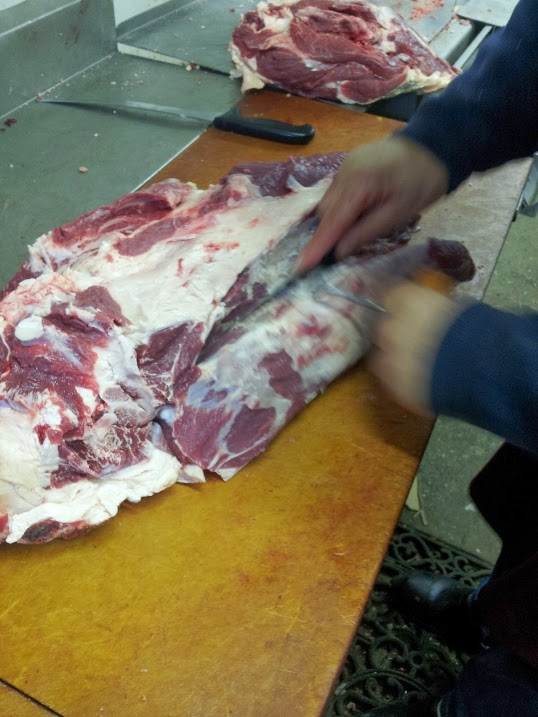 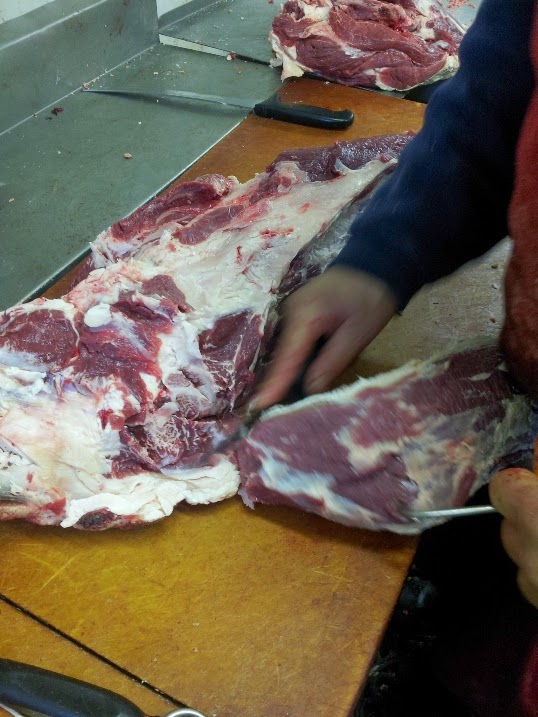 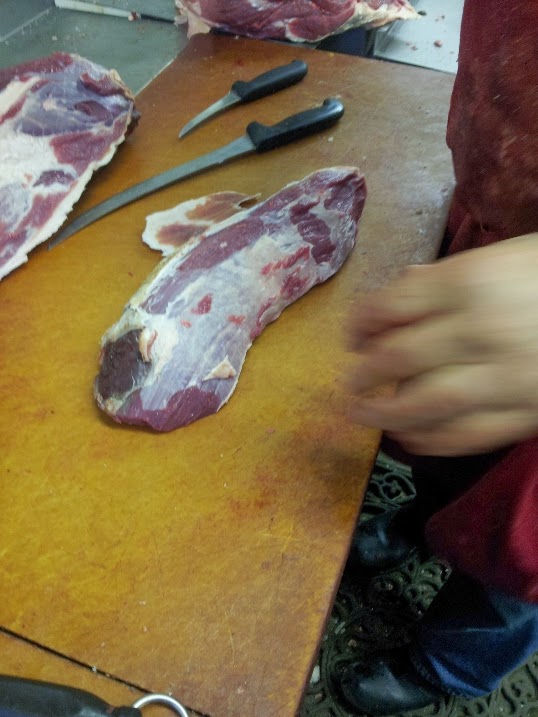 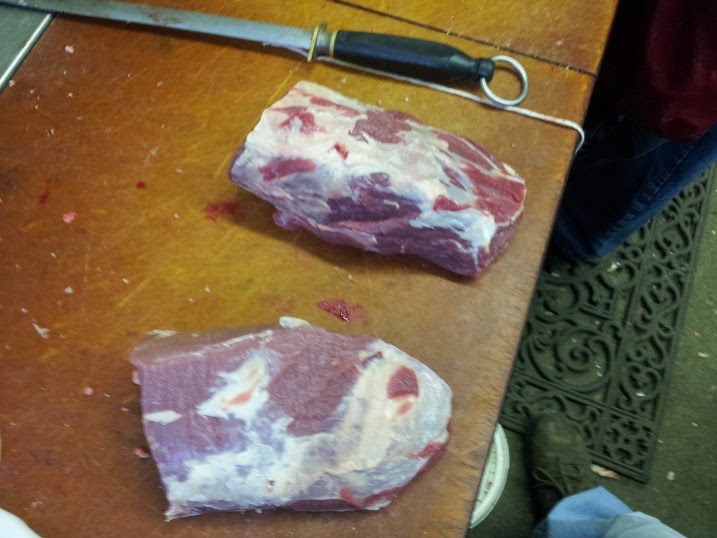 Just like that, two good sized eye round roasts.

I've said it in the past, this experience has really changed the way I approach food in general, especially meat. And after watching a butcher expertly practice his craft, I really need to get my knifes sharpened.
Posted by Jon in Albany at 11:33 PM