My first visit to a pizzeria is almost always filled with the hope that I have found the pizza I grew up eating. No matter how often I am disappointed, there is always hope. The comparison of the pizza in front of me to the long gone pizza from The Brick Oven in Bridgeport, Connecticut probably happens more often than it should. Over the past few days, two pairs of things are readily comparable. The first was by design, the second just kind of happened.

Soup
While I really like Pho, I am certainly not an expert. I have had it from exactly 3 Capital District restaurants, mostly from one place because it is the most convenient for me and I would argue that a weekly bowl of pho last winter kept me healthy while everyone else in the house sniffled and coughed. I have no preconceived notion of how pho should taste. I don't know the traditions of how it should be served or what a great price on a bowl is. To me, it is just a bowl of very enjoyable noodle soup. So this compare/contrast is strictly based on personal taste.

On Thursday, I was near Kim’s on Madison Ave. I had read about Kim’s in a Times Union review, All Over Albany and another write up at Chopsticks Optional.  The restaurant is in certainly nice enough, nothing fancy. There was one other table of 6 having lunch when I arrived. Out of several options of pho, I went with the brisket, eye round and beef meatball combination. 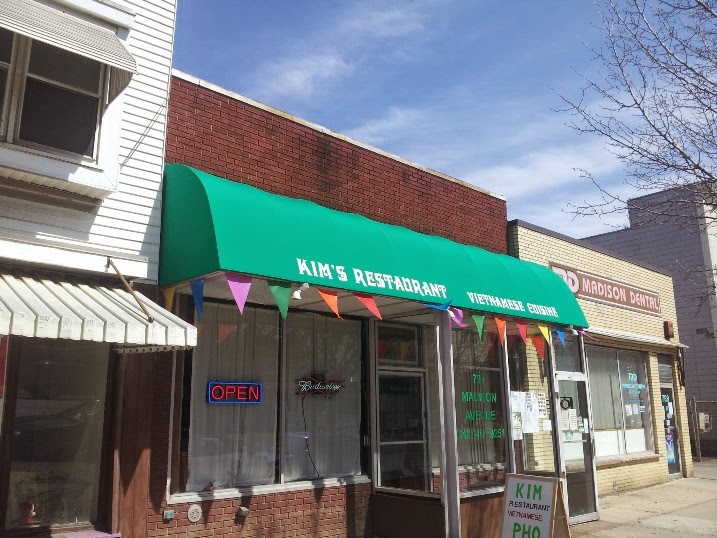 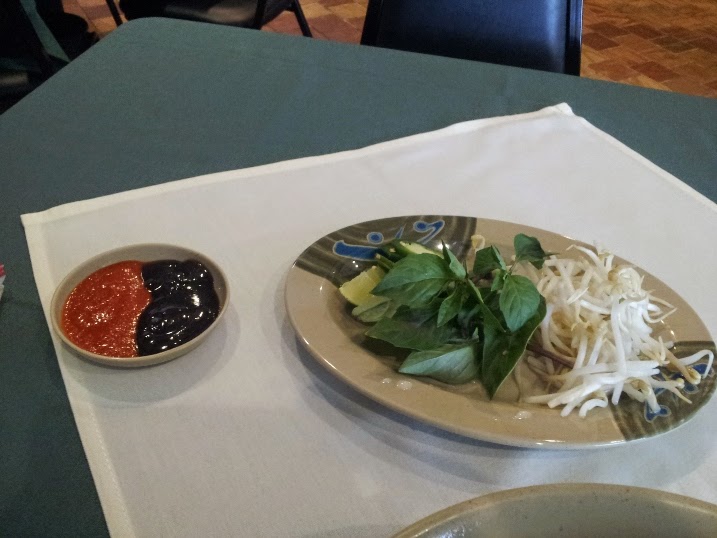 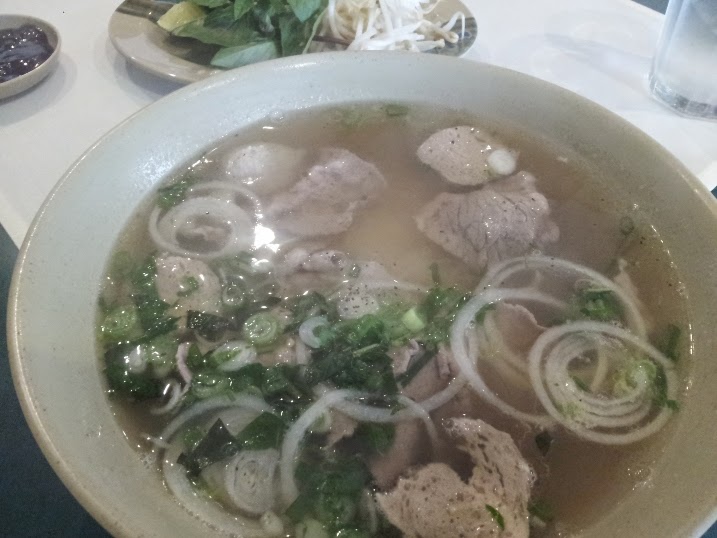 It was good. I thought the broth was a little thin. From memory, this bowl of pho seemed similar to the bowl I had at Saigon Spring in Clifton Park when the restaurant opened (my one and only visit – don’t get to Clifton Park often).  In my mind, I though I liked my usual bowl of pho better. But I hadn’t had a bowl of my usual pho in awhile…which brings us to Friday’s Lunch at Pho Yum. 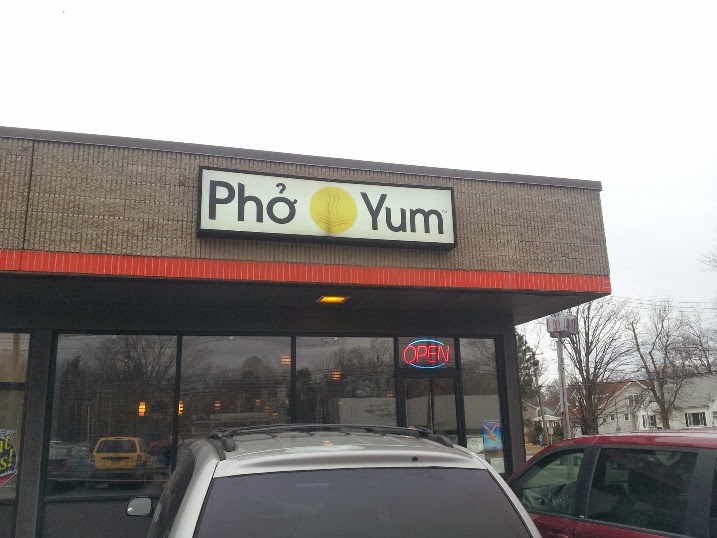 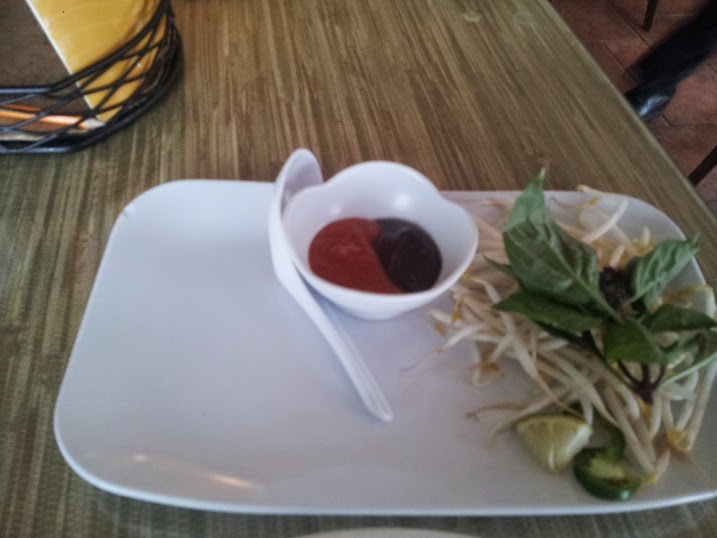 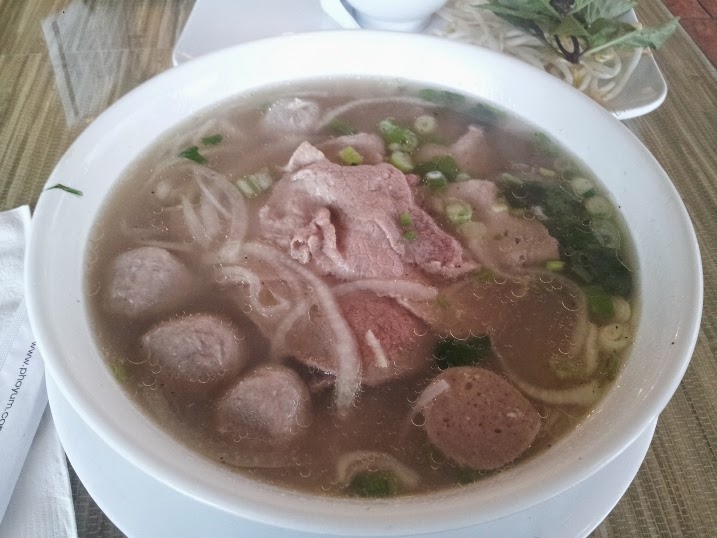 Last year, I ate enough bowls of pho at Pho Yum to be recognized when I visit and I am expected to get a bowl of pho with beef brisket and a glass of water. When I arrived on Friday, the restaurant was full. I counted 17 people in the small shop. Luckily, I snagged a seat at a table that had just been vacated. And you’ve got to give Linh (the owner and keeper of the front of the house) credit, I haven’t been there in months and she still recognized me and knew my order. To compare apples to apples, I switched up my usual brisket order to the Pho Yum - any three meats - and got the same brisket, eye round beef meatball combo I had on Thursday. The base of the dish is the broth, and Pho Yum’s broth had more flavor and more gelatin/body to it. It also had more fat. Not sure that’s a bad thing though. Here’s how I’d score the fight:

Broth: Pho Yum’s was better.
Noodles: Pho Yum’s had better texture.
Eye Round: Draw – the eye round was pretty much the same.
Brisket: I liked Pho Yum’s. It had some fatty, crunchy pieces. If you’re into that, Pho Yum’s wins, if not, you’ll like the brisket at Kim’s better.
Meatballs: These aren’t Italian style meatballs. They’re light, kind of spongy meatballs that are pretty damn tasty. The meatballs at Kim’s were better.
Sides: Draw. They are pretty much exactly the same. I don’t add the siracha or hoisin to the soup. I like both sauces, just not in my soup. The jalapeno at packed more punch, but that is going to be pepper to pepper anywhere.
Cost: Both portions were enough, but the portion at Kim’s is noticeably bigger and slightly cheaper. This pho at Kim’s was $8.95 and it was $10 at Pho Yum (before tax and tip).

In the end, I would like to try many things on the menu at Kim’s, but when I’m looking for a bowl of pho, I’ll spend the extra buck at Pho Yum.

Stage
This weekend turned out to be a weekend of musical theater. High School musical theater. On Saturday night we saw Footloose. Sunday afternoon, we caught the afternoon matinee of Oklahoma! Both plays were pretty well done. Both plays had some pretty good laughs. The crowds at both plays gave the cast standing ovations. But let’s score the fight:

Orchestra: the musicians at Oklahoma! were better.
Vocals: the singers at Oklahoma! were better. The kid that played Curly could really sing well.
Set: the set at Oklahoma! was nicer.
Cost: Draw – same price. At face value, for less than a single ticket to see The Lion King at Proctors, a family of 4 can go see a high school show and buy baked goods during the intermission. Sure, there’s some drop in production quality, but in terms of enjoyment I don’t think that drop is a factor of 4. For both plays, two kids and two adult tickets were $44. For the four of us to see the Lion King, it was well over $200. Given the choice, I think I’d rather go see the high school play. In my book, "Let's Hear it for the Boy" trumps "Hakuna Matata."

In the end, I wished the school that did Oklahoma! put on Footloose. After all, no matter what you do to it, the play Oklahoma! is still Oklahoma! and I’d be ok with never seeing it again. Even though the song “Oh What a Beautiful Morning” has been rolling around in my head. It’s a change from the barrage of One Direction songs my daughters subject me to... but not all change is good.
Posted by Jon in Albany at 12:31 AM