With the help of a very generous mother-in-law (she took the kids), my wife and I headed to Boston for a kind of college reunion weekend.  The people definitely attending were Dan, Joe & Adrienne and us. This is the core group of Toxic Friends. Everyone should have Toxic Friends. They are the friends who consistently enable you to eat too much, drink too much and generally over indulge. We were lucky and got to see everyone one the maybe list for the weekend too. We saw Chuck & Vic with their two sons, although the visit with Vic and the boys was short. Chuck's oldest is son is quite proud that he is taller than his father and that was fun to see. Jeanie also bused in for an afternoon and I haven't seen her since we ended up vacationing at the same lake two summers ago.

In an odd turn of events, it seemed to be a double play weekend. Ot of all of the places in the city, we went to two places twice. The weekend started with meeting Joe and Adrienne at the hotel, The Intercontinental - an insanely nice hotel. From there we wandered into the North End for lunch at Gennaro's, just a few doors up from the old Paul Revere House. Good food, good wine, good friends. What a great lunch. It is important to note that just before this lunch on Friday afternoon was the last time I felt any kind of hunger until lunchtime today. Not that it stopped me from eating...One of the lunch options were various kinds of meatballs. At the waiter's recommendation, I had the eggplant meatballs and was treated to what was probably the best eggplant parm I've ever had. We were looking at desserts and ordered a vanilla bread pudding with caramel sauce (insanely good) and I ordered a limoncello because I'd never had one and why not? It was ok, doubt I'd pick up a bottle anytime soon. The manager told us that they just got a delivery of a type of grappa that was better than limoncello. The bottle looks like this. 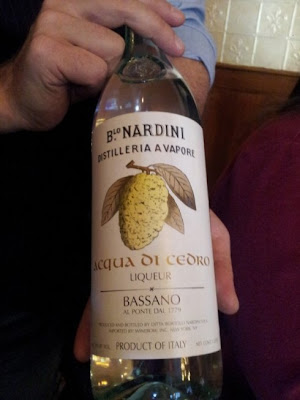 This stuff is good. Really good. I took the picture so I could find it somewhere. Joe and I each picked up a bottle of it at a North End liquor store. I couldn't find it online at Allstar or Empire. I'll chill it for Thanksgiving. After the lunch, we roamed, then napped and met Dan to go out for the evening. We went to a pub, had a few rounds and some finger foods (still wasn't hungry from lunch) and then we went to Meritage. This is an old school hotel bar. Very formal service, comfortable couches and chairs and they keep bringing out munchies. Non stop munchies. Warm tortilla chips, mixed nuts (real mixed nuts - cashews, almonds, hazelnuts, Brazil nuts - like $7 a can nuts), and good pretzel/cheese puff snack mix. We ordered a few small pizzas off the menu and some onion rings. The pizzas weren't anything special but the rings were fantastic. And the guy next to us had an amazing looking fish and chips plate. Great little hideaway. Don't tell anyone.

The next morning, Joe walked over to Flour Bakery. I had read about it in Fine Cooking and they also beat Bobby Flay in a sticky bun Throwdown. Here's the bounty Joe returned with: 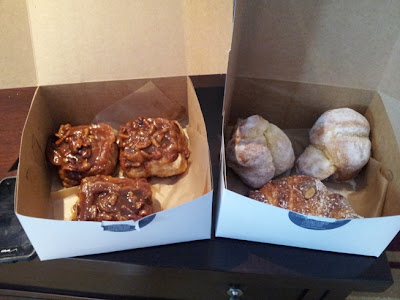 You've got the sticky buns on the left (very good), top right is a sugared brioche (I thought these stole the show) and then an almond croissant in the bottom right. Luckily we got these in our systems before we were hungry on Saturday morning.

The weather was very cooperative so we roamed and talked and settled on the Union Oyster House just outside of the Faneuil Hall area. Prior to being hungry, we ate some great oysters, drank Sam Adams Brick House Red which is apparently only on tap in Beantown, had kick ass clam rolls and Joe went to town on a lobster (his lobster has become a Boston Weekend tradition). Friendly waitress, many laughs, and another good time.

We went for another walk along the harbor, and ended up at a place called The Whiskey Priest. A lot of whiskeys to choose from, but the pours were a little light and the appetizer were weak. They had a corn fritter thing that was good, basically corn hush puppies, but the other food we had was pretty bad. It was still fun anyway. We regrouped back at the hotel for dinner and then headed back into the North End to return to Gennaro's. 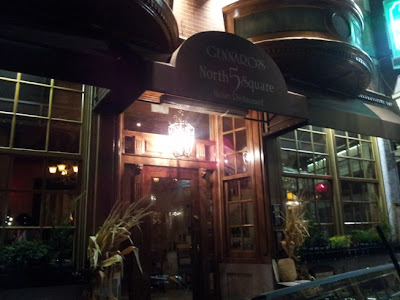 Great dinner. It had some minor flaws, but overall a wonderful time. I had the osso bucco dinner. Instead of a risotto, it came with some (I dare you to read this without drooling a little) homemade short rib ravioli. They were special.

The next morning we returned to Flour Bakery for some breakfast. We weren't the only one's with the idea of heading here Sunday morning. Coffee has to be good for me to drink it black. I drank it black here. We sampled a many more pastries. They were all picked over before I thought to get a picture. We had raspberry "pop tarts," sour cream coffee cake, egg sandwiches (with really good bacon), a cinnamon cream brioche and something else I can't remember. As with any bakery, some things were better than others, but nothing was bad. The couple at the table next to us had a very cute, loyal dog waiting patiently for them outside. Apparently they also bake dog treats so the pup knew what was coming when they returned.

From there, the weekend was coming to a close. We had requested a late checkout so we still had some time. We came down from our sugar high back in the room before driving back to Albany. I'm afraid to weigh myself.

I went to school in Boston for a few years, back when the Big Dig was just an idea. Now that most of it is done, Boston is a much better looking city. I'm looking forward to going back. Maybe we'll try more than just Gennaro's and Flour. The city has a lot to offer.

Happy 10th Anniversary Joe and Adrienne!
Posted by Jon in Albany at 11:52 PM