Tonight was a Girl Scouts night. So I did what every guy with a 90 minutes of tranquility in their own house would do: I made chicken stock in the new pressure cooker.

I followed the Modernist recipe that was part of the New York Times review of Modernist Cuisine. You boil a bunch of cut up chicken wings and then drain it. I think cutting the wings would be much easier with a big butcher's block and a cleaver. I used a pair of hand-me-down kitchen shears (Thanks Mom) and they kind of worked. The recipe also calls for ground chicken thighs. I added the bones from the thighs in with the wings. The rest is pretty straight forward. Onion, leek and carrot in the pot with some peppercorn and parsley. Mix everything together and cover with water. Pressure cook on high for 90 minutes. I boiled the bones in a different pot.  I also threw in some chicken skin. I think it was Chef Bob Del Grosso that talked about skin enhancing a stock. 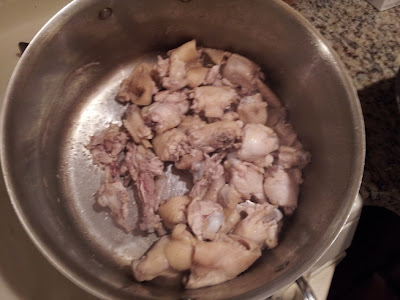 Put everything into the pressure cooker. 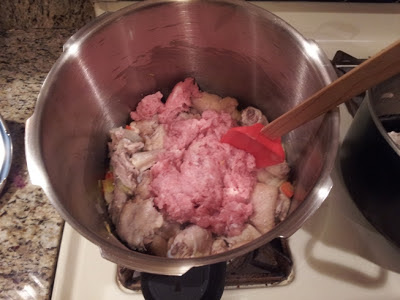 Which is prettier: the pot or the tile backsplash? Two red bars bars on the pop-up thingy means there 15 psi inside. I didn't want to mess around with this thing so I read the book. Not sure if you can see it, but the dial for the pressure cooker burner is turned pretty low. 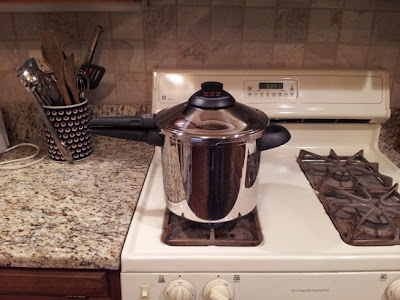 After 90 minutes at 15 psi plus the time it took the pressure to naturally drop, the vegetables and chicken look pretty spent. Hopefully it all went into the water. 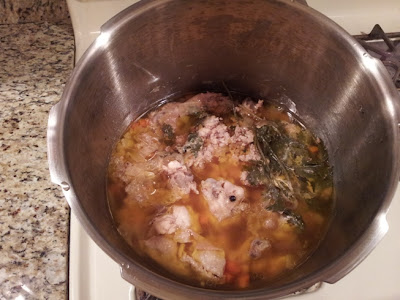 Here it is after going through some cheese cloth. Looks like it needs to have some fat taken out of it. The fat should solidify overnight. Tastes pretty good. Needs some salt, but that will get added later. 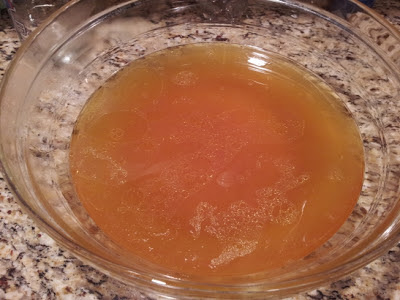 A good first run. Not sure I'd follow the recipe to the letter again. I think it would be cheaper to buy a whole chicken, use the breasts for dinner, and put the rest of the bird in the pot. I'll have to try some variations as I gear up for Thanksgiving.
Posted by Jon in Albany at 11:57 PM