Hope you had a good Thanksgiving. The meal went off without a hitch with the exception that I forgot to buy some half and half for the coffee after dinner. My bad. I am afraid I am going to have to change my tune. For years I had thought that cooking the bird outside opened up the kitchen and made life easier. Turns out, it doesn't. This was the first time I cooked the turkey inside (been doing it annually since 2001) and the time I spent babysitting fires and watching oil heat up became free time.

And I need to go get some Jacques Pepin books. That steam/roast method from the Times worked out very well. I always knew that guy could cook, but damn that guy can cook. I butter basted the bird instead of using his glaze. I wasn't sure all the guests would go for the glaze. Pretty sure I'd like it but I wasn't just cooking for myself. I thought the turkey needed some salt but it was pretty moist and tasty. I was even asked, "How did you get it so moist?" Next time (if the bird is thawed), I'll salt it a day or two in advance and then cook it using this steam/roast method. 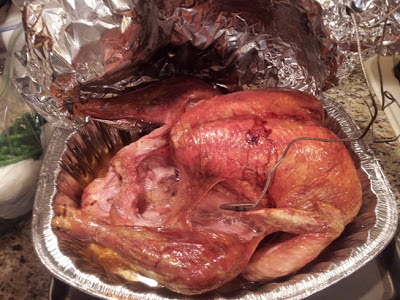