Left work a little bit early to come home and get the Modernist Bacon in the smoker. It went pretty well. I used a kind of half-assed Minion method but with lump charcoal. I lit a chimney of charcoal and let it get about 2/3rds lit. I add some unlit charcoal to the base of the fire barrel and then dumped the chimney on top. The recipe calls for a 170 degree smoking. My temperatures fluctuated at bit and i ended up controlling them by propping the smoker door open a little bit. To maintain the opening, I used a small rock I saw under the deck. I have never tried the Minion method with briquettes (I avoid using briquettes) and I think it might work a little better with the prefab uniform coals.I think I need to add a metal baffle to direct the heat down as it enters the cooking chamber. The past few times I used the smoker, I used a fire brick as a heat sink/shield.

I'm just about to light the chimney here. You can kind of see that brick I mentioned behind the piece of lump charcoal on the shelf. 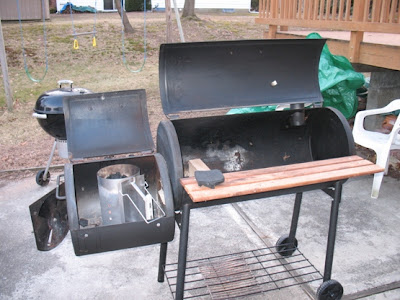 In goes the slab of Modernist bacon. It smelled pretty good. 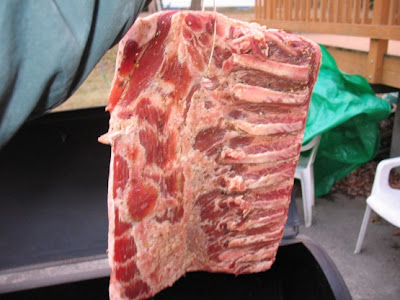 I had the temperature probe in the air near the slab of bacon. For the most part, I'd say this thermometer read between 160 and 180. Not bad. I was kind of busy during the smoke and babysitting the fire a little more would have helped too. 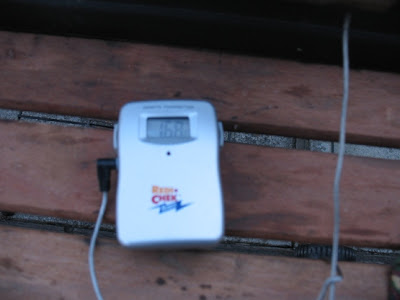 Here it is cooling before getting refrigerated. Looks good. I'll cut it up tomorrow night. I should weigh it to see if there was much weight loss during the cure and smoking. Remind me tomorrow. 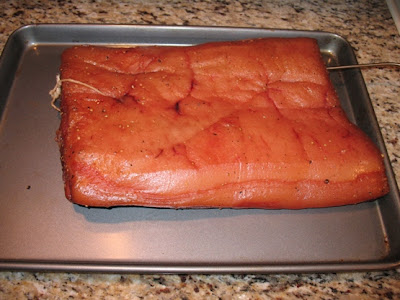 In kitchen news, we have plumbing again. I would have been a horrible colonist.  And the cars are back in the garage. I cleaned that up tonight. Anyone need some scrap Sheetrock?
Posted by Jon in Albany at 11:06 PM