For this project, I made duck confit. I've never had it but have been curious about it for awhile. The only problem of making it at home without any prior experience with confit is judging the outcome. I have nothing to compare it with. Plus, this past month has been crazy - school is in full swing, the girls are in a handful outside school activities, open houses, two trips to Buffalo, curling season is starting, the list goes on...And that is why this project just came out of the oven about two and a half hours before the deadline.

It all started with buying a duck yesterday. I got out of a big truck that I just drove back from Buffalo, got in my car and headed to the Asian Market on Central. It was the only place I could think of that would have a thawed duck ready to go. I didn't realize it until I got it out of the package, but the head was still on. Being so used to American headless chickens, the head kind of caught me off guard. 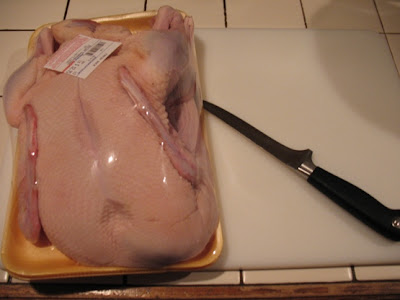 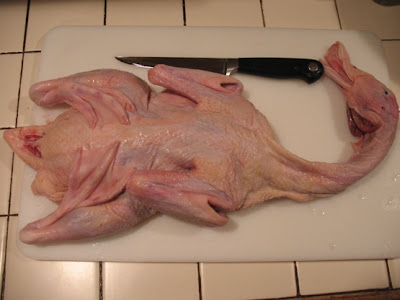 Although that experience with chickens paid off and I was able to break down the duck pretty quickly. There are three main piles on the cutting board. In the upper left corner of the board are the wing tips, feet and neck. Just below them on the left are the wings - each cut into two pieced. The two breast are centered up top. Just below them are the leg/thigh pieces. An the carcass is all the way to the right. The breasts got frozen for another time, the wing pieces and leg/thighs are going into the confit. The wing tips, feet are carcass are going to be made into duck stock as soon as I get to the store for some celery. 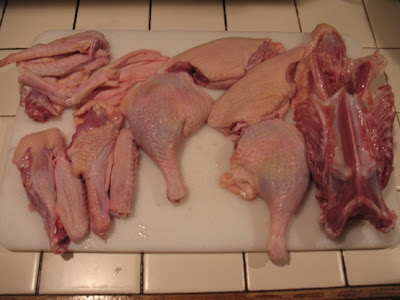 Following Melissa Clark's recipe (From the New York Times) I coated the duck meat with salt, pepper, thyme and a bay leaf. Then it went into the fridge for a little under 24 hours. 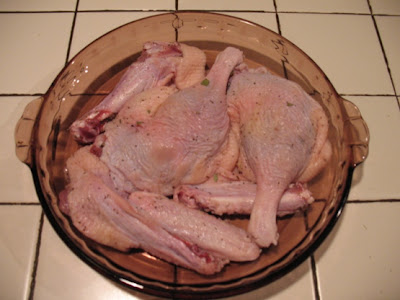 Earlier tonight, I put the duck in a skillet and started to render the fat. I added a little olive oil so that there was about a quarter inch depth of oil/duck in the pan. This was a misstep and I should have seen it coming. I started the duck in a cold pan without any oil because I was expect a lot of pat to come out of the legs. I should have preheated the pan, then added a little oil, then added the duck. The skin stuck to the pan. Oops. I just carried on and pretended it didn't happen. 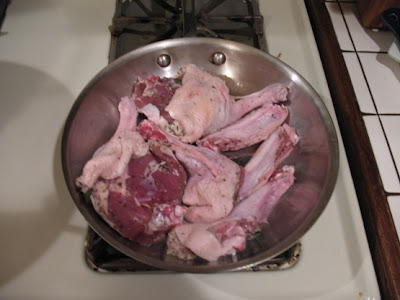 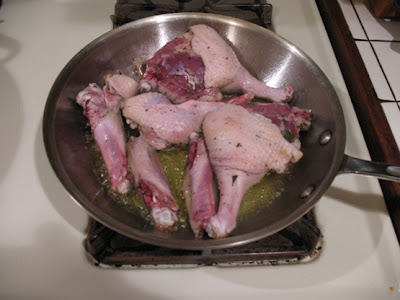 At this point, the house smelled really good. The pan got covered with foil and put in a 375 degree oven. A few hours later, I took it out and this is what I had. 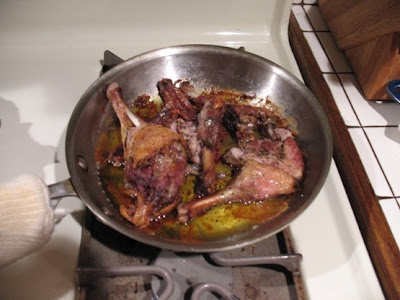 Luckily, 4 out of 5 dieticians recommend inhaling a few pieces of duck braised in fat as an after dinner snack. I've already eaten all of the wing pieces. Damn, they are good. The skin is really, really good. This is a technique that is definitely worth exploring. I have a few other duck confit recipes that I will have to try. I'm going to save the leg/thigh pieces but I don't think they are going to be around on Monday. And all done with a hour and 45 minutes to spare...piece of cake.
Posted by Jon in Albany at 10:17 PM