On two of the blogs I follow, the authors recently made their own granola. I hadn't thought much about it until I picked some up wandering through the "Healthy" section of a Hanaford market. It was pretty good. But it was one of those things I couldn't stop eating. Every time I caught the container out of the corner of my eye I took a handful and ate it.

So I went back at looked at the recipes on the blogs. Since I had strawberries and bananas, I went with this recipe from Ruhlman's blog. I dropped the brown sugar and used agave nectar instead.

Here's a bowl of oats, wheat bran, flax seeds and almonds next to a container of strawberries, a banana, honey, agave, little oil, cinnamon and some H2O. 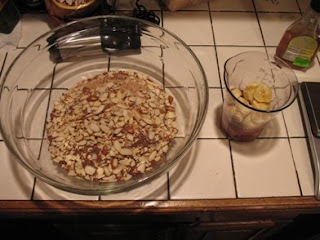 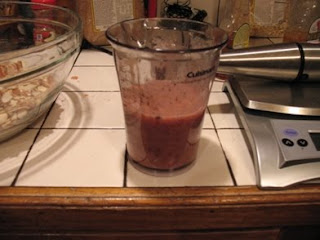 After everything was mixed together, it went on a half sheet and into the oven to dry. 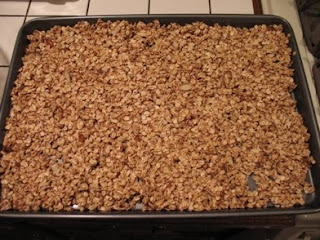 I mixed it every 15 minutes for about an hour. The house smelled good. Tossed in some dried cranberries and raisins. 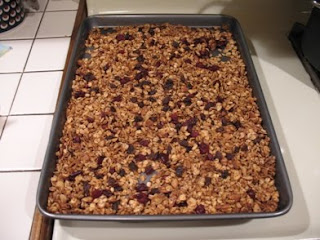 It is pretty good. You can taste the fruit mix but it isn't as strawberry-banana-y as I thought it would be. Definitely a recipe worth working on. Maybe add some other seed (sunflower or pumpkin) into the mix. Other dried fruit would be nice too. The idea of using a fruit puree to evenly spread around the oats is brilliant. Not sure who came up with it originally. This blog chain links it back to Nigella Lawson, but that might not be the beginning of the chain.

I still can't walk the bag without taking a handful and eating it.