Another Pizza Oven Update: Some Progress and a Counter

Looking back, the last oven update was almost a year ago. There has actually been some progress and last week, I made it one of the oddly self-imposed benchmarks warranting another update. We last left you with a topping party – the structure had a roof.

Next up was the soffit. Using scrap pies of 2x4s and 2x8s to have so wood framed into the metal. This was a huge pain in the ass and another reason portions of the framing would have been easier. Or maybe if I knew what I was doing I could have planned a little better. Had I known what I was doing, I could have raised everything roof-framing related up a little bit and then just attached wood to the metal framing in large pieces that could have been easily installed. Instead, I had cut pieces to length, use a router to cut a groove that the flange of the steel could fit into and screw in lots of pieces. It took a little while. Curse words were involved and I only recall one tantrum. 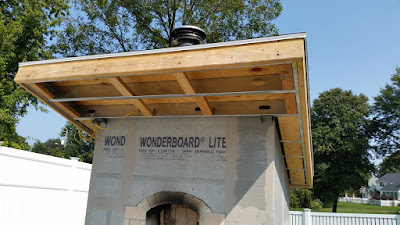 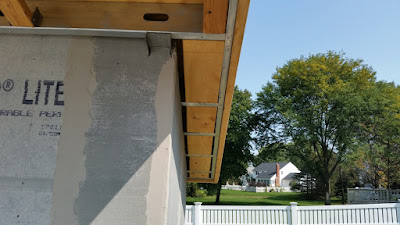 Here's a closer view and I'll try to clarify what was done. The closer end of the wood has a routered line in it so sthat the flange of the closer steel stud can fit in and the 2x4 can be flush with the bottom. The far end of the 2x4 is cut to length so it is snug and screwed into the the back steel stud. I don't recommend this method of construction
. 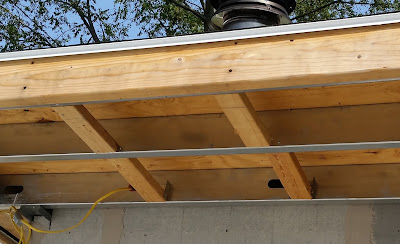 I found some tongue and groove pine boards at 84 Lumber in Guilderland. The people there are really nice and I think their lumber is a little better than you find in the box stores. I stained a bunch of the wood with a cedar outdoor stain that was light enough to show the grain. I put on two or three coats. With the steel frame, there was nothing to nail the first board so I countersunk a few self tapping screws to the front steel framing. I cut the next piece to length and made sure it fit. Then I laid out the centers for three holes for the lights. The wholes were cut out with I bit I bought that fit the lights. That board went up (I used a borrowed compressor/nail gun and Joe came back to wire up the lights. 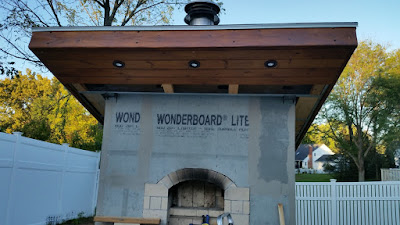 Once the lights were in, the rest of the soffit went fairly quickly. Boards were cut length, tapped into the groove of the previous board and nailed into position – nails go through the tongue/groove connection and into the wood I framed into the steel roofing system (if that makes any sense). Ran into a little problem when I got to the front wall because nothing about this project is square, level or plumb, but hoped some trim work would take care of it later. The shorter fascia sides went up very quickly. That was just cut, tap, and nail. I managed to cut a decent transition to go from the short side pieces back to full sized pieces at the back wall. All that is left there is one last piece to cover up the last inch. Nothing other than laziness is why that isn’t done yet. If you aren’t me, you probably wouldn’t have noticed that piece is missing. 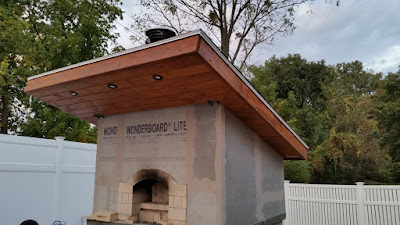 I wanted to over up the front before a bird thought that would be a good place to build a nest. The idea was to get a 2x6, use the router to hollow out where the steel framing would go and then put it up. It worked for the most part. To help hide the sins of the builder, I cheated a little. One end of the 2x6 is a little narrower than the other end. It kind of hides some of the not square, level or plumb. So that piece went on and I think it looks pretty good. 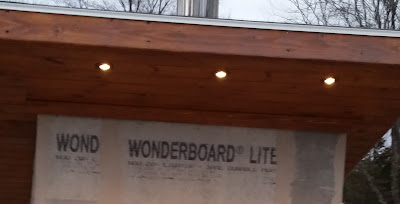 Next up was raising the counter in front of the oven. The goal was to make a flat ledge the was 1.25 inches below the oven floor. I used scrap pieces of 2x8 on the sides and a piece of scrap roof plywood in front. To over-engineer it and make it absurdly stronger than it needed to be, I drilled concrete screws into the existing ledge and left the out about an inch to act as a shear stud and connect the two concrete pours. I also put in some leftover wire mesh that I had from making the concrete ring around the oven brick. This was the last concrete pour of the project and it went the best. 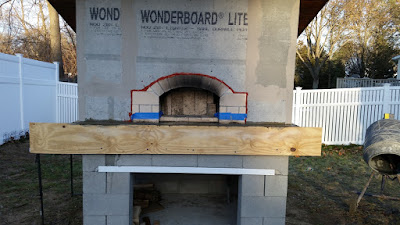 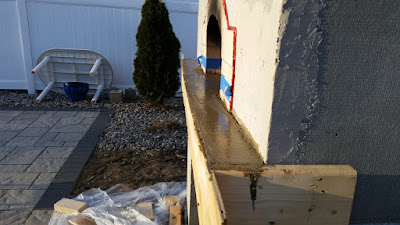 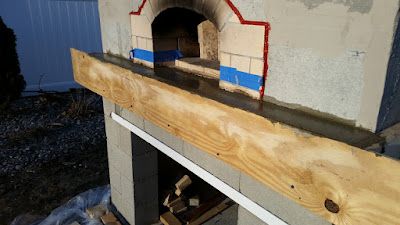 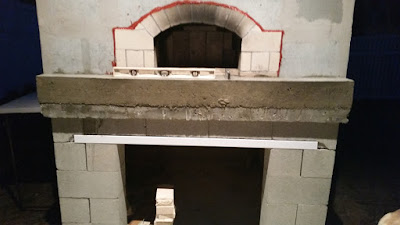 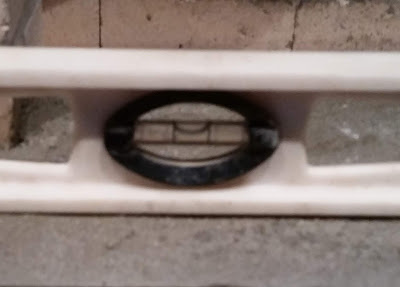 The oven door is coming along. I made a template out of wood and a friend who is good with a torch is making the door out of steel in his free time. He's pretty busy and on the road a lot for work but the door is coming out great. I made to panels out of scrap luan board. The smaller one will fit into the oven archway. The larger one will rest flush against the outside of the arch. The two panels will be two inches and will be filled with two layers of the insulation board that is under the oven floor. 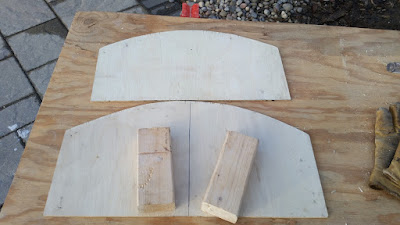 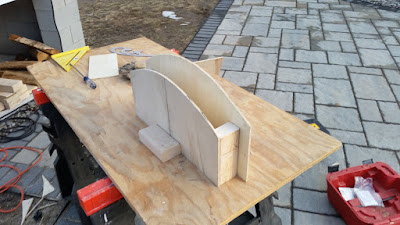 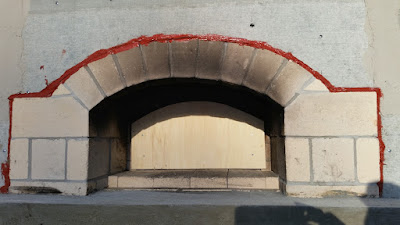 Here's what is made out of metal so far. All that is left is to make handles and weld those to the outer panel. Shouldn't be much longer.  I'm told when welding with the insullation already in place, it too over 45 minutes to cook down to where the door could be handled with gloves. Successful test of the insulation. 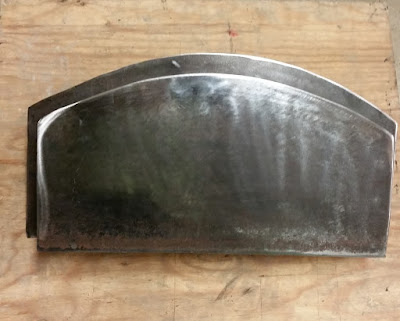 In the mean time, I have been stacking bricks as a door and messed around with a few residual heat dinners the next day. I have been dialing in making ribs, done a few loaves of leftover dough bread and this beast makes a mean baked potato.

Back in June, I contacted a Kitchen Counters Express in Latham to come take a look and give me their thoughts on the best way to put in a small counter.  After the initial visit, I went to their warehouse/workshop to pick out a piece of scrap that I liked (it’s not a big counter). I looked through all these pieces thinking that I wanted something light because the counter in in direct sun. I had taken temperatures with a IR gun of the concrete that would support the granite and it was in the 120-150 degree range. Kind of like pavement in the sun. I picked a light piece and drove off. I got about 2 miles away before having buyer’s remorse. If I went too light, I thought it would get lost in whatever finish I chose to cover the walls. So I turned around and went back. A very nice lady talked me down. Looked at a picture of the oven and recommended another piece. I went with that.

Unfortunately, my folder got misplaced and lost in the shuffle. I called back after not hearing anything for a bit and made an appointment to take more detailed measurements. The person taking the measurements was the same woman that helped me pick a color. Having seen it firsthand, she thought it would still be good. That was Wednesday. On Friday, the counter was installed. 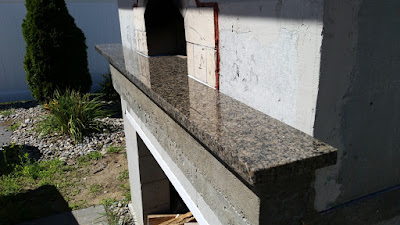 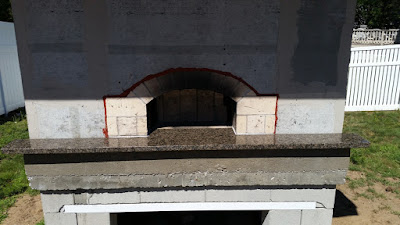 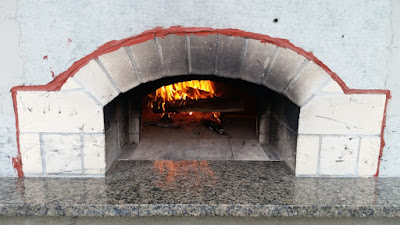 This counter was the next milestone. I’ve got to tell you, it is hard to take a day that could be spent messing around with different doughs and making pizza to finish the oven. I’m already talking myself into finishing the top have of exterior work and taking on the base next year. 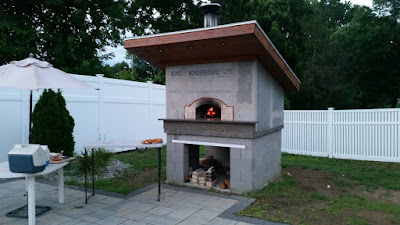