To paraphrase Ghostbusters, when someone asks if you want to blow off work for a pizza tour, you say, "YES!"

I almost didn't go on this tour. As the data approached, I knew I would regret missing it. My head is still kind of in a blur. It was total pizza sensory overload. Not just binge eating pizza, but the conversation and the people made the entire day unbelievably amazing.

On Thursday morning, I left the house around 6:30 in the morning to go meet people I had only either met or heard about online. I drove down to the Croton-Harmon Metro-North station, parked (paid for up until 3:00 AM because who knows?) and took the train to the 125th Street-Harlem station. From there, it was about a 15 minute bus ride to the first meet-up point of the day. A place called Mama's TOO! that I had seen popping up in pizza-geek Twitter/Instagram recently. I was a little early so I took a lap around the block. I was surprised to see the original Mama's a block from the spinoff. Not long after my lap, what I thought was a familiar online face showed up. But I was wrong. It was the familiar online face's brother. Oops. It was nice to put voices and faces to screen names I have been seeing on the pizza forum for years. And I've got to tell you, everyone was as nice and great and awesome in person as you could have hoped. So here's the pizza craziness that followed:

A crowd of pizza nerds shuffles into Mama's TOO! about 15 seconds after it opened. For the next 45 minutes we talked with owner and ate pizza. The same dough was used in the round slice pizzas as in the squares, but the squares...holy shit, they were amazing. Style-wise, the square isn’t exactly what I think of when I think Sicilian. Flavor and texture wise. It did remind me of a onetime visit to Emmy Squared (Detroit style). I thought the dough, especially in the square form was delicious. Even the way they had it rolled into a garlic knot was delicious.The owner was kind enough to give us most of the dough recipe. Recreating it is on my to do list. 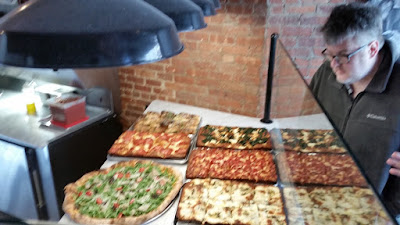 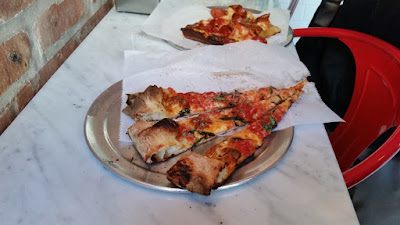 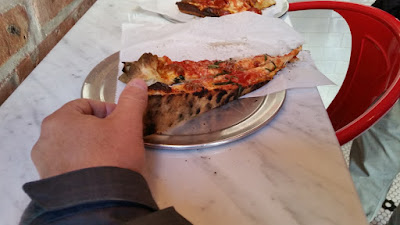 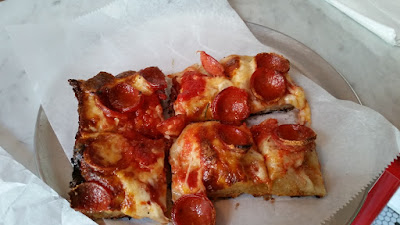 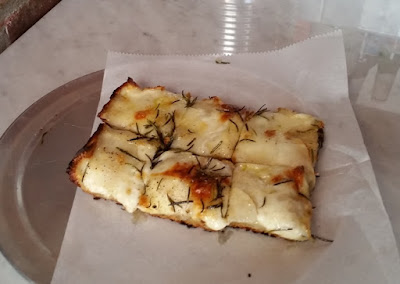 We spent too much time at Mama’s Too! So Sal and Carmine’s was dropped. We drove over to Sophia. The car ride was fantastic. Aside from getting to know two forum guys a little better, the pizza conversation was great. Flour, sauce, yeast, fermentation textures, cheese, mixing order (the owner of Mama's insists adding the salt late makes a big difference)…and it must have been going on in the other car too because there was a car-to-car phone call about yeast at Mama's TOO!. Birds of a feather were definitely flocking together on Thursday.

Parking was tough around our next stop, Sophia. We tried a slice, a square and a spinach dip slice. Nothing there was bad, it just wasn’t great or memorable. The spinach dip kind of tasted like creamed spinach (I'd argue Seagate frozen creamed spinach if you want to get specific about it). 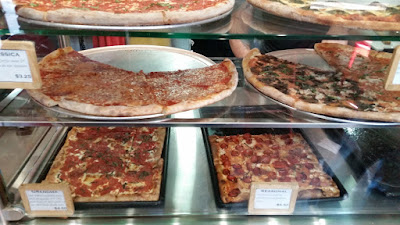 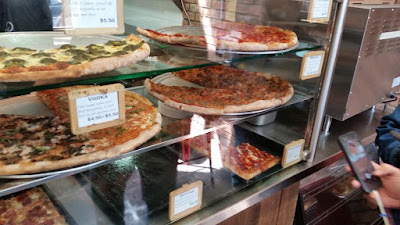 The spinach dip slice is in the upper left corner of the second photo.


From there we were off to Prince Street for the Spicy Spring. It was greasy delicious. Tons of pepperoni (the sidewalk outside is kind of littered with pepperoni that fell off  earlier slices) and I think the dusting of cheese that partially melts into the cupped pepperoni was great too. One thing to note was that we got two slices and cut them into three pieces each. I’m not sure I’d feel the saw way about the Spicy Spring slice if I ate a whole square myself. I could see the four bites of delicious slowly turning into a salty, grease bomb that haunts you for the rest of the day. Alas, I didn't get a good picture of the spicy spring slice and no one has put one up on the forum yet. So you are currently stuck with a crowd shot. 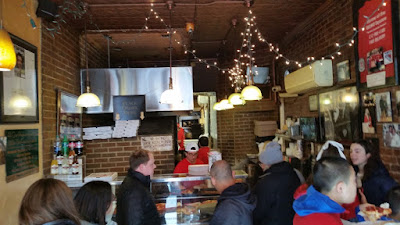 And we're moving...We headed off to L’industrie and got there a little bit ahead of schedule. A forum member whose screen name is quietdesperation and I took the opportunity to walk over to Best Pizza. We had a regular square and a pickled vegetable slice. They were both good. I thought the kale on pickled vegetable slice was really tasty. I had been to Best Pizza once before and it was alright, this visit was better. 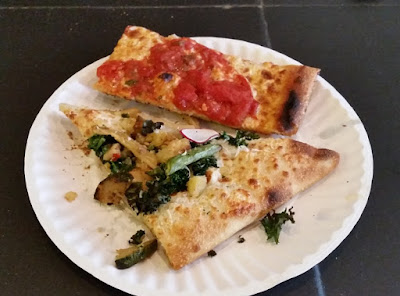 We walked back to L’industrie and joined the tour already in progress. Paulie Gee of Paulie Gee's and the soon to be Paulie Gee's Slice Shop and Mike of Mike's Hot Honey had joined the group. Not a take your breath away slice here. It was a little on the dry side and I thought they had used too much bench flour so there was still a little on the crust. That said about the slices, a table ordered a fresh pizza while we were there and it looked better than what was being served as slices. Perhaps L’industrie is a better whole pie/eat right away place than a slice shop. As I was late to this portion of the tour, I don't really have any good pictures, but the fresh burrata on this slice was beautiful. 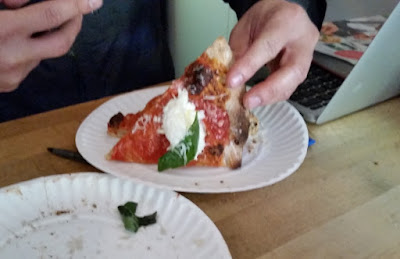 Next stop was the Big Ragu. They had a cool oven. It was gas fired with a rotating deck. The deck was spinning faster than I thought a rotating deck would go, but it is fair to say I know nothing about rotating deck ovens. We got the namesake Big Ragu slice. Just before if comes out of the oven some paper is put down on top of a paper plate and it gets a light dusting of confectioner’s sugar. That was a new one for me. The slice was then cut into bite sizes. We had a bunch of plastic forks to eat it. The slice was thick, doughy and I didn’t think it was good. It had overtones of something you get at a fair. Should you find yourself here, try something else. 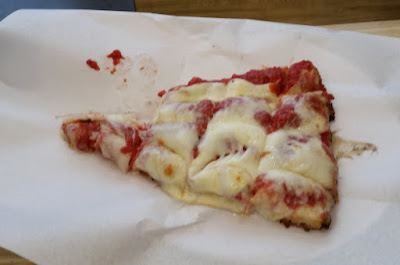 Then Williamsburg Pizza. I had stopped here once before when a work trip had brought me into the area and their grandma slice was the start of that mini tour. While I was there they were prepping their apple bacon slice and the topping sounded great but I had a few other places I wanted to visit and I was on my own so giving the apple bacon square a try was on my to-do list. I don’t know if the pie had been in the window too long or maybe I’m just wrong about the combination, this was a disappointingly bad slice. As people were getting ready to go Paulie Gee had just gotten his grandma slice. So I got to hang out and talk with Paulie and we split the slice. The grandma slice is still very good and worth getting if you are nearby. 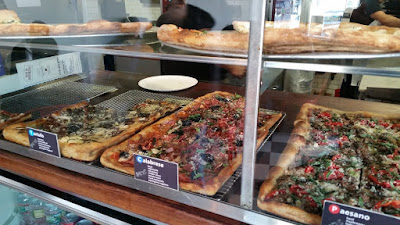 From there, Paulie and I drove to Sam’s to catch up with the group. That was another nice drive/pizza/pizza business discussion. I know where Paulie buys his cheese. He asked me not to tell anyone. I'm not telling. Walking into Sam’s is like stepping back in time. Sam is gone and the place is run by his son Lou who very much enjoys the joke, "Don't call me Son of Sam." I thought the pizza here was very good and just being there made me want to really explore the menu. There were not a lot of people in there and I can’t figure out why. The food looks really good and being inside reminded me of being a kid and walking into an Italian restaurant with my parents in the 70s. I’d very much like to bring a party of 8 or 10 here and try some of everything. Also, Paulie can’t get within a mile of the place without getting clams. 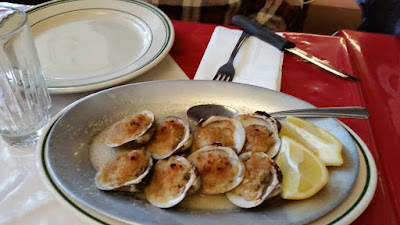 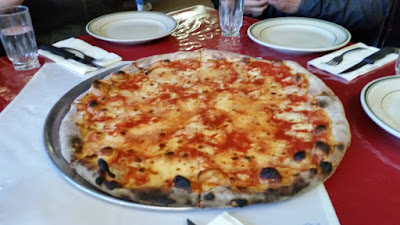 From Sam’s, some of us walked to Lucali, others drove. Walking there we stopped in the Court Pastry Shop. It smelled amazing in there. I was too full of pizza and there was still another stop so I didn't get anything. Quietdeparation had some did-not-buy remorse and headed back for some biscotti while we waited for a table at Lucali. We tried biscotti some after Lucali’s and I don’t think it is an exaggeration when I say that was the best biscotti I ever had. I did not know biscotti could be that good.

So had a little bit of a wait at Lucali but it wasn’t too bad. I’ve waited just as long if not longer outside of Pepe’s or Sally’s in New Haven. My impression of Lucali was that it was a pizza that needed to be eaten promptly and that the crust was kind of on the clock. I’m not sure I00% right about that. I’ve got to say dining with forum Member Jackie Tran (his first name is Chau and the bent spatula inside my propane oven was developed by him and then the forum named it after him - it's call a Chauflector) is amazing. He is very observant and it made me look and consider things I probably wouldn’t have caught on my own. I definitely enjoyed Lucali. Not sure it is 2 hour wait worthy (we didn't wait that long but people have) but I’d be OK with a 20-30 minute wait for the dining experience. I want to get their all beef pepperoni for my pizza. So flavorful. Like Sam’s, Lucali isn’t just the pizza, the space is fun and inviting, there’s a little velvet rope at the entrance, the wood oven is in back with a very open kitchen - it’s an experience. We got two small calzones, the one I had was delicious. The other appeared to be a little under cooked. Fresh basil is served on everything. One thing to note about Lucali is that after a day long pizza eating binge, I didn’t hesitate to take a full slice from each pizza. When we were done with pizza, I think I could have had another slice but the calzones were on the way and while the mind was still thinking about pizza, it was probably for the best to be done. 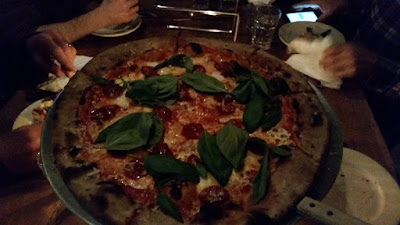 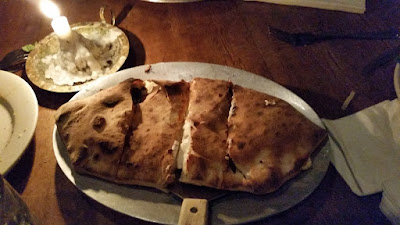 One of my favorite pictures of the day was up on Paulie Gee's Instagram feed. It feels like it captures the Lucali experience. 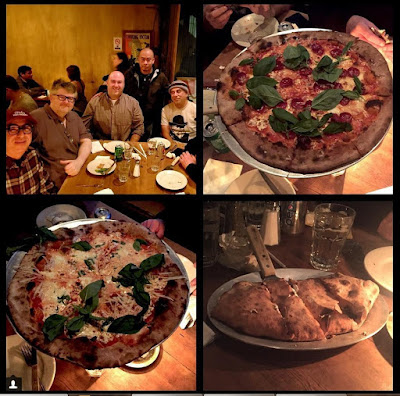 After Lucali we split up to head home. I was lucky enough to hitch a ride back to the Croton train station with a member that lives nearby. Even the ride back was enjoyable. Talking about the day, pizza, life family with a new friend. What an amazing day. I’m so glad I was able to join part of this tour. I say part, because it was four days long. It wrapped up earlier this afternoon. The pictures from today look good. I'm waiting to read about it on the forum. It might make a nice little family tour.
Posted by Jon in Albany at 10:40 PM